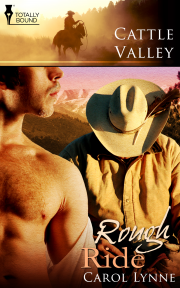 Book 4 in the Cattle Valley series

For rancher, Ezra James, life is pretty simple. He wakes before dawn and spends his day working with the cattle he loves. For twenty years, the EZ Does It ranch has been enough to drown out his loneliness and guilt. To the world, he appears impervious to everything. The only chink in his armour - the man who owns the clothing store in town.

Palmer 'Wyn' Wynfield caught Ezra's eye the first time the rancher stepped foot in the store. Though Ezra knew his large size intimidated others, his little self-confidence was shattered when Palmer backed away in apparent fear. In a moment of self-preservation, he referred to Wyn as Mr. Fancy Pants. That was six years ago, and he's never been forgiven.

An early morning phone call changes all that. Though the line is scratchy, Ezra definitely hears the words he's been waiting to hear for years. "I need you."

Cradling his sore jaw, Wyn picked up the phone and called his best friend, Nate.

“Nope, just getting ready for bed. How’re you doing?”

“Not good. Dad’s funeral was tough.” Wyn knew if Nate was getting ready for bed, it was indeed a bad time to call. Still, he needed help. “I got jumped when I went into town for supper.”

“Jumped? By who? I thought you said Pamona was a sleepy little town in the middle of nowhere?”

“It is, but there’s a group of guys that don’t think much of the town queer coming home.”

“Yeah. Anyway, I was wondering if I could get you to come down until I can get things wrapped up around here. I hate to sound like a wuss, but I’m no match for a group of rednecks.”

“Ezra? Who said anything about him?” Wyn had tried his best to not think about that man, or the tender kiss they’d shared on Christmas Eve.

“Look, Wyn, you gotta call him. Not only is he the right man to help you get the ranch in order, but he’s been walking around like a bear with a sore paw since you left. Besides, do you know anyone more intimidating than him? He’ll keep the rednecks at bay.”

“He won’t come. I imagine he’s still mad about that little prank you pulled with the cookie bouquet.”

“Naw, I finally got that all worked out. Cost me a couple bottles of single malt scotch, but it was worth it to get the dragon off my back.”

“Ezra giving you a hard time was he?”

“No, Ryan. He said it was my mess to clean up and nagged for days on the subject.”

Wyn chuckled. God he missed Nate. No matter what, Nate could always make him laugh. “So you really think I should call Ezra?”

“You don’t think he’ll see it as me chasing him?” That was the whole reason he hadn’t called Ezra after Christmas Eve. The kiss had been phenomenal, but as soon as they parted, Ezra gave him a funny look and walked out of the hall. He’d waited for several weeks for a phone call or visit from the big man, but nothing.

“Just do it, Wyn. You and I both know he’s the best person for the job. If you two can’t get your shit together, give me a call back.”

“Don’t mention it. Ever. Especially to Ryan,” Nate added.

“My lips are sealed.”

Wyn hung up and looked at the clock. Deciding it was too late to call Ezra, he turned out the lights and headed upstairs.

The ringing phone woke Ezra from a sound sleep. With a growl, he reached over and fumbled with the cordless handset. “Hello,” he grunted.

Ezra sat straight up, wide awake. “Wyn? Is that you?”

“Yes. Sorry to call so early. I forgot about the two hour time difference.”

There was a moment of silence on the other end of the phone. “My dad died. I came down to make burial arrangements and see about the ranch. But things keep going wrong, and there’s a group of guys in town that keep threatening me. I’m sorry, Ezra. I know you have your hands full with the EZ Does It, but I don’t know who else to call for help.”

Ezra felt his blood begin to heat. “What’s going on with the guys from town?”

He heard Wyn breathing heavy like he was getting worked up again. “I grew up here. They didn’t like me then and they sure as hell don’t like me now.”

“That’s part of it, but I never fit in here. It’s the reason I left home as soon as I was old enough.”

“Have they hurt you?” Ezra asked around the lump in his throat. If there was one thing he couldn’t tolerate, it was big folks pickin’ on littler folks. It was worse this time, because it was Wyn these town fellas were harassing.

“Nothing permanent. I know we haven’t exactly been friends, but I really would feel safer if you could come down and help me get the ranch ready to sell.”

Nothing permanent? “I’ll be down as soon as I can get a flight.”

“Thanks. Hopefully it’ll only take a week or so. Will that put you into a real bind with your place?”

“No. I’ve got people to look after the ranch. Can you pick me up at the airport, or should I rent something?”

“I will. Hang on and I’ll find a piece of paper to write your number down.” Ezra swung back the covers and climbed out of bed. Digging through his top dresser drawer, he came back with paper and a pen. “Okay,” he said.

Wyn rattled off his cell and the ranch numbers.

“Got ‘em. Let me get showered and make a few calls. I’ll let you know when I have a time.”

“I can’t tell you how much I appreciate this,” Wyn said.

The tone of the man’s voice almost broke his heart. Usually Wyn seemed so confident, but just now, he sounded like a lost little boy. Right or wrong, Ezra couldn’t wait to wrap him in a protective embrace. Just let one of those fuckers try to touch his Wyn with him around. It had been years since he’d had a good fight.

5 out of 5! Ms. Lynne has continued her series with another book that once again brings to life the heart and soul of the people living in Cattle Valley... I will be waiting for the next installment...

This is book four to this amazing series however they should be read in order so that you get to know the wonderful characters. Characters that you will come to love. Each one has th...

Share what you thought about Rough Ride and earn reward points.