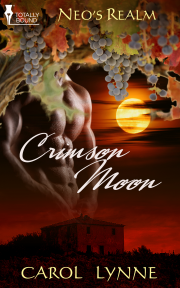 Book 3 in the Neo's Realm series

After his capture by a rogue vampire coven, Gunnar, alpha werewolf and head of Neo's Realm security, was viciously turned into a vampire. Although Gunnar was eventually rescued, he refuses to accept the vampiric side of himself.

Centuries earlier, Ramiro was also changed against his will, but he's learned to accept himself and make the best of his new life. He knows he has his hands full with Gunnar, but there is something about the confused werevamp that pulls at his once-human side. As head of security for the vampire king, Ramiro has the reputation of being a cold-hearted warrior, but he wasn't always that way. As he continues to coach Gunnar through the transition, he begins to yearn for things he hasn't wanted in centuries, love.

Gunnar hates being seen as weak by Ramiro. Never has he allowed someone to take care of him, especially someone he considers an equal in battle. Giving in to his body's desires won't come easy, but Gunnar begins to fear for his own sanity if he continues to push the vampire away.

His nose buried in a book, Ramiro Delgado lazily rested his hand on the blond head of the fae who was currently sucking him off under the table. The Frenzy, the neighbourhood feeding bar in The Realm, only had a few patrons this early in the evening, and Ramiro planned to take advantage of the calm before the rush.

The tongue flicking the head of his cock was delightful, but when Ramiro felt the fae trying to work magic by probing his hole, Ramiro grunted. “Stick to the cock, kid.”

Kid? Ramiro shoved away that particular image. The little fae under the table was probably twice his age. There was just something about the spritely-looking fae that made him think of them as younger.

Ramiro waited until he heard the fae cry his own orgasm before pushing his chair back. He stood and stuffed his softened cock back into his suit pants. “Thanks.” He took the time to brush his palm over the fae’s cheek before picking up his book and heading out of the door.

As he walked towards the palace, Ramiro’s thoughts went to the book in his hand. It was an ancient diary-of-sorts that he’d found in The Realm’s archives. It was more-or-less an instruction manual, full of ideas on how to retain humanity after being turned.

Although Ramiro was supposed to be looking for ways to defeat the hybrid creatures Morwyn had created, it had given him an idea. He stepped up to the gate surrounding the palace Ian Kildare had created, and waited. Because of the strong wards surrounding the palace, there was no need for a guard at the gate. Only those imbued with the proper clearance could enter without instant evaporation. With so many magical creatures living in The Realm, other forms of identity clearance just weren’t feasible.

Ramiro entered the King of the Vampire’s palace with purpose. “Where’s the King?” he asked one of the guards under his command.

When he reached his destination, Ramiro stopped at the closed doors. “When you have a moment,” he called through the heavily carved wood.

From within, a cry of release sounded. “Enter,” Ian ordered.

Ramiro opened the door just as Ian pulled his robe closed. The human on the table in front of him was naked, as usual, with a sated smile on his face. The quickly-healing holes on the human’s neck told Ramiro, without words, the King had just fed from the man.

Holding up the book, Ramiro approached the head of the table. “I was wondering if I may speak to you about something I’ve just read?”

“Of course.” Ian settled himself back into his chair. “I see you’ve found my diary. I must’ve been mad to give that over to the archives, but I was young and stupid at the time.” Ian claimed to be the first vampire, Faelan, the mysterious King of the Fae had created. Because no one had ever stepped up to contest his claim, Ramiro believed him.

Ramiro took a seat close to Ian. The two of them had become close friends over the years, and although he showed Ian the utmost respect in front of others, when it was just the two of them he could cut out the formalities and talk to Ian as a friend. He glanced at the Royal Donor on the table. Ian was the only vampire in The Realm allowed human donors, and the smell of the human’s blood called to Ramiro. He swallowed the saliva pooling in his mouth and tried to concentrate on the reason he’d sought Ian’s expertise.

Ian chuckled and reached out to caress the inner thigh of his donor. “Would you like something to eat?”

Yes, Ramiro wanted to scream, but he knew it was forbidden. It was punishable by death for any vampire to drink from one of the Royal Donors. “Thank you, but I’ve already eaten once this evening.”

Again, Ramiro tried to get his thoughts on track, while Ian continued to stroke the man in front of him. “I seek your advice, old friend.”

“Then you shall have it,” Ian answered.

...full of twists that help move the series forward...an excellent addition to the Neo's Realm series...

You will feel as if you are there with the characters taking a stroll through the woods, or camping out waiting for the enemy...This story is truly one of inspiration...

Share what you thought about Crimson Moon and earn reward points.