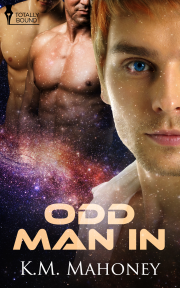 Three men, one spaceship, and a whole lot of trouble. The universe is never going to be the same.

Daior Mathews is having a bad decade. When he's captured and held hostage, he figures things can't get much worse. After meeting Terran, a fellow prisoner and the most adorable man he's seen in years, Dai believes his fortune might be changing at long last. He's looking at Terran, Terran's looking back, and it looks like he's finally getting lucky. But that's before the situation takes a turn for the worse and Daior is forced to call an old lover for help. Now Dai's on the run with his new boyfriend, and his old friend Tam is eyeing said boyfriend with lustful eyes.

So what's a space mercenary to do? Take them all to bed, of course. And that's when the fun really begins.

It wasn’t the first time he’d been snagged. And it wouldn’t be the last time, either. Daior Mathews had been told on many occasions he had a real problem with authority. He always replied that it wasn’t a problem but a really intense distaste. Authority and organisations. And politicians. And dentists. He wasn’t too fond of dentists. Hell, he didn’t like anybody, really.

So when the guards opened the door and tossed him a companion, the kid flying through the air like a freaking trapeze artist—with the greatest of ease and a really hard landing—Dai should have minded his own business. Could have. Should have. The story of his life.

But Daior just never learnt. When that kid hit the ground at his feet, looked up at him with those pale blue eyes... Hell. Daior had a feeling his life had just become a great deal more complicated.

He sighed, leaned over, grabbed the kid by the shoulder and hoisted him upright.

“Kid,” he said. “Didn’t anyone ever tell you that you need wings to fly?”

The kid dusted himself off. “People keep saying that.”

“And you keep trying to prove them wrong?”

Daior snorted. The kid had quite a mouth on him. Daior liked it.

The kid grinned at the sound. “I’m Terran,” he said. He tilted his head back, studying the grey stone arching over their heads. “So, where are we, and how do we get out?”

“We’re in a private complex on an unnamed planet in the Delta Sector.”

In Daior’s opinion, ‘planet’ was being generous. The blasted rock was way too small to manage enough gravity for a stationary orbit or a semi-comfortable living environment. Heck, he’d seen asteroids larger. It must have one hell of a density to make up for it. Daior had pretty much covered the whole thing during his last escape attempt. It had only taken him about twelve hours, with the exception of the blasted mountain. No way was he climbing a mountain. That part he’d left unexplored. Nature wasn’t really his thing.

Terran kicked at the wall, crossing his arms and scowling. He was probably attempting to look ferocious, but his features were far too fine and, well, cute for that. “This wasn’t exactly how I planned to spend my weekend.”

Daior watched bits of rock skitter across the rough floor and his mouth quirked. “Not exactly my idea of a good time, either.”

“You never answered my other question,” Terran pointed out.

“What question was that?” Daior could feign ignorance with the best of them.

Terran started chewing on his lip, foot jiggling nervously. “What do you mean, we don’t?”

“This planet’s about as big around as a nutshell. No place to hide. And no available ships to get us off, either. We’re effectively stuck.”

“With me? Something they aren’t gonna get. You? Damned if I know.”

Terran wrapped long fingers around his slender hips and glared, his blue eyes like icy fire. “What do you know?”

This book was so much fun! Loved it! Mahoney did choose a frequently used trio of personality types; however, she made it her own and did not write a cliché. I love her sense of humor, and if you can...

Share what you thought about Odd Man In and earn reward points.