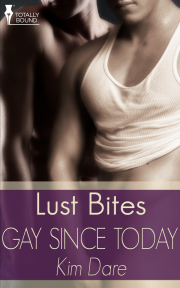 Tyler knows he's wasting his time fantasising about Ford. The guy he's had a crush on for months might make a wonderful dominant, but a straight dominant never did a gay submissive any good. It's time he stopped wasting his history lectures wondering what his life would be like if he belonged to James Ford.

Ford's had enough. A man can only stay in the closet for so long. It's time he came out and made his peace with who he really is. And if he can get a date with the cute guy from his history lecture, so much the better.

His friend didn’t take the slightest notice of his attempts to ignore him. “I’m not being funny. He’s gay,” Ryan repeated.

Tyler held back a sigh. Okay, so he could admit it. He had a crush on the guy. And yes, he could put up with his friend’s teasing—especially since he was well aware that he was making a complete fool of himself over a man who didn’t know he was alive. But still, if they wanted to wind him up, they could at least put a bit of effort into it.

Tyler pushed his chair away from his desk and spun around to face his friend. “Gay? James Ford. Is he, really? Since when?”

“Since today! He is officially gay since today. Now will you please stop being a stubborn pillock and get down to the damn bar before someone else snatches up the guy you’ve been obsessing over for months!”

Tyler rolled his eyes and abandoned the idea of getting any tiny bit of work done until he gave in and fell for whatever trick they wanted to play on him before the rush of stupidity that would surround April Fool’s Day tomorrow. Grabbing his coat and his keys, he headed for the door. Ryan remained hot on his heels, still babbling away even though they both knew he wasn’t listening to a word of it.

It wasn’t entirely a coincidence that Tyler had chosen to take up residence in the student halls directly opposite the most popular gay bar at the university. It was a decision that had proved very convenient on numerous occasions—like that night. Within minutes, Tyler was striding through the door, ready to give his friends a very large piece of his mind regarding the appropriate use of practical jokes when a guy had an essay due in the next day.

James Ford stood on the other side of the room.

Tyler’s feet stopped moving him forward. All he could do was stare.

When you want to read some male/male romance with spice, you will want Gay Since Today. This is book six in the G-A-Y series, but it can be read alone and enjoyed completely.

The sex scenes are super-hot and well written. The emotional scenes are riveting and compel you to turn the pages to find out what happens next...I have enjoyed each story in this series and my only...

Share what you thought about Gay Since Today and earn reward points.