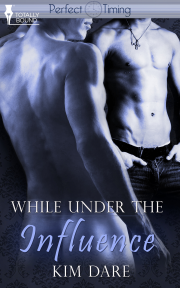 While Under the Influence

Book 6 in the Perfect Timing series

A natural follower meets a natural leader. The only question now is who will have the biggest influence over the other?

Elijah is a natural follower, but he's never thought too much about the way he lets his cousin talk him into all kinds of crazy schemes. What he has thought about, a lot, is the fact that he's pretty sure he's not entirely straight. When a drunken game of truth and dare sees Elijah's cousin, Louisa, find out he might be gay, her influence leads him straight into his favourite sexual fantasy.

As meddling family members, former submissives and large amounts of alcohol all come to bear on them, Elijah and Aaron are about to find out just what sort of influence they are destined to have on each other.

Elijah March knocked back another shot of vodka, then squinted as he did his best to focus in on his cousin.

Louisa tossed her drink back with a great deal more co-ordination than Elijah had been able to manage for at least an hour and a half. There was a good reason why he’d sworn off playing drinking games with his cousin. Unfortunately, at that particular moment, Elijah was far too drunk to remember what that reason was.

Blinking uncertainly at the girl who’d been his best friend ever since they’d started school, and who’d been getting him into trouble for just as long, Elijah pulled himself into a more upright position on the sofa and brushed his hair back from his face.

The wavy chestnut strands were too long. They kept falling in his eyes. Maybe that was why Louisa looked blurry! Elijah smiled, pleased he had solved that particular mystery.

"Truth or dare?" Louisa repeated, flicking her own blonde mane over her shoulder as she reached for the vodka bottle again. She must have spilt quite a bit of it at some point, Elijah decided, because there was a lot less in the bottle than there should have been.

Opening his eyes very wide as he tried to resolve Louisa’s image into one person rather than two, Elijah considered his options. Louisa had one hell of a strange sense of humour when it came to dares.

From what Elijah remembered of their last night out together, he’d ended up stark naked on a building site. It had been damn cold there too. At least they were tucked away safely in their shared flat this time. There was a greatly reduced chance of getting a chill. But still…

"Truth," Elijah finally said, with all the confidence of a man who had more alcohol than blood flowing through his veins.

Elijah bowed his head and covered his face with his hands. He knew that smile.

He was pretty sure this was how the pretty blonde heroine in the horror films felt when she decided to wander into the dark, scary forest in search of her pet kitten, or whatever. Elijah knew he was going to get slaughtered, but there really wasn’t any way to change the role he was destined to play in the scenario.

“Drink your shot, Eli. Get some courage in you,” she ordered.

Elijah peeked between his fingers just in time to see Louisa toss back yet another shot.

Louisa laughed, kicked off her shoes and tucked her feet underneath her, making herself completely comfortable on the opposite sofa. “My favourite fantasy…” she mused. “The company football team.”

Elijah straightened up, a frown gathering on his brow. If he was going to confess his own worst sins, he’d be damned if he didn’t get some good mileage from Louisa in return. “You said we had to give details. Who from the football team?”

The image of the Clarkson Financial Services company football team sprung up inside Elijah’s head. He had to admit there were some really fit guys on there and—

“All of them, of course!” Louisa giggled with glee at the idea. “I’d take them all, one after another. Form an orderly queue, boys, there’s plenty for everyone!”

Elijah shook his head, not sure he wanted to hear any more, but it made no difference. Louisa was already well into her stride.

“We’d all be in the changing room after they’ve won a big game. I’d give the man of the match the first turn with me, then just work my way down the line.” Louisa walked her fingers daintily along the arm of the sofa as she spoke. “I’d start with my back pressed against the lockers, my legs wrapped around the team captain and his cock buried as deep inside me as he can get it. Once I’ve come a few times, I’d move over to the wooden bench running down the middle of the room so a couple of different guys could get their hands on me at the same time. We could all finish off in the showers, and I’d be trapped between as many slippery soapy bodies as I can squeeze in under the spray.”

Louisa closed her eyes. Her head dropped back to rest on the high back of the sofa. “All those naked fit men, all of them pumped up from their big win. So much adrenaline, so much testosterone, and so many possibilities… Sometimes, I imagine the guys getting so worked up they can’t control themselves and start to mess about with each other while they wait their turn for me.” She let out a satisfied little sigh as she opened her eyes and turned her attention back to Elijah.

Finally regaining control of his slack jaw, Elijah closed his mouth. “And to think, you used to be such a nice girl…”

Louisa laughed out loud. “No, sweetheart. You are a nice boy. I am, and always have been, a complete slut.”

Elijah helplessly pictured his Aunt Susan’s face. “Your mother would turn in her grave, and she’s not even dead yet.”

“A slut, Elijah,” Louisa announced, in the tone she always used when she was attempting to educate Elijah about the big bad world, “is merely a woman with the morals of a man.”

another huge winner for Kim Dare. This is a story filled with love; it is the story of really decent people trying to do the right thing for those they care about...For all who enjoy a good love story,...

Watching these two fall in love brought a smile to my lips and made me believe in true love. I really enjoyed reading their love story.

Share what you thought about While Under the Influence and earn reward points.