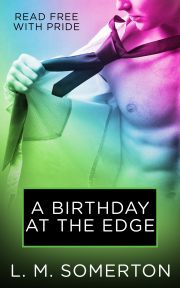 A Birthday At The Edge

When Olly's master, Joe, gives him a camera for his birthday, Olly gets up to all kinds of mischief with it. It might be Olly's special day but that doesn't exempt him from punishment. After a day of presents and treats, Olly expects Joe's discipline to be the icing on the cake, but then he discovers that candles aren't just for making birthday wishes…

This was a nice little story to spend a little more time with some favorite characters. Nothing really new but still fun and worth the price :-)

Share what you thought about A Birthday At The Edge and earn reward points.