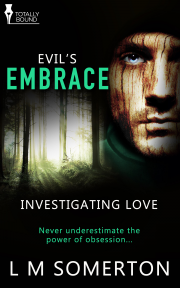 Book 2 in the Investigating Love series

Never underestimate the power of obsession.

After the trauma of the Rasputin case, Detective Inspector Alex Courtney and his boyfriend, Detective Constable Conor Trethuan, are in desperate need of a holiday.

The peace and tranquillity of Cornwall can’t eradicate Conor’s nightmares, though, and the unbearable prospect of losing Alex drives him to confess feelings that he isn’t sure are reciprocated. Alex responds in the best way he knows how—by issuing orders and claiming Conor’s body as well as his heart.

Prematurely recalled to work, they are thrown into a dangerous trafficking case focused on a leather bar with a hardcore reputation, Spikes. Conor is sent in undercover, not knowing that he is only a decoy. When Alex learns that the motivation behind his team’s involvement in the case might not be as straightforward as it seems, he realises that his actions might jeopardise not just their relationship, but Conor’s life, too. A shadowy figure from Conor’s past is about to step into the light.

​Detective Inspector Alex Courtney straightened his dark red spotted tie and smiled as he remembered the alternative use it had been put to just that morning. It certainly looked better wrapped around his boyfriend Conor’s wrists than it did around Alex’s neck. Neckties were an unfortunate necessity of his job and rank, though Alex had no clue how partial strangulation made him a better detective. Even the tie couldn’t dampen his mood, however. His morning’s adventures in the bedroom were not the only reason for the smile on his face. It had been four months to the day since his team had brought down the serial killer Rasputin, and he and Conor had finally found a space in their diaries to take some well-earned time off. Alex couldn’t remember the last time he’d looked forward to a holiday so much. Just a few more hours and he would be heading for Cornwall and hopefully some late summer sun, with the most gorgeous man in the world.

Alex just had one more job to do. He closed and locked his office door then headed downstairs to the room his team occupied. He’d scheduled a meeting for the last half hour of the day so that he could escape immediately afterwards. When he got there, they were all waiting expectantly. Alex was on the verge of making up some excuse and just leaving, but he met Sergeant Higgs’ kindly gaze and steeled his resolve.

“Make yourselves comfortable, lads, I’ve got a few things I need to say.” Alex perched on the edge of a table and waited while the four men in front of him settled into their seats. “First of all, I want to thank you all. The last four months have been challenging to say the least. I’m happy to say that the Rasputin case has now been handed over to the legal team and we can forget about it until they need us in court. Several small forests have been sacrificed to the paperwork that went with this case and I really appreciate your dedication to making sure we got it right.”

There were a few low grunts and a smattering of applause. “Now, I’ve got used to the constant complaints from you all about Conor’s absence. Apparently the quality of the tea has reached rock bottom and rebellion is brewing along with the over-stewed tea bags. Anyone would think I’m keeping Conor away from work deliberately.”

“We know you want to wrap him up in cotton wool, boss, but he’d be much better off here with us. You know—straight back in the saddle and all that,” Sergeant Higgs said in a gruff voice.

“I’m really touched by how much support Conor is getting from you all. He’s obviously made quite an impression.”

“And not just on us, boss!” That comment brought a chorus of chuckles.

Alex held back a grin. “I don’t need to remind you that Conor hasn’t just fallen off a horse and the psychological damage of being held and tortured by a serial killer is not something to be underestimated. However, I am pleased to tell you that Conor will be rejoining you when we return from leave.”

Alex fought down some persistently flapping butterflies in his stomach before saying, “You all know that Conor and I are together. Neither of us wants that to interfere with the way this team works. If any of you think that our relationship will cause problems, Conor will request an immediate transfer to another team with no hard feelings. We’ve talked about it a lot and neither of us will be happy unless you are all comfortable. I know none of you are homophobic, that’s not where I’m coming from. I’d be saying the same if one of you was a woman that I was involved with.”

That got some low chuckles.

“Okay, that didn’t come out quite right, but you know what I mean!”

Higgs coughed and looked at his team mates for their approval to speak up on their behalf.

Alex clenched his fist tightly as Higgs began, “Boss, you can stop worrying. We all want the lad to stay. He’s a bloody good detective and he fits in well. None of us gives a shit what you do on your own time, and to be frank, you’ve been slightly less of a bastard since you’ve been with him. You work him harder than the rest of us put together, so I suppose the question is more whether he’ll put up with you?” Higgs’ face cracked into a grin.

Alex remembered how to breathe and sucked some oxygen into his lungs. “Well, that remains to be seen. They reckon a holiday is a test of any relationship, don’t they? After two weeks in each other’s company Conor may well be ready to kill me.”

“Just don’t expect us to pick up the investigation, boss!”

“They’re going to the arse end of Cornwall—don’t think they even have a police force down there, do they?”

“Course they do, there’s loads of crime. Seagulls pinching your sandwiches on the beach, aggravated assault by crabs when you dip a toe in the wrong rock pool—it’s all going on down there. Highly dangerous.”

Alex groaned. “I’ve already spoken to the boss. The Chief Inspector, and I quote, said she ‘couldn’t give a rat’s arse about who is doing what unless it’s against the law’. All she’s interested in is our case closure rate.”

“Stop worrying about us and get off home. We’ll look forward to seeing both of you back at the coal face in two weeks.” Higgs walked Alex out to the front desk and shook his hand at the door. “I’m proud of you, lad. You and Conor both. Now go and have the break you deserve.”

Alex drove home feeling almost euphoric. All his worries about the case, Conor’s recovery and the possibility that Conor might have to transfer divisions were gone. At least temporarily. Less than an hour later he had showered, changed into comfy jeans and a pale blue T-shirt and was sitting at the counter in his kitchen as Conor served up their dinner. Detective Conor Trethuan was, in Alex’s humble and totally biased opinion, the most beautiful man he’d ever set eyes on. Sipping a glass of nicely chilled orange juice he examined Conor from head to toe. Dark, almost black hair, nicely tousled—check. Gorgeous green eyes shaded by long dark lashes—check. The hottest body he’d ever had the luck to get his hands on—check. Conor put a plate of sea bass and vegetable rice in front of him—it could have been a fish paste sandwich for all Alex cared—and gave him a pained look.

“I wish you wouldn’t look at me like that.” There was a slight tinge of pink on Conor’s defined cheekbones.

“As if you want to rip my clothes off and toss me over your shoulder like some marauding Viking invader.” Conor clambered onto his stool and began to eat.

“Oh, like that. Well it would be difficult not to look at you that way, because that’s exactly what I would like to do to you. A bit of marauding in the evening is always a good thing.” Alex mulled over that idea as he ate. “Mmm. This is delicious. Of course I wouldn’t be able to stop there. Ravishing would have to follow.”

Conor nibbled at his bottom lip. “And what exactly would that entail?”

“Well… A gag, of course, and some nice thick rope to tie you down with.”

Conor rolled his eyes. “Of course.”

“You’d fight me all the way, obviously, so I’d have to subdue you with a good paddling. Show you who’s boss.”

Conor shifted on his stool and Alex gave him an evil grin. “I do love it when a captive struggles.”

“Yes, love.” Alex could clearly see the hard edge of Conor’s cock through the fabric of his jeans. He decided that they would continue this theme later, in the bedroom.

I loved the scenes where Conor finally lets go and enjoys his submission. Makes it all the better when he can relax into it. There was a wonderful conversation about collars and different ways of expressing...

The storyline in this book is really interesting, the police work seems real, the danger levels seem much more than the first book. The new case takes a turn or two that I really wasn't expecting. Very...

Share what you thought about Evil's Embrace and earn reward points.