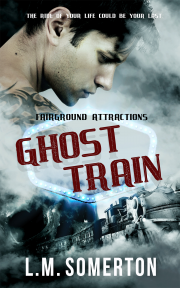 Book 1 in the Fairground Attractions series

The ride of your life could be your last.

Garth’s summer job running the ghost train at the local amusement park is supposed to be a stress-free way to earn some much-needed cash. His Goth looks are a bonus as far as his boss is concerned. The sunshine is a stark contrast to the macabre, spooky scenes inside the ride, but when one of the corpses proves to be more realistic than it should be, shadows are cast on the summer.

Clem sees potential in the moody fairground assistant with spiky hair and pretty blue eyes. He can’t wait to explore Garth’s submissive nature. But Clem isn’t quite what he seems and he might be all that stands between Garth and a violent death. Earning Garth’s trust won’t be easy in a world where secrets can mean survival.

“Four teas, my lovelies. Food’ll be out in a minute.” Mo, proprietor of the eponymous Mo’s Café, deposited her tray on the edge of the table before setting a steaming mug in front of each of her four customers. “You boys back for the summer then?”

“Why else would we be here taking in the delights of your homage to seventies décor, Mo?” Garth accompanied his words with a sweep of his hand, displaying black-painted nails. He got a clip around the ear for his trouble.

“Cheeky boy.” Mo grinned. “It’s good to see you. You all look the same—except you, sweetie.” She ruffled Stevie’s candy-floss hair. “This was blue last year, but the lilac suits you.”

Stevie blushed to the roots of his mop and started to play with the salt cellar. Zach squeezed his shoulder.

“It’ll go well with the products on your stall, Stevie.”

Stevie gazed at him, his silver-gray eyes huge. “I’m not working at the candy-floss concession this year, Zach. I’m going to be running the carousel.” He sounded proud.

“Wow! That’s quite a promotion. The carousel’s a prime spot and so much fun. Dad’s put me back on the helter-skelter, which I think is his way of telling me I need more exercise, and Garth is on the ghost train as usual.”

Garth grinned. “Where else would he put me?” He flicked an imaginary piece of lint from the shoulder of his black leather jacket. “I fit right in.”

“What is it they call all that black?” Mo asked. “Gouda, gaudy… No, neither of those sounds right. Ghastly?”

“He’s a Goth, Mo,” Zach explained, raising his voice to be heard above his friends’ laughter. Mo wandered back to the counter, muttering about weird fashion sense and clothing better suited to funerals.

Garth shrugged. “She loves me.” He extracted a black lipstick from his jacket pocket then applied a fresh coat. “Last year she asked me if I’d been an extra in Interview with The Vampire. That film came out in 1994. I wasn’t even born!” He sniffed and examined his fingernails. “What about you, Adam? What’s Zach’s dad got you doing this year?”

Adam pushed his shoulders back and stuck his chest out. “Security. Same as before. He said I have to keep you three in line.” He raised his mug of tea in a toast. “Though he also admitted it was a hopeless task.”

Garth gave his friend the once over, admiring his well-muscled physique. Adam looked exactly like the county and England rugby player he was. He was a head taller than the rest of them at six foot four. Garth only made six feet because of his thick-soled biker boots. Stevie, the smallest of the group, had topped out at five foot six and Zach only a couple of inches more. Stand them in a line and they made a great slope.

“You have more chance of convincing Mo not to serve black pudding with her full English. Never gonna happen.” Zach clinked his mug against Adam’s. “But have at it. Stevie at least will enjoy you telling him what to do.”

Adam’s half-laugh told them that he would enjoy that just as much. Stevie’s pale cheeks pinked.

“Don’t tease me,” he muttered, not making eye contact. “You’re no different.”

Garth had the chance to contemplate Stevie’s words as Mo arrived to deposit four heaped plates in front of them. His arteries hardened as he examined the fragrant display of fried food. He inhaled the aroma before stabbing a sunshine-yellow egg yolk with his fork. “This summer, we’re going to find the men of our dreams. Pride week will ensure there’s plenty of choice. It’s just a shame that blokes don’t come labeled. It would save a lot of time and angsting if you could just check a tag that said Dommy top, loves Shibari or Spankable sub seeks firm hand. That kind of thing.” He loaded his fork with bacon.

“So what would our tags say, genius?” Adam asked.

Garth raised a sculpted eyebrow. “I think Zach is the man to answer that one.”

Apparently realizing he was under intense scrutiny from all three of his friends, Zach chewed, swallowed then took a swig of tea.

“What about me?” Garth asked.

Scowling, Garth stuck his tongue out. Zach was spot on.

Zach chewed on a piece of thick sausage, looking as if he were thinking it might provide suitable inspiration. “Over-protective Dom needs sub to take care of. Love of chastity essential.”

Adam shoved a loaded fork into his mouth. He chewed and nodded in tandem. “Tag me now. I’m in.”

“So what would your label say, Zach? Do you know yourself as well as you think you know us?” Garth asked. “It’s one thing to describe your friends’ kinks but entirely another to admit your own out loud.”

“Zach only has eyes for one man,” Stevie said. “A certain tall, dark professor in the maths department.”

Garth and Adam murmured their agreement.

“Professor Raynott is gorgeous,” Stevie admitted. “But scary. I don’t think I’ve ever seen him smile. Is he even gay?”

“He has a rainbow sticker in the back window of his Audi,” Zach said. “I live in hope.”

“Stalker!” Stevie waved a knife at him.

Zach shrugged. “My gaydar is non-existent. I wanted to know if I was barking up the wrong tree.”

“More like an over-enthusiastic puppy peeing on the trunk.” Adam snorted tea. Garth and Stevie fell about laughing.

“I’m glad you all find my love life, or lack of it, so amusing.” Zach chuckled. “Even if I don’t hook a duck with the hot professor’s number on it, the summer promises to be entertaining.”

“True,” Garth agreed. It wasn’t raining, Mo’s breakfast was scrummy and he had two months to earn some cash and have fun with his friends. If any of them got lucky in the love lottery, they would celebrate together. “Life is good.”

Squeeeeeeeeeeee!!!!! I love L.M’s books! And I love her more now because she inadvertently made a goth Olly. And his name is Garth. And they need to meet. Garth and his friends have already been...

Share what you thought about Ghost Train and earn reward points.

Other books in the Fairground Attractions seriesView Series Page