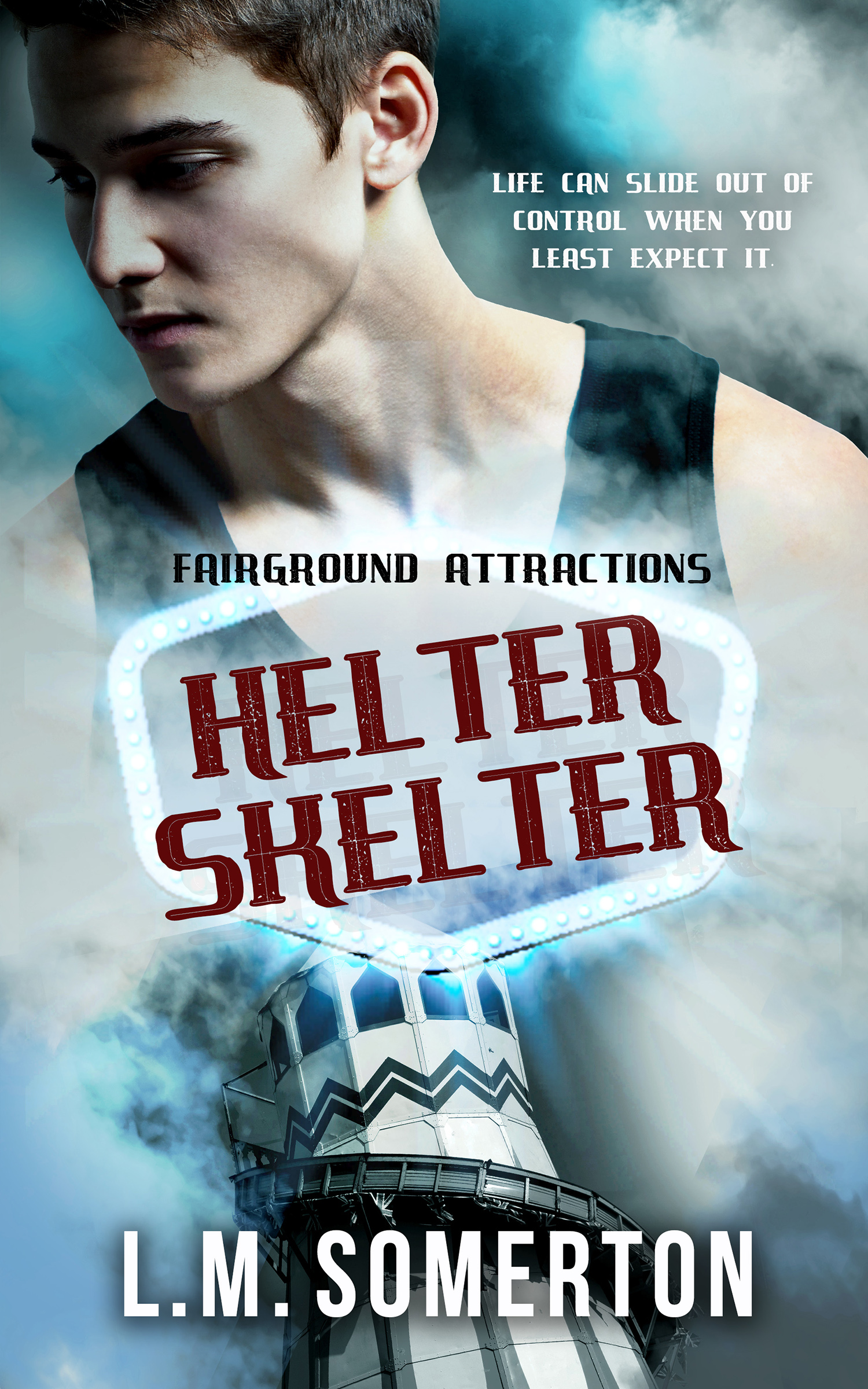 Book 3 in the Fairground Attractions series

Life can slide out of control when you least expect it.

Of his group of friends, Zach is the only one yet to find his kinky-ever-after. The contract killer, Harlequin, is still on the loose, Zach’s dad is ill, a result of the stress caused by knowing the family amusement park is being used as an exchange point by drug runners, and Zach is faced with problems much tougher than the mathematical equations he’s used to.

Daniel Raynott has had his eye on Zach for some time. Now that Zach is no longer in his class at the university, he can act on his instincts and give Zach the guidance he desperately needs. As a Dom, Daniel demands obedience. As a man, he falls hard for Zach’s vulnerable innocence.

A boring summer has a lot of appeal, but Zach has about as much control over events as he does a trip down the helter skelter. He finds himself in danger more than once. Will Daniel be able to protect him or will the holiday season culminate in tragedy?

Zach dragged his feet as he walked along the beach, stooping every now and again to pick up a pebble to launch into the waves. He was distracted, with far too much on his mind to admire the way the morning sun glittered on the water, turning blue-grey to gold. It was already warm, the clear sky promising a fine day—perfect for spending by the side of Clem’s pool with his friends. At least it would be if his thoughts weren’t haunted by his father’s exhausted pallor over breakfast and the undercover police operation going on at the amusement park his family owned. Two of the friends he was on his way to meet had been hurt, the contract killer known as Harlequin was a constant threat and, worst of all, Zach was still single while Garth, Adam and Stevie were all hearts and flowers. Well…more butt plugs and bondage, but the sentiment was the same. They had found love and Zach was green with envy.

He walked closer to the sea, letting the shallow waves wash over his feet. He wore shorts, a faded T-shirt bearing the slogan Maths rule #1—if it seems easy you’re doing it wrong, and carried a pair of battered deck shoes in one hand. In a backpack over his shoulder were a few offerings for lunch—three punnets of strawberries, a pot of clotted cream and a Tupperware box full of his mum’s homemade scones. His stomach growled. He’d had little appetite at breakfast but now, after twenty minutes’ steady walking, he regretted refusing anything cooked in favour of a bowl of Rice Krispies.

Clem’s house was at the far end of the beach, one street back from the seafront. With heavy legs, Zach fought the shingle to scramble up-slope to the sea wall. He sat on the bottom of some steps to put on his shoes, brushing sand and grit from his feet. After a final, wistful glance out to sea, he made the climb to the road then strolled the last few yards to Clem’s place. The side gate was unlocked, so rather than ringing the bell, Zach made his way down the side of the house to the back garden. Clem was lounging at a table on the patio. Adam, Stevie and Garth were already in the pool, tossing a rainbow-striped ball between them. To Zach’s surprise there was someone else at the table with Clem. Concealed by the shadow of an umbrella, he seemed to be deep in conversation with Clem. All Zach could see was wavy black hair and the back of the man’s light green polo shirt.

“Hey, Zach! Get in here. The water’s perfect,” Adam yelled from the pool. Zach wandered over to the side. He kicked off his shoes then dipped a toe in. His feet were hot so the water felt icy, but his skin soon cooled. He couldn’t wait to get in.

Garth waded over to the edge, so Zach crouched down to talk to him. Garth’s arm was wrapped in plastic, protecting the stitches beneath.

“Adam and Stevie only arrived a few minutes ago. You haven’t missed anything…other than the arrival of our sixth guest, of course. Clem invited him. I had nothing to do with it, promise.”

“Who is it?” Curious, Zach glanced over to the table. Clem gave him a brief wave.

Garth grinned. “I think you should find that out for yourself.”

“And I think if Clem knew you were being an annoying brat, he’d paddle your arse.”

“Been there, done that already this morning.” Garth shrugged. “My brattiness is as indelible as my waterproof mascara—not going anywhere.”

Garth scowled. “Some friend you are.”

“I’m exactly the kind of friend you need—the one who sees straight past the snark.”

“Go say hello to Clem.” Garth flicked water at him. “Then get your butt in here… You’ll probably need to cool off.”

Zach rolled his eyes, but he did want to say hello to his host as well as get the strawberries and cream into a fridge. He strolled across the patio, blinking into the sun.

“Good morning, Clem. I brought a few things for lunch. Is it okay to take them into the kitchen?”

“Morning, Zach. Of course you can, but first let me introduce you to our other guest, though I think you already know each other.”

Zach put his backpack on the floor then turned to the other man at the table. His mouth fell open and his burning cheeks had nothing to do with the heat of the sun.

“I think, out of the classroom, you can call me Daniel. We’ll save the ‘Sir’ for when we are better acquainted.” Daniel’s smile was definitely more of a smirk.

Garth had been absolutely right about Zach needing to cool off. He wanted to take a running jump into the deep end of the pool, submerge himself beneath the water and stay there for the rest of the day.

“I decided that since Daniel has an involvement in our ongoing dealings at the amusement park,” Clem said, “that I’d take the opportunity to bring him up to speed with what’s been going on.”

“You’ve been having an exciting summer so far,” Daniel said.

“I’m not sure I’d use the word exciting,” Zach muttered. “I should take these things inside.” He made a dash for the kitchen, glad to be out of Daniel’s line of sight. The tiles were cold against his bare feet and he took the opportunity to splash some water over his face at the sink. “If Garth knew about this and didn’t warn me, I’m going to make sure he experiences a slow, painful death.” He unloaded his backpack, stashing the strawberries and cream in the fridge and putting the box of scones on the counter. He put his backpack and shoes in a corner then debated how to get outside without being noticed. Daniel’s words played over and over in his head. The professor had always exuded an aura of command in lectures and that was no different in the more casual environment of Clem’s garden. Zach wondered if he were a Dom like Clem. The thought had crossed his mind before—it was part of the professor’s appeal—but he had no way of knowing. He wasn’t even certain if Daniel was gay. The rainbow sticker he’d seen in the back of his car could just mean he was an ally, though Zach hoped that the comment Daniel had made about addressing him as ‘Sir’ meant that he was everything Zach hoped for. Gay, dominant and interested. “Wishful thinking, idiot. Why on earth would a man like him be interested in me?”

If he hid in the kitchen much longer someone would come in to find him, so Zach padded outside. The patio stones were hot, in stark contrast to the kitchen tile, and Clem’s sun trap of a garden provided little shade. The pool looked very tempting.

“Take your clothes off and get in here,” Stevie yelled.

Zach ambled across to where sun loungers were positioned at the side of the pool. He stripped off his shirt, keeping his eyes firmly on his friends. Stepping out of his shorts took a bit more courage, knowing that Daniel was watching. His swimming trunks were modest, but fitted. They wouldn’t hide an erection. With that in mind, he took two steps to the edge of the pool then jumped in. At first the cold water was shocking and he surfaced gasping. He shook his head like a wet retriever, sending droplets in all directions.

“It’s fine once you’re in,” Stevie said, swimming over to him. “What do you think about your hot professor being here?”

“He’s not my professor and I’m trying not to think about it,” Zach said. “If I’d had any idea he was going to be here, I don’t think I would have been brave enough to show up.”

“Sure you would. He likes you, you know.”

“He hasn’t taken his eyes off you since you arrived. When you went into the kitchen, he kept looking inside. If you’d taken any longer, he would have gone in and dragged you out of there. He’s even dommier than Clem, and that’s saying something.”

“Who’s dommier than who?” Adam swam over to them. He encircled Stevie in his arms and Stevie nestled against him.

“What about me?” Adam asked, slipping his hand under the water to cup Stevie’s package.

“You’re the perfect Dom for me, love.”

“You two are sweeter than candyfloss,” Zach said. “And I think you’re right, Stevie. Daniel is more than a bit intimidating.”

“Doesn’t stop you lusting after him though, does it?” Garth suggested, grinning.

“Hush, he’ll hear you.” Zach sent an anxious glance toward the patio, where Daniel, staring straight at him, crooked a finger, beckoning Zach over.

“Someone is going to get his arse spanked before the day is out, I’d bet my pay check on it,” Garth said. “And I don’t mean me, ‘cos the odds on that are way too low to bother with.”

Zach swam the few strokes to the side of the pool where Daniel crouched.

“You need to put sunscreen on or you’re going to burn. Get out of the pool.”

It wasn’t a request. The rebel in Zach wanted to refuse, but he had forgotten to apply any cream that morning and did have a tendency to get pink rather fast. He clambered out of the water and walked across to one of the sunbeds, where a bottle of sunscreen sat in the shade underneath it.

Those boys of the fairgrounds should know how to stay out of trouble by now, but they seem to have it called to them like a magnet. Harlequin is still around watching and after Garth and Stevie alrea...

Share what you thought about Helter Skelter and earn reward points.

Other books in the Fairground Attractions seriesView Series Page