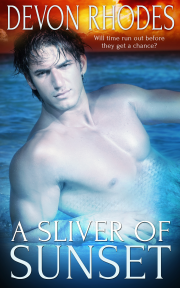 A Sliver of Sunset

From one-night stand to nurse and patient—is it crazy to expect more?

Angelo has somehow developed leukemia—the only paranormal ever known to do so—and the doctors are mystified as to the cause. The cure requires him to repress his shifter side with a chemical inhibitor and be entirely human while he goes through chemotherapy, which contributes to some interesting situations he never would have foreseen—things like ‘misplacing’ his favorite bar, Unconventional, and getting picked up by a human without realizing it’s his mate.

Dominic can’t believe his luck when bravely striking up a conversation with the hottest guy he’s ever seen leads to the best sex he’s ever had. When he wakes up—no surprise—Angelo is gone. A week later, he’s shocked when he walks in to meet a new oncology patient to find Angelo fighting for his life and dependent upon his care.

Will their timing ever improve, or will Angelo’s time run out before they get a chance?

Publisher's Note: This book has been previously released as part of the Unconventional in San Diego anthology by Pride Publishing.

Angelo took one last long look at the incoming waves then reached for inner strength as he rose from the sand and turned his back. It would be a long time until he felt the embrace of the sea again…if ever. It would about kill him to see the ocean every day and not dive into its cool, welcoming embrace.

Yeah, and it’ll definitely kill me if I do.

Although the last thing he wanted to do was laugh, he snorted. Life was really bizarre sometimes.

“You okay?” His sister Nezetta was hovering as usual. He’d told her he’d be okay going to the doctor by himself this morning, but she’d shown up while it was still dark to go for one last swim together. They’d made sure to come out of the water well before dawn then sat on the beach until it was time to go.

“No. But I will be once I get this inhibitor crap over with.” And the chemo to follow.

They began walking down the Pacific Beach boardwalk, dodging the occasional early morning runner or cyclist, passing a few sleeping homeless people who hadn’t been chased off.

“You want some coffee?” Angelo checked his phone. “Kono’s should be open by now.”

“What I want is for you to stop pretending that this is just some ordinary day.” Nezetta’s voice rose, but rather than angry, she sounded scared.

It was very rare that ocean shifters ever became sick, which is why he’d gotten to such an advanced stage of leukemia before it had been diagnosed. He’d lost weight, fought fatigue and made excuse after excuse for how rundown he felt. It had been so gradual that he’d forgotten that, as a paranormal, he shouldn’t be feeling any of those things.

Angelo stopped and took his sister into his arms. “I’m not pretending. You know I’m not the woe-is-me type. I’m just trying to enjoy the last couple of hours before everything goes…into unknown territory. ’Kay?”

She blew out a huge sigh. “I just wish I’d known how bad things were getting with you earlier. I mean…” Shaking her head, she didn’t bother to continue what they’d both gone over hundreds of times, it seemed.

They started walking again. “Yeah, well. Who knew, right? I’m the only one of us I know who’s even been sick, much less with something that could kill me. But hey, you know I’ve always been different.”

“You’re not that special. Get over yourself, Angel.” It was forced, but Angelo appreciated her effort at banter.

The truth was, she alone had noticed his low energy and change in behavior, but had told him later that she’d chalked it up to Angelo being lazy.

Then he’d come down with pneumonia.

He’d gone to a doctor who treated wereshifters, and she’d treated his illness but, concerned with his overall health, she’d sent a blood sample to a para-friendly lab for a CBC—complete blood count.

Everyone had been incredulous about the pneumonia, but the bigger shock was still to come. The blood test results had proven that his illness wasn’t a random fluke, that his people weren’t immune to human diseases after all. After taking into account the typical differences between normal blood and para blood, it was still impossible to argue with the diagnosis—one of the worst types of leukemia, affecting white and red blood cells as well as platelets.

He’d struggled and finally kicked the lingering pneumonia, but in a few short weeks, his numbers had worsened. The aggressive cancer called for an equally aggressive chemotherapy treatment. But given his shifter side, it would only work if he accepted a course of inhibitors to keep him human for the duration.

This is a very quick read, but manages to pack in a lot of story – and hope. It is moving, sensual and cute, and has a properly meaningful title. Although the paranormal elements are key to the p...

Share what you thought about A Sliver of Sunset and earn reward points.