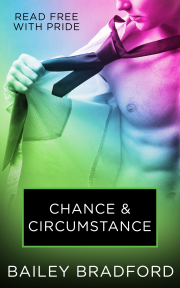 The cowboys from Rory’s Last Chance are back! Chance and Rory have been together for years, and their love has only grown stronger. Rory thought their age difference was something they’d both gotten past a long time ago, but a health scare brings the issue roaring right up to the front again.

Chance knows age doesn’t matter to Rory, and their age gap generally didn’t bother him, either, until fears that he could leave Rory alone at too young an age begin encroaching on Chance’s peace of mind. Rory has a big heart, and Chance knows he’s the center of Rory’s world. The idea of Rory being alone spurs Chance to make some changes in his life—and their joint life.

Share what you thought about Chance and Circumstance and earn reward points.