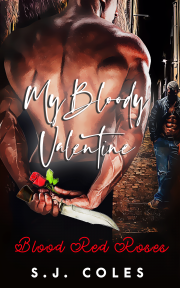 Rick feels like he’s finally getting his life on track…until a dead body in his flat threatens to derail more than his new career.

Things are finally looking up for Rick Bennett. He’s landed a job with Swanson and Gerrard, one of the top finance firms in London and, with it, a chance to pay off his father’s debts and finally make something of his life.

When he’s put in charge of brokering the biggest deal in the company’s history, he knows he can’t lose, even though his boss, Cecily Swanson, clearly wants more than just a professional relationship.

When a rich, handsome stranger, Kim Bailey, introduces himself to Rick at the Swansons’ New Year’s Eve party, Rick is thinking he can definitely get used to rubbing elbows with the upper set. He feels everything is finally working out, despite Cecily’s increasing interest that only seems to strengthen as they approach her high-profile Valentine’s Day wedding.

When someone is murdered in his flat, Rick is shocked but still determined to hold on to his dream. Cecily believes he’s innocent and, more importantly, so does Kim. Though he’s beginning to suspect that there’s more to the guy than meets the eye, Kim’s belief in Rick keeps him strong.

As the investigation continues and Rick finds himself buried deeper in a mess of conspiracy, betrayal and intrigue, he will come to wonder whether the life he’s dreamed of could ever be real.

Rick slid his key into the lock. It caught, again. The thing had needed replacing for months. But, for the first time in years, the thought of another financial outlay barely registered. He wrestled the door open and hurried inside. Ella rose from her seat at the kitchen table, a half-drunk cup of coffee forgotten amidst a drift of bills and credit card statements on the kitchen table.

Rick was quiet just long enough for her face to tighten then he smiled. “I got it.”

The worn lines of care at the corners of her eyes smoothed away. She laughed and flung her arms around him. He laughed too, squeezing her tight.

“This is it, El. We’re sorted…finally sorted.”

Ella wiped at the wetness in her eyes but her smile never wavered. “This calls for a celebration, right?” She went to the fridge and produced a bottle of cava.

“When did you get that?”

“Lidl had them on offer. Come on. A toast.” She poured the sparkling wine into two mismatched beakers and held one out. Rick took it, and Ella raised her own but then lowered it, her face growing serious.

She huffed out a breath. “Before we drink… Fuck.” Her expression darkened. “Sorry… It’s just I’d kick myself if I didn’t ask this…”

Rick sighed and gestured for her to continue.

“Are you sure this is what you want?”

“I’m serious, bruv. I know this feels like the answer. And I know Dad…” She took a breath then smiled a wan smile. “Dad would have been so chuffed. Beyond chuffed. But is this really, really what you want?”

“A job with Swanson and Gerrard is above and beyond ‘want’, sis.”

Rick glanced at the rack in the corner where his battered Martin acoustic, Fender Strat and Gibson Les Paul sat gathering dust. “Music was Mum’s dream,” he said softly, feeling a familiar clench in his chest. “But Dad was right. It was just a dream.”

“Money’s not everything,” his sister replied. Rick glanced at the bills littering the table. She followed his gaze and grimaced. “We could manage,” she went on. “We’ve managed this far.”

“We could find another home for Mum—a cheaper one, outside London. We could move back up north, even—”

“It’s not just the money,” he said. “This job means I’ve made it…finally made it.”

“Leaving now would be going backwards. I can’t go backwards.”

“The bloke did talk sense occasionally.”

She sighed. “All right, Ricky. So long as you’re sure. Cheers.” She clinked her glass with his. “In which case, enjoy your moment. Christ knows you deserve it.”

“We both do.” He drank. Ella drained her glass and poured another. “Don’t you have a shift tonight?” he asked.

“Not until six,” she said, topping him up. “And it’s not every day your little brother lands a job as a junior analyst with one of the biggest finance firms in the country, is it?”

“No, it bloody isn’t,” Rick said, a little grimly, and drank deep from his own glass, enjoying the light taste and the fizz. “My first payday I’ll get us some of the real stuff,” he added with a grin.

Ella’s eyes were bright again. “Last time I had real fizz was at my wedding.”

“That was Italian. Real fizz is French.”

“Champagne and caviar from now on, sis.” Rick winked at her, loosened his tie and sat, grateful to take his weight off his feet. He emptied his glass and reached for the bottle.

Ella sat next to him, pressing her lips together as he poured the last of the wine into her glass.

“So they really didn’t twig?”

“Would they have given me the job if they had?”

“I dunno,” Ella said, shrugging. “I don’t have the first clue about how these big places work. But you’d think they’d be the sort to know if you lied on your CV.”

“I didn’t lie on my CV,” Rick said carefully. “I just was…you know…selective with the details.”

“Swanson and Gerrard would never look at the likes of me without something to make it worth them looking.”

“But you could dance circles round anyone else,” Ella went on. “Dad always said you had an insane talent for this stuff. That’s all that should matter—not where you grew up or the fact that your first job was at Maccie Dee’s.”

“It shouldn’t matter,” he agreed, “but it does. But it’s fine. I got the job and I’ll do it well. They’ll have no reason to dig any deeper.”

“This merger they’ve got in the pipeline is worth several billion. They hired me because I know everything there is to know about Egerton, Baines and Russel. And that’s not a lie.”

“EBR…another finance firm. I studied them at uni for my dissertation. I can help Swanson and Gerrard make this the deal of the decade. Then I’m in for good. Five-figure salary from day one, plus bonuses. An advance bonus mid-January. Job security for life.” He pulled his chair closer to hers, and she raised her slightly worried eyes to meet his. “Believe me, El. I can do this. I owned that interview. Cecily Swanson even invited me to their New Year’s booze-up at The Savoy on Saturday.”

“Tell her what?” Rick asked, searching the half-empty fridge for his last cans of Stella.

Rick passed Ella a can and cracked open his own without meeting her look. “It’s not like that.”

“I saw the way she looked at you,” she said, the mischief she’d never completely lost dancing in her eyes. “Like a cat what’s got the cream.”

“She must’ve heard about your coconut cake.”

Ella gave him a sardonic look. “Or she followed you in.”

“Rick, I watched her do it. You came out of that bank with a face like a back of a bus—”

“And she watched you come down them steps, cross the road and followed you like a posh cat after a mouse.”

“I’m telling you. She saw something she liked. You think these West End types buy sympathy coffee for just anyone?”

Rick swallowed more beer, hoping it would drown the nervous tingling in his belly. “Even if you’re right, she’s engaged.”

“Everyone knows that engagement’s bollocks,” she went on, pouring her lager into the empty cava glass. “Harry Whateverhisnameis is the nephew of one of your new firm’s partners and cousin of some other.”

“Harry Gerrard-Hanson. Yeah, he’s related to one of the senior partners in EBR and to a former partner of S&G. These sorts of companies are always inbreeding. The marriage is why the deal’s on the table at all. So?”

“So,” Ella went on, flicking through something on her phone. “The wedding hype? The cover stories in People and Hello!? The huge ceremony at some stately pile on Valentine’s Day? It’s all a sham. The likes of Cecily Swanson ain’t gonna be sticking to no vows for this fat bugger’s sake.” She showed Rick a picture of Harry Gerrard-Hanson on some gossip site. His eyes were watery and dull, his hairline receding, his face and neck those of a man that ate too much and moved too little.

“There is nothing between me and Cecily Swanson.”

“I know you know that. I’m just not sure she knows it.”

“I can’t tell them I’m gay, El,” he said. “This shit matters in places like this, especially for someone like me. They’re…old school.”

“Okay, maybe. But if they can make our lives better, then screw what they think. We deserve this, right? You said it yourself.”

“So what happens when she finds out?”

“She might notice when you don’t fall into bed with her at this fancy-arse drinks party.”

“You’re worrying too much. So maybe she likes what she sees. She’s only human, right?” He smirked but at the look on Ella’s face sighed. “But whatever. You don’t give JA jobs to eye candy. She knows I can help land them this deal. That’s what’s most important to her.”

Doubt warred with the hope in Ella’s deep-brown eyes for a long moment. The hope won. “If you say so, bruv,” she said, brushing his lapels, “but maybe playing on it a little can’t hurt. So we need to take you shopping.”

Rick winced. “I don’t get my bonus until after New Year. And the last lot of care home fees maxed the Visa.”

“So I’ll pick up a couple of extra shifts. Oh, and I found a shop that’ll buy my rings for a decent price—”

“Rick, I’m doing this,” she insisted. “We’re in this together, remember? And besides…I’m ready to let them go.”

He took in his sister’s earnest expression. For a moment she looked so much like their mother his heart broke all over again. “Ella…”

“You know what I think about this walk-the-walk bullshit,” she cut him off, “but if you say you gotta play the game then I’ll help you play it…at least for now. And a big bit of playing a part is looking the part.”

Rick glanced down at his winter-sale Matalan suit and his father’s last decent tie and sighed. “Fine.”

“Atta boy.” She raised her glass. “To new beginnings.”

“To a new life,” he said, lifting his own, “and to dreams coming true.”

S. J. Coles is a Romance writer originally from Shropshire, UK. She has been writing stories for as long as she has been able to read them. Her biggest passion is exploring narratives through character relationships.

She finds writing LGBT/paranormal romance provides many unique and fulfilling opportunities to explore many (often neglected or under-represented) aspects of human experience, expectation, emotion and sexuality.

Share what you thought about Blood Red Roses and earn reward points.