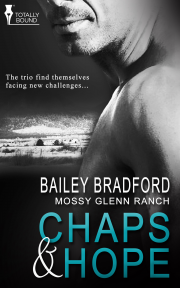 It'll take hard work for Carlos, Troy and Will to turn the Mossy Glenn Ranch into the successful business it used to be, and even more challenging will be making the place their home.

Carlos, Troy and Will met in Where There's a Will. They found each other and a love not many people could imagine. It worked for them, and they've been handed a chance at a new life and a home of their own.

The Mossy Glenn Ranch, owned by three siblings, Nick, Rory, and Annabelle, used to be flush with success. Then the previous owners destroyed almost everything, selling their heritage right out from under the three.

They bought part of it back, and asked Carlos and his partners to make the place successful again. It's a chance he grabs with both hands once his guys agree, but there are challenges for all of them, and Will's desire to make the place specifically LGBT-employee friendly and safe may cause more trouble than they already find when the get to their new home.

From a situation in town that reminds Will all too much of his own abusive past, to the surprising support of many of the townsfolk, the trio find themselves facing new challenges and reaching for the love and support that grows stronger between them.

"Wow, I don’t know about this," Troy muttered, looking out of the passenger side window. There were freakin’ mountains. They made Troy feel small and he didn’t like that at all.

"I think it’s beautiful," Will said, leaning against Troy. Will, lithe guy that he was, always sat in the middle of the truck’s bench seat. Will loved being in the middle, whereas Troy only loved it in certain situations—like when he, Will, and Carlos were all naked and fucking like bunnies. Troy pulled his gaze away from the intimidating ginormous mounds and cast it towards the stoic, chiselled cowboy driving so competently.

Carlos could be a mountain, Troy decided. Their mountain, his and Will’s. It had taken Troy a while but he’d come to believe he could depend on Carlos—and Will. Sometimes he thought he was the weak link in their relationship, but he tried not to let his insecurities get the best of him.

"I missed this when we were in Texas," Will continued, and he began to stroke Troy’s thigh, just teasing at the inside seam of his jeans. "South Texas is so damn flat, and dry, God, it’s awful. Nice people though." Will shifted and nipped Troy’s jaw, drawing every bit of Troy’s attention then. Will’s eyes gleamed with the knowledge that he’d just made Troy’s dick so hard he was surprised it didn’t drill right through his jeans. Troy knew Will’s expressions better than he knew his own.

"You two gonna put on a show, I might just have to pull over," Carlos rumbled, and Troy’s dick got just that much harder. Carlos was still looking straight ahead, watching the road, as far as Troy could tell. He either had awesome peripheral vision, or he knew his men quite well. Probably the latter, Troy thought as he sucked in a sharp breath. Will rubbing his balls was guaranteed to make Troy whimper unless he bit the crap out of his lips.

"We could put on a show for you, Cowboy," Will purred, using his pet name for Carlos. "Or you could pull over and join in, ’cuz I’m gonna be all over Troy and his big dick in just a few seconds."

Troy grabbed a handful of Will’s sweet, round ass with one hand and the Oh Shit bar with the other. He closed his eyes and leaned his head back, sliding down as much as he could. Someone—Will, most likely—unbuckled his seat belt, and Troy made another one of those embarrassing sounds as Will unfastened his jeans.

Hell, no one in their right mind would have been thinking about anything other than the two sexy men he’d been with, was still with. A little sunlight and possible exposure wasn’t going to stop any of them. Besides, Troy trusted Carlos to take care of them.

There was a subtle scent on the wind, an almost sweet odour that somehow added to Troy’s stimulation. Eyes closed, Troy moaned softly at the first flick of Will’s tongue over his slit. Everything else ceased to register when Will sucked his crown into the tight, wet confines of his mouth.

Troy’s worries along with his doubts and insecurities melted away under the skilled tongue and hard suction. He heard the metallic sound of Carlos’ seatbelt being unfastened then the grunts and murmurs as Carlos moved to lean over Will. His mouth was taken and ravished by the expert kiss Carlos laid on him. Troy quivered and keened as his balls drew tight.

"Not so quick," Carlos growled against his lips, following the command with a bite on Troy’s lower one. "Got us pulled over in a nice, private spot. No reason to rush this."

Troy would have begged to differ. He was desperate to come. Even so, even lost as he was in his own needs, he knew Carlos would have his way. Mainly because Troy and Will wanted him to.

"Mmm," Will hummed as he sucked Troy’s cock in deeper.

Troy gasped and Carlos was on him again, plundering his mouth in a kiss that was every bit as good as being fucked. Troy managed to get a handful of Carlos’ shirt, scraping his blunt nails over Carlos’ chest as he did so. His other hand he kept on Will’s tempting ass.

Will’s mouth was divine, but Troy wanted more. He needed to thrust and fuck and be taken—he needed to be in the middle now. None of his fears could slip into his head then, when he was being loved on like that.

"Want in," he panted, and hoped to God his partners understood. "Fuck me," was the best he could get out to possibly clarify his needs.

I really enjoyed this first story in the Mossy Glenn Ranch series. It had the love of three men, drama with some towns people, and action. It's a great beginning to a new series. Absolutely loved it.

I would give this book a solid 4.5 stars! After the end of the Love in Xxchange series, I had HUGE hopes that Bailey was going to continue on with the characters. Her series had pulled me into the...

Share what you thought about Chaps and Hope and earn reward points.