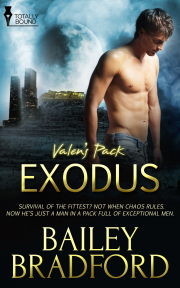 Book 2 in the Valen’s Pack series

Survival of the fittest? Not when chaos rules.

Rivvie does his best as beta, but he’s lonely and secretly nursing a broken heart. He fell for Matthew instantly, to no avail. Matt was too busy screwing every female in sight. He didn’t give one whit about Rivvie. Well, he told Rivvie he wasn’t interested. Rivvie just didn’t think he meant it.

Matt’s whole life has changed. He was the good son, the village hero, and the village stud. Now he’s just a man in a pack full of exceptional men. He’s a human—smaller, weaker and slower than the shifter males he lives with. External chaos has nothing on the internal crap he deals with every day.

When Rivvie and Matt are paired together for a task, sparks fly. It’s just possible that there’s more to sex—and more to Rivvie—than Matt ever suspected.

While Rivvie is dancing around an attraction to a certain human male, his brother, Valen is trying to lead his pack and take care of his own mate, Aaron. Just when he thinks he’s got everything under control, that very control is yanked from him by a powerful series of natural disasters, and soon Valen’s leading his pack on an exodus he’d never expected.

Integrating shifters and humans into one pack was trickier than Valen had imagined it would be—and he hadn’t thought it’d be easy in the first place. Despite the fact that the two species were indistinguishable in appearance—at least when the shifters weren’t wearing their fur—they were still very different from one another.

Especially when it came to nudity and sex. Gods, are they ever different. Valen wished the pack shaman, Lanaka, was there to help with the issues cropping up, but she’d insisted on taking a spiritual walk. Unfortunately, her spiritual walk also took place in her physical form. She’d left them a month ago, on the night of the full moon, saying she had to find the next shaman for her people.

That was another stressor. Lanaka looking for a replacement meant she knew her death was near at hand. Granted, she was old—really old—but Valen wanted her to stay with them forever.

And all his wandering thoughts were doing nothing to solve the immediate squabble between Jane Wyvern and Makisa. The two women snapped and insulted each other as if they weren’t standing in front of their alpha. Valen was the alpha of them all, human and shifter alike.

“Enough,” he roared when Jane raised her hand as if to strike Makisa.

“She keeps showing off her body to tempt my husband away!” Jane shouted, still holding her hand up.

Makisa, clad in the normal shifter garb—nothing—rolled her eyes. “As if I’d want that fat troll you call yours. I can’t help it if he looks. Considering you human females cover up every inch of your body, it’s no wonder your menfolk stare at us. It’s probably the only time they ever see a naked woman.” Makisa growled. “And you think you’re going to lay a hand on me? Bitch, I will take you to pieces!”

Obviously, he hadn’t yelled loudly enough. Valen wanted to bellow in frustration, but he didn’t. It hadn’t proved helpful the first time he’d done it. He stood abruptly, and instead spoke in a low, anger-filled voice, “I said, enough.” He let his frustration roll off him like invisible electric shocks. “You have come to me in my den, my home. Mind your manners. On top of that, I am your alpha and you will act with respect while in my presence.”

Oh gods, he sounded like the worst sort of man. Valen stood a little taller, pushing his shoulders back to make himself look bigger. In the animal world, respect had more to do with size and brute strength than anything else. It worked in the human world most of the time, too.

Both women had gone silent, Jane lowering her hand as well as her gaze. Makisa went down on her knees in a show of submission to the more powerful wolf. She trembled as she waited.

Jane bit her lip then knelt as well.

Valen felt like a complete asshole and dictator all in one.

“Kneeling isn’t necessary,” Aaron said, coming to stand beside him. “Respect and decency, on the other hand, are. How can either of you think for one second that how you are acting is acceptable? Did neither of you learn any manners when you were growing up?” Aaron nodded at Jane. “I know for a fact that your mother would be appalled. She was one of the kindest people I’ve ever met. Yet here you are, behaving this way.”

Aaron never once raised his voice.

Jane’s entire face darkened with embarrassment. Valen didn’t have to be in her head to know she was feeling it. Her expression and even the scent she was giving off proved it.

Valen focused on Makisa, however. “And you, Makisa. Are you gloating?”

Makisa had been. Even with her neck arched so that she was facing the ground, Valen had seen the plumping of her cheeks from a smile he suspected was quite a smug one. And, as with Jane, Valen could smell Makisa’s attitude.

“I suggest you reconsider,” Valen advised. “It’s not going to be easy for you to be so proud of yourself while you’re digging the new waste holes and covering the old ones.”

Makisa glanced up to about his knees. “But—”

“Do you really want to push me on this, Makisa?” Valen asked. “I made it very clear that everyone had to cover up their genitals around others unless we are preparing to take a run or they’re in a private area. Our two societies have to learn to get along.” Which was why he hadn’t made his fellow shifters cover their chests, male or female. He’d compromise, but the humans had to do the same.

Makisa was very lovely and well-formed, and she knew it. There was nothing wrong with being confident and proud of one’s body or face, but flaunting it just to cause trouble was unacceptable. Valen knew that was what Makisa had done. This wasn’t the first time, either. In the past three weeks, he’d had a half-dozen complaints about her refusing to cover up around others.

“If you can’t abide by the laws of the pack, you will leave,” Valen continued. “You know this is our way. There are other packs you might be happier joining.”

Makisa shook her head. “No, I don’t want to leave.”

“Then what’s the problem, Makisa?” he asked. She’d been a friend to him up until she’d discovered how to use sex as a weapon. It didn’t work with him, and Makisa had crossed him off her list of potential conquests and friends.

“The problem is them,” she said with vitriol. “Why should we have to change because they’re a bunch of prudish—”

“You don’t have to change,” Valen interrupted. “You can leave. That is all.” He wasn’t discussing that part any further with her. “Tomorrow you will be covering the old waste holes ten minutes after sunrise. Walter will be along to supervise with two other people who’ll be helping. Make certain you’re properly attired.”

“You’re dismissed.” He hated being so formal, but being a friend to someone who wasn’t showing respect for him could cause trouble in the pack, and besides, Makisa wasn’t his friend. Like some of the shifters, she needed a firm hand to guide her or she’d act out.

Valen looked at Jane. “We’ve made compromises, but we will not change our entire way of living. To expect that is ridiculous. If you’re comfortable wearing so much clothing, then continue to do so. If you’re envious of our females’ freedom, remember that it extends to you as well.”

Jane’s eyes rounded. “But we don’t do that!”

“Why not?” Valen asked. “What’s stopping you? Certainly not any laws here. Walter and Anita have agreed on everything in regards to the clothing. It doesn’t just apply to shifters. It’s for the entire pack. We are one pack, not two species coexisting for the hell of it. We joined together,” he re-emphasized. An idea began to form in his head. “Together—and maybe it’s time I make that crystal clear.”

While we get to see the romance between Rivvie and Matt take shape, we also get to see what Valen has to deal with as the pack Alpha. Ms. Bradford holds true to the ser...

Faced with one realistic calamity after another Valen’s Pack stands strong in Exodus.  Everything is thrown at the valiant pack, including a spicy romance between Rivvie and Ma...

Share what you thought about Exodus and earn reward points.