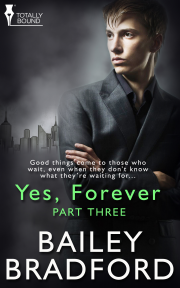 From zero to sixty in record time—well, it's really from no man to two in a matter of days, and it's got John's world turned upside down!

Confused and angry, John goes home after an odd encounter with an older man. He's pretty sure he didn't like it, exactly. Maybe. Benji seems to have moved on, and John knows he should too, but he can't stop thinking about the contradictory man.Finding another note from Benji doesn't help. John knows he's made mistakes, and he's learning that he has been lying to himself for years. Slowly, he realises there are things he has to admit, and change.First, though, he has to talk to Benji. John won't have any peace until he and Benji make some sort of peace. If his heart is telling him he truly wants something more, John doesn't see how that can work, not when Benji makes it clear he's interested, but only in a part of John.But John can't give up, something about Benji calls to him like no one else ever has.

I have to say, I was really happy that John and Benji were finally able to sit down and talk about what was going on between the two of them. That was so great for them to do it, they were able to...

In this third part of the story, Bailey Bradford has added another layer and more depth to her characters, as well as giving even more insight into the world lived by those with severe depression. Now...

Share what you thought about Yes, Forever: Part Three and earn reward points.