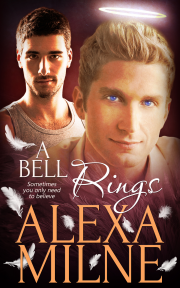 Sometimes you only need to believe.

Raziel Slade and Jack Hastings have been best friends since Raz saved Jack’s life twelve years ago. Only Jack doesn’t remember Raz at all and he certainly doesn’t remember falling in love with him. Now that Jack has moved in with his university housemates, explicit dreams begin of a blue-eyed male stranger. Needing a new flatmate after his best friend moves out, Jack is introduced to Raziel Slade who has extraordinary blue eyes. Jack has no idea how to cope with his attraction to the man.

Raziel Slade has a secret—he used to be an angel. He fell in love with Jack Hastings and happily became human, but the angels aren’t prepared to let him go, so they steal him back. All Raz wants to do is return to his lover any way he can.

When a film brings back Jack’s memories, will he feel the same as he did when he finds out what Raz gave up for him? And are the angels finally ready to let Raziel, the Keeper of Secrets, go?

Publisher's Note: This book is a sequel to Not Every Time.

Jack reached out and found nothing but space. Confused for a moment, he opened his eyes and stared at the emptiness on the other side of his king-size bed. Two thuds told him George and Fred had landed on the mattress. Seconds later, the meowing began, followed by four paws kneading his side, then George, as always, head-butting him. Before George could stick out a paw to swat his nose, Jack pulled himself into a sitting position and glanced at the clock—seven a.m.

From the noises they were making it obviously was. Jack swung his feet over and sat on the edge of his bed, rubbing his eyes. The cats swirled around his legs.

“All right, give me a few minutes and I’ll be with you. I have to pee and clean my teeth first.”

Jack staggered to the bathroom. He stared, bleary eyed, at the face in the mirror, which currently sported too much stubble. He’d shave later. His dark hair grew quickly, so he didn’t want a five o’clock shadow forming by the time he reached the restaurant. Whatever Kay said about beards being sexy, he liked to be clean-shaven, neat and tidy, just like his flat with everything in the right place. He splashed his face with cold water in the hope he’d feel more awake—he didn’t.

Still wearing his shorts and a T-shirt, Jack dragged himself through to the kitchen. The cats sat waiting next to their bowls, meowing as if they hadn’t eaten for days. He removed two pouches from the box and filled each bowl before topping up their biscuits and water. Next he sifted the litter tray.

“I don’t know how I cope with such a glamorous life. Next time I’m coming back as a spoiled cat.”

Tea made and cereal and milk poured, Jack opened his laptop to check the news. An hour or so later, his mobile rang—Kay.

A bell rings was a good read. I loved that Raz loved Jack so much he was willing to do whatever he had to in order to stay with him and I love that Jack loved him enough in return to let him go and s...

Share what you thought about A Bell Rings and earn reward points.