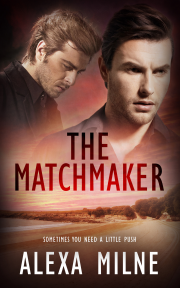 Sometimes you need a little push.

Josh is a carer and Simon is his employer. Each has a secret they keep from each other, but not from the other person in their lives.

Tom may only be a teenager, but he can see the attraction between his father and Josh. Can he bring them together and create a happy ever after for all three of them?

Josh pressed the first Velcro strap across to make sure Tom’s shoe was tight on his foot. Did I hear him correctly? “Sorry?” he said, still kneeling.

Josh’s heart leapt to his throat. What had Tom seen? He’d tried so hard to keep his feelings under control. He needed to shut this down. “Of course I like him, otherwise I wouldn’t put up living with the pair of you.” He stood. “There, that’s you ready for school. Let’s get this show on the road.”

Tom grinned at him, mischief filling the twelve-year-old’s expression. “I won’t give up, you know.” He moved the handle forward and maneuvered his wheelchair toward the door.

Still reeling, Josh grabbed Tom’s backpack and followed him. He opened the car, pulled out the ramp which allowed Tom to guide himself inside then secured the chair before getting into the driver’s seat. Perhaps Tom would give up if he said nothing to encourage him. Perhaps pigs might fly, too. After two years of working with Tom, Josh knew better. His cerebral palsy might cause physical problems, but he had a fiendishly clever mind. Josh pondered the situation as he drove. Should he simply give in and admit his feelings for Tom’s father, after all?

“Anything special going on at school today?” he asked, hoping to change the subject.

“Nah, just the usual. Me and Jake have our science project to finish, and we’re making volcanoes in geography. You remembered to pack my PE kit, didn’t you?”

“Of course. Do I ever forget anything?”

Tom could stand for short amounts of time. He’d worked hard with his physiotherapist and, with the help of his teaching assistant, Mr. Grant, he managed to do many more activities.

Josh sighed. “I can’t remember the last time I played cricket. I used to be a good bowler in my school days.”

“We could play in the back garden. The more practice I get, the better,” Tom said. “We’re still having pasta for dinner, aren’t we? You promised. Dad said he’ll be on time tonight, and you know how much he likes your lasagna. I’ll eat the salad, as well, I promise.”

“I said I would and I keep my promises.”

Share what you thought about The Matchmaker and earn reward points.