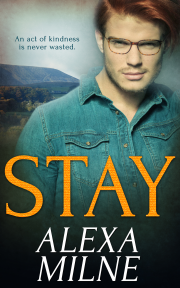 An act of kindness is never wasted.

Ben Harwood loves his grandmother. When he visits her in the hospital, another old lady, Ivy, expresses a longing for an orange, so Ben, who works in a supermarket, takes her oranges the next day.

Later, after attending his grandmother’s funeral, he discovers that Ivy has died too, and decides to pay his respects. There, he meets Ivy’s grandson, Martin Riley, and the attraction is instant. To his amazement, Ben finds he has become a bit of a hero to the Riley family, who have traveled over from America. For Martin, Ben breaks his three-date rule more than once. Is this simply a holiday romance with great sex, or can he and Martin build something more permanent?

Ivy sighed and gazed at him. She was a game old girl and in the small hospital because her husband had done in his back by lifting her onto their bed. “I’ve such a longing,” she said.

Could an eighty year old look coquettish? Ben smiled. “Oh yes,” he said, noting her twinkling eyes. He never knew what Ivy might say next. “Anything I can help with, Ivy?” He’d been visiting his grandmother in the ward for a few days now, and he’d gotten to know the other women, listening to their stories over tea and biscuits, but Ivy, whose closest relatives lived abroad, had gained a special place in his heart, even after such a short time.

“I’d really love something I haven’t had in years. I don’t even know if you can get them these days,” Ivy continued. “I’d love an orange—one of those big blood oranges—but with my poor hands, I can’t even peel them now. Oh well, I guess I’ll have to make do with juice.” She sighed again and bent over to suck her tea through a straw.

Ben didn’t say anything, but he knew he’d be able to get her some at his store. He turned to his gran who had fallen asleep in the chair next to his. She was in there for two weeks while his parents were away on a much-needed holiday in the winter sun of the Costa del Sol. The doctor had told his mother if she didn’t rest, she’d be in the hospital instead. His gran hadn’t been happy, but Ben had agreed to visit her every day, sometimes twice if he could fit it in with work. She was in her early eighties now and beginning to fade. Her life had been reduced to being in one room, mostly in bed, looked after by his mum. She wouldn’t have anyone else, and his mother would never consider putting her mother-in-law in a home. He touched her hand, not wanting to wake her, but he knew if he didn’t, she’d be annoyed with him for not saying goodbye properly. His gran was always a stickler for good manners.

She opened her eyes.

“Gran, I’ve got to go. I’m on late shift tonight. I’ll see you tomorrow, okay?” He kissed her forehead.

“You make sure you’re on time,” she said. Her voice had become rather quivery, but it still had a tone that showed she expected obedience.

Once outside, he clicked the car key, climbed in and drove to the store. Usually, he rode his bike to work in all weather, so having his parents’ car while they were away was a luxury. He pulled into a space in the staff car park then ambled into the supermarket where he’d worked since finishing university. He’d never been sure what he wanted to do, but he’d spent all his summer holidays working at this place, and they’d suggested he go into their management training program. He supposed some people might consider him a failure, but he’d never been ambitious and he liked living at home. This way, he had the friends he’d made at school, and the job gave him sufficient money to live on. It was enough.

He signed in then strolled through the aisles to the office complex at the back of the store. His current job in purchasing required complete and up-to-date knowledge of what was currently popular and what wasn’t, necessitating that he keep an eye on trends, anticipate them and react to them to insure they had all the things the consumer desired. Surprisingly, he enjoyed the work more than he’d expected.

For a short story this had everything I could have asked for, it was light, sexy, lustful and most of all sweet. I know a lot won’t like the insta love but I did, it fit the story beautifully. It's...

Sometimes a sweet story (with some hot sexy times) just hits the spot. This was one of those times. I have a soft spot for MC's who look after the elderly - I have an even softer spot for elderly chara...

Share what you thought about Stay and earn reward points.