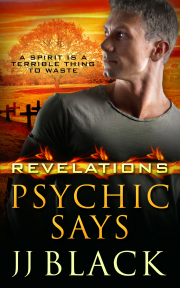 Fabulous intrigue that I never saw coming made this book even better than I had hoped. The smoking hot, sexy alpha, and he and Stephen's hijinks in between the sheets was definitely worth reading (twic...

Drama, danger, and sexual tension weave through Psychic Says.  This is an exciting blend of romance and mystery for the second installment in the Revelations series.  Medium Stephen has legiti...

I’ve always been an avid reader, bordering on obsessive. There’s nothing better than getting immersed in a book, losing yourself in the words and worlds the authors create. As the years went by, I started creating my own stories and characters in my head. I kept them to myself, until it got to the point that I had to get out on paper. Once I started writing them down, I couldn’t stop.