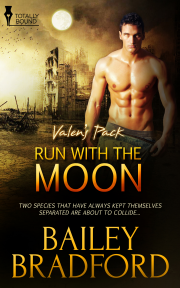 Run with the Moon

Very well written. I really enjoyed the entire book. The details were amazing. There was drama, adventure, and action all throughout. The intimate scenes between Aaron and Valen were hot and passionate. Absol...

Very well written. I really enjoyed the entire book. The details were amazing. There was drama, adventure, and action all throughout. The intimate scenes between Aaron and Valen were hot and passionate. Absol...

Share what you thought about Run with the Moon and earn reward points.

The older I get, the more I like myself. I’ve always believed that my life is a work in progress—I don’t apply my beliefs to everyone else. As such, I’ve worked hard on being someone I love instead of looking like someone who should be loved. What I mean by that is this: Society, Hollywood, the media, so many sources, they push these ideal women at us. They are thin and flawless, and that’s supposed to be what we look toward being ourselves.