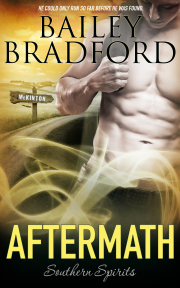 Book 5 in the Southern Spirits series

Darren Brown spent two years running from his past, but he could only run so far before he was found.

Darren Brown lost the only two people he loved just days apart. His mother first, then his best friend. Guilt over his friend's death drives Darren to wander for over a year before he winds up in the town of McKinton, Texas.

Lee Bausch served his tour in the Army then started his quest to find answers only one person could give him—except that one person had moved away. It takes him almost two years to find Darren Brown, and it turns out Darren doesn't have the answers Lee needs—he is what Lee needs. Darren is shy and so sexy Lee can't get enough of him, but he still needs answers because he can't shake the feeling someone he loved was murdered.

After a terrifying experience at the motel, Darren knows he has to tell Lee about the spirits in McKinton. And there's one spirit, scared and alone, who has the answers Lee seeks, if only the spirit knew how to tell Lee his suspicions are right.

Reader Advisory: This book is best read in sequence as part of a series but can be read as a stand-alone title.

Darren Brown eyed Red, the Rhode Island Red rooster, cautiously, watching for any signs of agitation from the bird. Generally he didn’t have any problems when it was time to feed the critters and gather eggs, but every now and then that red rooster got his feathers ruffled and decided Darren looked like a walking whipping post. The rooster tipped its head to the side and clucked. It was the sign Darren had been waiting for. He wouldn’t have to toss the food from the bucket and run for cover this morning.

A ripple of unease clambered down Darren’s spine as he stepped off the front porch of old Widow Hawkins’ place. Virginia, the café owner, and Deputy Nixon, along with Nixon’s life partner, Carlin, had bought the place with the intention of turning it into a hang-out for the elderly. There’d been talk of Darren staying on once the conversion was done, kind of like a groundskeeper or something, Darren wasn’t sure. The talk never went far since Darren didn’t do much to encourage it. He didn’t know how long he was going to be in town and hated the idea of letting anyone down if he left. As it was, Virginia and the others had agreed to let Darren stay here as long as he kept the place up—and took care of the chickens, a job that had, up until Darren moved in a couple of months ago, belonged to Deputy Nixon.

Darren glanced around as the uncomfortable feeling increased. He knew that sensation, the one that made the hairs on the back of his neck stand up. It was the one that told him someone was watching him, and his heartbeat accelerated until he thought he might burst an artery. But as hard as he looked, he couldn’t find anything suspicious. Nothing was out of place, and there was no one here but him and the chickens. He’d heard rumors of ghosts—spirits, Severo insisted they be called, and didn’t that little guy creep Darren out? Those pale eyes seemed to drill right into Darren, so he did his best to avoid meeting them.

Still, despite the talk, Darren didn’t worry about such things as lingering spirits. People just stopped when they died. He knew that, believed it if he didn’t believe anything else. One second they were there, laughing, loving you, then they weren’t, and everything about them vanished except what you carried in your memory. Even if you wished you didn’t carry anything of them at all.

Darren shook off the paranoia that threatened to swamp him. No one was here besides him. He hefted the bucket of chicken feed and waved it at Red. “You looking for this?” Darren flinched. The sound of his own voice only seemed to emphasize how alone he was, yet he couldn’t shake the idea that he was being watched.

The rooster clucked and flapped its wings. Darren shoved aside his discomfort and reached into the bucket for a handful of feed. He tossed the mixture on the ground and waited. Sure enough, Red gave him a haughty look, or as haughty a look as a chicken could give, then strutted to the feed and began pecking at it. Soon the hens joined the rooster, fussing and clucking as Darren spread the food around.

“Be nice,” he scolded when a few of them got agitated. “There’s plenty to go around.” Darren edged around the chickens and went into the coop, gathering eggs and placing them in the bucket. When he thought he had them all, he left the coop and headed back to the house. He’d put the eggs in used egg cartons and take them to Virginia, the owner of Virginia’s Café and his boss, who liked to use them while they were nice and fresh.

Since it was Sunday and the café wasn’t opening until eight a.m. instead of the usual five a.m., Darren had plenty of time to get to work and deliver the eggs. Used to waking at four or earlier, he’d found himself wide awake and bored out of his mind by four-thirty. He’d tossed and turned and even beat off, but had finally given up on sleeping in and got up at five-thirty. Now it was a little after six and he figured there was no reason to hang around any longer. Virginia would already be at the café, and he could go in early. She wouldn’t mind.

Darren loped up the porch steps and that creepy feeling ramped up in intensity until he couldn’t draw a breath. Hand tightening on the handle of the bucket, he pivoted slowly and scoured the area. Nothing. No one. It looked as it had every day so far. Darren inhaled and forced air into his lungs then shuffled to the front door. He hadn’t got more than three steps inside before he heard the pop of the screen door at the back of the house slapping shut.

The bucket of eggs slipped from his suddenly lax fingers. Fear flashed through him, settling in his joints, turning them to gel so that Darren’s knees buckled and hit the floor. Fragile shells cracked under his weight, warm wet yolk and albumin seeping through his denim jeans.

Dizzy with the intensity of his fear, Darren caught himself as he fell forward. His hands slipped in the mess he made, undermining his efforts to keep himself from going down. Darren’s chin cracked sickeningly against the floor but he didn’t notice it or feel the pain. All he could hear was the voice in his head telling him he’d been found and begging him not to run again.

Laughter and emotionally gripping turmoil flows from the pages as Conner helps a young spirit adjust to his surroundings and gets Lee and Darren's attention with quite a few hijinks, while the chemi...

Aftermath is yet another wonderful instalment in the Southern Spirits series Bailey Bradford. If you haven’t started the series, you should! *I received an ARC through Love Bytes Reviews for a fai...

Share what you thought about Aftermath and earn reward points.