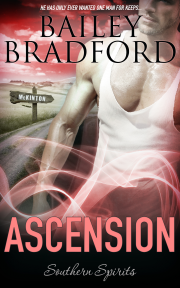 Book 7 in the Southern Spirits series

Conner Sutherland has been alone for a long time. He can't remember the last time he even felt the desire to be touched by another man. Sometime before his death, when he'd still been Laine's lover. But Laine had found Severo years ago, and if any two people were meant for each other it was Laine and Sev. Where that leaves Conner, he doesn't know, other than feeling lost and out of sorts.

He doesn't want to think about the way he feels when he sees Ro—Rogelio, Sev's nephew. Conner's seen Ro grow from pretty boy into a handsome man, but wanting him is foolish and useless. Ro's got a life to live, and even if he does things that hurt Conner, that's not Ro's fault. He doesn't know he entranced Conner long ago.

Ro has only ever wanted one man for keeps. It's a pointless want, though, because Conner Sutherland is dead and too busy pranking Laine and Sev to notice Ro anyway.

But life, and death, have a way of surprising you, as Ro and Conner find out.

Reader Advisory: This book is part of a series and is best read in order.

Publisher's Note: This book was previously released by Totally Bound Publishing under the same title. It has been expanded, revised and re-edited for re-release.

"Hey, Ro, can you get the oven mitts for me?" Severo asked as he opened the oven door.

Rogelio Martinez plucked the mitts from the counter top and handed them to his uncle Sev. The heat from the oven wafted out and Ro stepped back, swiping at his brow. "Are they ready?"

"I think so." Sev pulled out the bubbling enchiladas. The spicy scent of them filled the kitchen and Ro’s stomach gurgled with anticipation. Between the enchiladas and the tortillas, both homemade, he was about to drown himself in drool. He swallowed and greeted his uncle Laine as he came into the kitchen. "Hey, Uncle Laine, how was work?"

Laine took off his Stetson and held it in one hand as he walked over to Sev. The kiss they shared was brief but the love between the two men was evident in the way they leaned towards each other, and in their expressions.

Rogelio’s heart pinched with something uncomfortably like jealousy. He didn’t want to be ugly, and he didn’t begrudge his uncles their love. He just… He wanted a love like that for himself. Well, and another man, duh. As he watched Sev and Laine, Ro’s mind wandered to his fantasy man. Ro had pictured him so many times since he’d realised he was gay. Thick blond hair, stocky, muscular build, and a smile that promised all kinds of mischief.

Ro blinked and shook his head. The image forming in his mind wasn’t one of a man he’d ever had. It was of a picture he’d seen years ago when, as a teen, he’d gone snooping into Sev’s past. It had twined with Laine’s, and Ro had been a naïve and romantic young fool, so entranced by Sev and Laine’s love story that he hadn’t been able to think of much else.

Laine’s deep rumbling voice snapped Ro out of his thoughts. "Yeah, sure."

Ro took the plain blue plates down from the shelf and placed them on the table. It didn’t take him long to lay out silverware and glasses of sweet tea. Laine made up a batch of guacamole while Sev finished up the salsa. They sat down at the table once everything was in place.

Laine arched a brow at him and pointed at the enchiladas. "Two or three?"

"Three." Ro was thin as a whip but he could and did eat anything he wanted.

Sev sniffed at him. "I used to have that kind of metabolism. It’ll catch up to you, trust me."

"I doubt that," Ro said as he scooped some guacamole onto his plate. He was starving, but he could spare a moment to pick on his uncle. "You’re still in shape, and you’re getting old."

Sev hissed and kicked him under the table. "I am not old, smart ass. And Laine’s older than me, anyway!"

Ro nodded and managed not to grimace as his shin took another kick. "Yeah, but Laine has always looked…" Ro waited for Laine to glare at him, then he sent Laine his sweetest smile. "Dignified."

Laine snorted and muttered, "Dignified, my ass. Sayin’ I always looked old is what you’re sayin’."

Ro hitched up a shoulder and shovelled a forkful of enchiladas into his mouth. He closed his eyes and moaned appreciatively as the hot cheese almost burnt his tongue. He wasn’t the only one enjoying the meal, either. The three men quit picking on each other and settled in to eat.

A prickling sensation caused the hairs on the back of Ro’s neck to stand up. His skin flushed with an awareness that he’d come to recognise. Sev cocked his head, but Laine kept eating, right up until the time that his plate scooted away from him.

Laine grabbed his plate and glared around the room. "Aw, damn it, Conner! You’re just jealous because you can’t have any!"

Sev shook his head. "He can have yours," he said just as Laine’s plate was lifted off the table.

Laine leapt up from his seat but the plate spun up until its contents almost touched the ceiling.

Ro’s pulse raced and he grew warm in places he just shouldn’t while sitting at his uncles’ table. Ro set his fork down and pressed his hands to his thighs, digging his fingertips hard against his legs to distract himself from the wave of arousal washing over him. Only someone like him would have a crush on a dead guy with a love for pranks.

I really liked how Bailey wrote how the spirits interacted with one another and humans. Chocked full of surprises and emotional situations this book draws the reade...

A roller coaster of emotions bombards readers as they get caught up in this gripping romance and a sense of wonder catches the reader by surprise when life works out for these two strong, compelling chara...

Share what you thought about Ascension and earn reward points.