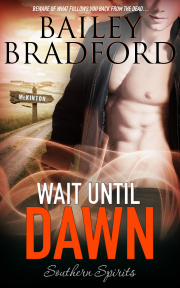 Book 4 in the Southern Spirits series

Beware of what follows you back from the dead…

Detective Rich Montoya was attacked by Sheriff Stenley's stalker in When the Dead Speak. A year later, Rich is having a rough time, haunted by a malevolent spirit that's making his already fragile existence hellacious.

Rich, who's kept to himself for the past year, is scarred more than physically. The last thing he thinks he needs is a lover, little does he know…Chris Neeland is a big guy who drives a big rig, and all it takes is one look at the sexy, wounded man driving the cute little Miata and Chris is sunk. His mystical mother always told him love would hit Chris like a bolt of lightning, fast and hard and not without pain, but he kind of hadn't believed her until he meets Rich.

Reader Advisory: This book is part of a series but may be read as a stand-alone title.

So much anger. Rich Montoya squeezed his eyes tightly shut as the nerve endings in his fingers and toes burned, sending pin pricks of pain up his limbs. He tried to will back the evil he felt roiling inside him, but as had happened every time before, it hammered away at his control until bright spots danced behind his closed lids and the foreign presence that haunted him wreaked havoc on his body and mind. It exploded inside him like a geyser, pressurised hatred shooting up and spewing throughout him, splattering his soul with inky black streaks of the malevolent being that tormented him.

Rich grunted as he fought the crushing waves of fury, the twisted desires and memories that were forced into his mind. Images of mutilated bodies, his own and another man, seared into his memory. A whimper slipped free as Rich pressed the heels of his hands to his temples, trying to push out the hated invader If he could pop his head right open and put an end to this now, he’d do it.

Screams of pain, dark eyes filled with horror, the sadistic glee as the invader forced helpless victims to bear the brunt of his twisted games. Rapist, victim, murderer, victim—Rich was shunted back and forth, experiencing each. His own shouts mixed with the ones shared by the invader, filling Rich inside and out with sounds of terror and denial. Rich’s body jerked at the vision of a brutal penetration, agony ripping through him as if he were being torn into with the force of a jackhammer. His back bowed as he cried out, his hands alternately pulling at his hair and pounding at his head.

“S-stop it! Jesus, God, oh fuck, help me…” Rich pleaded, knowing it was useless. His fears and begging only ever spurred the invader on. Curling into a foetal position, Rich trembled, his teeth chattering as he was mentally subjected to more atrocities. He couldn’t do this, couldn’t experience this again and again and stay sane. And if he didn’t keep his sanity, then the invader would win, maybe even take Rich over and have a willing body in which to act out the sick desires.

“No,” Rich whispered, then yelled as his own fury erupted, “No! You won’t win!” He rolled off the bed and hit the tiled floor with a loud smack. The pain of the fall helped centre him, giving him something physical to focus on when his mind was in such turmoil. Pushing himself up to his knees, Rich pried his eyes open, unsurprised to find himself shrouded in darkness. The invader always came in the early morning hours—the witching hours, Rich’s grandma would have said.

On the nights the invader didn’t come, Rich was always wide awake, unable to sleep for fear of having his mind hijacked and filled with horrors no one should ever have to see or experience. He’d wait until dawn, then try to catch a few hours’ sleep. It was a pattern that drained him of his energy—and his will to live. What was the point of living if he no longer had a life of his own?

Even without the presence that insisted on shredding Rich’s mind, his nights were filled with his own memories of pain and fear, the glint of light off a sharp-edged knife, the searing fiery agony as it sliced into his skin over and over again. His skin was striped with his experience at the hands of a mad man, lines smooth and jagged etched forever into his flesh. He’d never forget, never have peace, never be who and what he was before.

Another wave of images streamed through his head, more screams and agony, more sick delight from the one inflicting the torture.

“No more, you fucking evil bastard,” Rich muttered. He grabbed the nightstand with one hand to steady himself and pulled the top drawer open with his other. Even in the darkened room, a sliver of moonlight slipped through the curtains and caressed the cold steel, giving off a subtle glow that seemed to promise salvation, if not respite. Rich picked up the gun, his hand steady despite the rapid beat of his heart. He’d had enough, couldn’t deal with it any more. If he went to Hell, it couldn’t be any worse. He wasn’t sure he’d want to go to Heaven anyway, if such a place existed, not if God was real and let shit like this happen to people.

Flick-flick-flick. Images skipped and sputtered like a film reel misaligned in its projector. Memories or fantasies that weren’t his own, would never be his no matter how deeply branded into his mind they were, faded in and out.

“Enough,” Rich rasped, flinching only a little when he pressed the barrel under his chin. It wasn’t fear of death that made him twitch, only the shock of how very cold the steel felt against his skin. Rich closed his eyes and took a deep breath, already feeling a sense of peace at having found a way to escape. He slipped the safety off and tucked his finger against the trigger before remembering that finger wouldn’t work. He shifted his hand a bit until his middle finger touched the trigger.

Bradford does a good job bringing light to the story to help set off all the darkness. Of course there’s also several incredibly sexy scenes between Chris and Rich that will leave you breathing hard....

Rich and Chris's story is one that had me holding my breath with anticipation of a well-deserved HEA and there was no way that I could put it down once I started reading it. Note: These books can b...

Share what you thought about Wait Until Dawn and earn reward points.