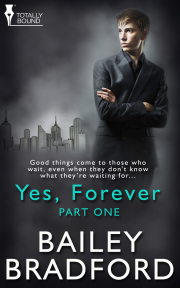 Just when John Weston thinks he's got it all together, he learns he's really just buried his head in the sand.

John Weston has been using his past behaviour as a weapon against himself. He's not wanted to fall back into old habits and ways that nearly destroyed him. That's why he's kept to himself for the past two years.Little by little, things happen that begin to make him see what he's really done—wall himself off in such a way that he no longer knows how to be around people outside of his job and his family.One man will come along and rattle John's self-imposed cage, and start John on a journey of self-discovery and acceptance he didn't even know he needed. John will have to take risks instead of hide away, and learn that making mistakes doesn't mean he's a lost cause. It simply means he's a man who can feel more than he'd ever thought he could.

John gave him his full attention and Benji continued.

“I do tend to over step, and I’m pushy and loud and obnoxious,” Benji rushed out. “And it’s worse when I’ve had a few drinks, so maybe it’s best that you didn’t have any beer, really. I am sorry for being an asshole Sunday.” Benji hitched one shoulder. “I do think you’re pretty hot in this controlled, I don’t make mistakes sort of way. Don’t know that I could handle it in a relationship, but maybe we could get off together?”

It was on the tip of John’s tongue to point out he hadn’t mentioned being interested in a relationship with Benji, but he refrained. Partially because he didn’t want to argue with the guy, and he figured that was what would happen if he did speak up. Benji’s apology seemed sincere enough, but John noticed he didn’t seem to be a whole lot different sober than he was drunk, if that’s what Benji had been on Sunday. There was still an almost confrontational air about Benji.

“It’s okay. I could have handled things better myself,” John finally said. Benji seemed to relax, that combative part of him vanishing, at least in John’s opinion. “Here, have some.” He set half of the sopapillas on Benji’s plate. Benji opened the small containers that held the Dulce de Leche and honey. John hoped he wouldn’t bring up the part about them getting off together, because his dick had perked up when Benji had mentioned it.

What would it be like to fuck that sweet ass? No, he didn’t need to know the answer to that. Didn’t need to, but he wanted to.

Benji dipped a sopapilla into the creamy sauce and moaned when he took a bite of it. “Oh my God, so good,” Benji said around a mouthful of the treat. He closed his eyes and moaned again. There was a dab of the sauce on his lip, and it took all of John’s self-control not to lean over and lick it off. He almost whimpered when Benji licked it clean.

Benji opened his eyes just a little and looked at John. “So what do you say about getting off together? No strings, nothing but feeling good and coming until we can’t move?” He leant forward and put a hand on John’s arm, squeezing the muscles there. “I know you stared at my ass when I was going up the stairs, that’s why I wanted to go first. I could feel you watching me.”

Would it really hurt anything? John was so hard his gut was aching. It’d been over two years since anyone other than himself had touched him in more than a friendly or familial manner.

“It’s okay to say no.” Benji stood and jutted his hips, the swell of his cock beneath his tight jeans unmissable. “But I don’t think you want to say no. I think you want me to get on my knees and suck you until you come. That’s okay, I want that, too. You don’t even have to suck me back.”

“Oh, God,” John rasped, his sopapillas forgotten as he imagined Benji kneeling and blowing him. “Yes, please,” he got out before his brain could decide anything for him.

Benji bent and brushed a sloppy, wet kiss over his lips, then he was crawling under the table. John scooted his chair back enough to give Benji some room. His hands shook and his chest was so tight with nerves he could hardly breathe as Benji got between his knees.

“Lift your butt up for me,” Benji whispered, his eyes piercing John’s with a hot look before he glanced away.

John was so tangled up in his body’s need that he couldn’t do anything but what Benji told him to. He canted his hips and Benji reached for his belt. In seconds, Benji had John’s cock and balls freed.

“Nice,” Benji murmured, stroking his length slowly. “Thick. I bet this would feel so good in my ass.” He flicked a glance up at John then went back to watching his hands. “It’s going to stretch my mouth, make me ache. I don’t know if I can take it into my throat—”

John moaned then, and closed his eyes. He was going to come and embarrass the heck out of himself if Benji kept it up. The touching alone was pushing him to the edge, but add in the talking, and he was in real danger of shooting off already.

John swallowed his pride as he gripped the sides of his chair. “Please,” he begged. “Please, suck me.”

As a complete fan of Bailey's work, when this first came out, I couldn't wait to grab my copy of it!! Yes, the story is short, but it is a great start to a mini-series and I personally cannot wait...

John has been working to get himself together and to handle his depression without making poor choices. But other than his friendship with one friend and his family he really has no social life. An...

Share what you thought about Yes, Forever: Part One and earn reward points.