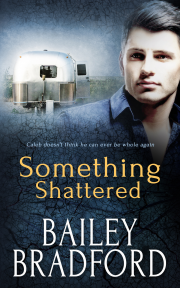 When something inside him is shattered by an act of violence, Caleb Tomas doesn’t think he can ever be whole again.

Police Officer Jesse Martin has lived in the small town of El Jardin, New Mexico, for a decade, but he’s never seen anything like the mysterious man who moves in in the middle of the night. The house across the street from Jesse’s trailer is no longer empty. There’s a puzzle waiting to be solved there in the form of one sexy, but decidedly different, man.

Bruised and battered inside and out, Caleb Tomas flees to the town of El Jardin in the hopes of escaping the terror that haunts him. Instead, he becomes more of a recluse, scared of everything, unable to get more than a dozen feet past his porch before he panics. His head’s a mess, and he knows he needs help, but that’s a step he doesn’t want to take. It’s easier, safer to stay hidden away with only his adorable puppy, Loopy, and the bird-murdering cat, Mix, for companionship.

But Caleb can’t help but notice the sexy man across the street, and when Loopy escapes from the back yard, it’s Jesse Martin who comes to the rescue.

And he might save more than one bouncy little poodle, if Caleb and Jesse are willing to take the risk.

Publisher's Note: This book was previously released elsewhere. It has been revised and re-edited for re-release with Pride Publishing.

Jesse Martin sat on the porch steps of his rented trailer, looking at the sparse patches of grass in his tiny yard. The New Mexico sun was bright in the clear blue sky, the heat beyond oppressive and bordering on hellish.

The beer bottle in his hand was sweating almost as much as he was, and he wondered if the yellowish-brown color of the grass meant it was dead or just severely dehydrated. Maybe if he watered the grass, it would eventually become a lush green carpet like his neighbor’s. That was one pretty lawn across the street.

Right. Like he would remember to water the pathetic splotch that was his yard—and he sure didn’t want to know what that would do to his water bill. If the landlady didn’t like the crappy lawn, then she could foot the bill and take care of the stuff. At least this way he didn’t have to mow.

Still, he couldn’t help but be a little envious of that thick, green grass across the street. The neighbor must be some kind of plant-life miracle worker. Even the man’s back yard was flourishing. It was possible that he had an in-ground sprinkler system or something, which was well beyond Jesse’s means.

Jesse took a drink of his warm beer. Still nasty. If he were smart, he’d sit out here with a little ice chest, though even then he’d have to really chug the beer to get it down before the temperature did a number on it.

Glancing at his watch, he saw it was five till three. He turned his attention to the house across the street. From behind darkly tinted sunglasses, he watched, waiting for the door to that home to open. A ripple of anticipation went through him.

Sure enough, as had happened Monday through Saturday every afternoon for the past month, the door slowly opened.

Jesse’s anticipation doubled. He tensed, waiting for what would happen next. When he saw it, he slumped with relief. Nothing had changed today.

One thin arm slipped out of the opened door, inch by inch.

Then, Jesse’s heart did its usual odd skippy-thing that happened every time he watched.

A man appeared, cautiously moving through the doorway. Beat-up tennis shoes, baggy denim jeans, a ratty T-shirt about two sizes too big for his frame, a cast on his lower right arm that had gotten dingier since Jesse had first seen it. Everything the neighbor had on was pretty much the same outfit Jesse had seen before. Whether this was due to the guy having a bunch of the same shirts, bad hygiene, or a limited wardrobe, Jesse hadn’t a clue. It wasn’t like he could just ask either—they weren’t exactly on speaking terms.

After only a few seconds’ hesitation, the man moved through the doorway and stepped onto the little cement porch. Jesse checked him out as inconspicuously as possible. Not quite short, and thin to the point of gauntness, the man was a mystery to everyone in the small town of El Jardin. Tongues were wagging, and gossip spreading. Some of the stories people told were unbelievable and, to Jesse, solid proof that the creators of those tales had too much time on their hands.

Besides, he remembered very clearly what it was like to be the new kid in town, even though ten years had passed. Jesse still wasn’t completely accepted by all the natives. More than a few of them talked about him, but he ignored them. For some reason, that was harder to do when the gossiping was about his new neighbor. Even his coworker, Officer Pat Monroe, made remarks here and there. But that didn’t surprise Jesse. Monroe was an asshole who never missed an opportunity to make snide remarks. Some days it seemed Monroe spent more time talking trash than performing his duties as a police officer.

Jesse tried not to give such talk any credence, with the exception of ensuring there wasn’t some pervert living across the street. No, he’d rather get the truth from the source, but that was kind of hard to do when the source wasn’t talking.

Granted, Jesse hadn’t tried too hard, just knocked on the door the day after the guy had moved in. When his knock had gone unanswered, he’d figured his new neighbor was either asleep or maybe at a doctor’s appointment, considering all the injuries he’d had. Jesse had walked back to his trailer and gotten ready for work. Right before getting in his car to leave, he’d glanced across and noticed that a printed sign now graced the door. Curious, Jesse had walked to the sidewalk, squinting in an attempt to read it.

DO NOT DISTURB THE TENANT.

Well. That had seemed pretty clear. Jesse hadn’t been offended by the snotty sign at the time. Easy enough to understand, since the man was so banged up. Except, over a month later, the sign was still up. Pretty clear, but not so understandable. Now the sign just seemed rude.

Jesse took another drink of his beer, grimacing as the heated liquid hit his tongue. The neighbor was at the mailbox now. Well, not exactly at the mailbox—that would mean he had to step off the sidewalk and into the street. Instead, as was the norm on these little treks, he kept his feet firmly planted on the edge of the walkway while he leaned forward and stretched out his left hand to retrieve the mail. Probably not uncomfortable, Jesse mused, but still, why not just take the few extra steps to actually walk to the mailbox?

The man slapped the box lid shut and pivoted carefully. Jesse quit trying to pretend he wasn’t watching and tipped his glasses down. Without the dark tint impeding his vision, he was treated to a brilliant display of gorgeous, curly auburn hair. The sun brought out streaks of red as well as glints of gold and orange in the silky-looking mess. Jesse’s fingers tightened on the beer bottle—the urge to touch the colorful curls was nearly a physical thing.

He sat on the steps for several minutes after the neighbor had disappeared back inside, wondering how pathetic he’d become when this was the highlight of his day.

Caleb took a deep breath and steeled himself. He could do this, he could. It was a pretty sorry thing when a grown man had to work to find the courage to walk fifteen feet to his own mailbox. Some days it took longer than others to even open the door.

Maybe that cop will be sitting on his steps. He’d seen the man numerous times—there were times it made his trip outside easier, knowing there was a police officer just a few feet away. Sometimes it made him nervous, though, because Caleb was pretty sure the guy was watching him. Maybe it was all innocuous, or maybe the cop was watching him for other reasons. Did he think Caleb was a criminal, some kind of threat to the people in this town?

Caleb actually snorted at the idea as he made himself unlock the deadbolts then slip on the glasses. His fingers shook as he reached for the doorknob, but he managed to turn it with a slight twist of the wrist. Caleb gingerly opened the door, fighting to keep his muscles from trembling. A deep breath, then another, and he was able to take the step that brought him outside and onto his porch.

I can do this. Keeping his head down, Caleb willed his feet to move. Slowly, he shuffled down the sidewalk. The sun’s heat seemed to seep inside him, warming the dark, frightened places in his mind. Caleb tipped his head up just enough to see the man sitting on his porch. He looked big and fit, a tight T-shirt clinging to sculpted muscles. Safe. I’m safe as long as he’s out here too.

Something Shattered by Bailey Bradford is an emotionally charged read that I could not put down. I loved how Ms. Bradford makes me really feel connected, and in love w...

I really loved the way this author handled this story and the way she wrote these two characters!
You do get your angst with this book and steam between these two men too! Read more reviews

Share what you thought about Something Shattered and earn reward points.