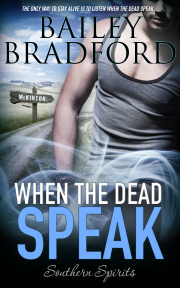 When the Dead Speak

Book 2 in the Southern Spirits series

Sheriff Laine Stenley thinks he might just be losing his mind. Ever since he'd encountered the spirit of his friend's deceased mother, strange things have been happening. His sheriff's tin star keeps popping off, his Stetson tends to fly off his head at the most inconvenient times—and then there are the subtle caresses that remind him of a lover's touch… Something Laine has been without for years—since the violent murder of his partner—and figures to be without well into the future if he wants to retain his position as the sheriff in the small town of McKinton, Texas. Laine doesn't want to risk his career or his heart ever again, but he may not have a choice, not if he wants to stay alive.

A man who listens to spirits, Severo has come to McKinton to deliver a message of danger. One look at the sexy sheriff and Severo finds himself in a different sort of danger. He's not ready to find a man who can claim him heart, soul, and body, but ready or not, the attraction that simmers between them is undeniable—and irresistible.

Together, they will race against time, because something evil is coming to McKinton. Severo and Laine must learn to trust each other—and themselves— and listen when the dead speak.

“I’m losing my God damned mind.” Sheriff Laine Stenley ran his fingers through his hair, tugging at the dark strands until his scalp tingled with pain. A frustrated sigh slipped from his lips as he stared at the spinning tin star that denoted his position of sheriff, lying on the sidewalk because it had once again popped off. He released the grip on his hair and slapped the Stetson back on his head. Laine bent and picked up the star, grumbling as he pinned it back on, again. If he had one more run in with the dead, he might just pop an artery.

The voice came from behind him and nearly gave Laine a heart attack. That would be one way to be done with this mess. He managed not to jump—barely—but he just knew the man behind him had to be able to hear his heart slamming against his ribs. And it is all that particular man’s fault!

Laine turned slowly and glared at Ezekiel Mathers. If Mathers hadn’t unwittingly given Laine his introduction into the paranormal… But that wasn’t fair, and Laine knew it. It wasn’t Zeke’s fault his mama had decided to…hang around, so to speak, after she died. Not really.

Zeke’s lips were tipped up in a smirk, and that just made Laine scowl even more. Beside Zeke, Brendon was giving Laine a scowl of his own. Brendon’s soft brown eyes were usually alight with laughter, and a softer emotion would gleam in them when he looked at his lover. The man was easygoing and kind, for the most part, but he never hesitated to call Laine—

“Don’t be a dumbass, Laine.” Brendon rolled his eyes and bumped his shoulder against his lover’s. “Zeke didn’t mean to startle you. It isn’t his fault you were daydreaming and didn’t hear us walking up behind you.”

Zeke’s lips spread into a shit-eating grin and he arched one brow at Laine. Laine pushed down the urge to snarl at the man; he was pretty sure that’s what Zeke wanted. Not that he and Zeke hated each other or anything. They just had a competitive friendship…that often seemed to border on combative. Laine wasn’t in the mood to trade insults today, though, so he just shook his head and glanced away from the teasing he saw in Zeke’s green eyes. He felt too old, too worn out and aching inside, to play their usual games right now.

“Morning.” Laine mumbled it, not looking at Zeke or Brendon as he stepped into the street to walk around them. He might be screwed up in the head, but he still was aware of the fact that Zeke was recovering from an attempt on his life. The cane the man had to use was another weight on Laine’s shoulders, a reminder that Laine hadn’t acted quick enough, hadn’t been smart enough, to keep Zeke safe. It was a burden Laine felt shoving him down beneath the surface every time he tried to catch his breath.

As he walked back towards his office, Laine couldn’t help but wonder how much more he could take before he broke. God willing, he wouldn’t ever get an answer to that.

Brendon watched the sheriff walk off, studying the defeated droop of his shoulders. Laine might seem fine to everyone else, but there were little tells, small nuances that one had to know to look for. Beside him, a low growl slipped from Zeke’s lips. Brendon, turned on and irritated at the same time, started to set his lover straight but stopped when he saw the teasing grin on Zeke’s face. He wasn’t quite able to bring himself to smile back, instead darting another worried glance at Laine’s retreating figure.

“Something’s wrong with him.” Brendon pushed at the small of Zeke’s back.

“I’ve been saying that since we met him, babe, but you refused to see it.” Zeke tossed in a look that all but said ‘Duh!’

Brendon fought against a smile; he was not going to encourage Zeke. Not for this, anyway. He applied a little more pressure to Zeke’s back and looked up at him through his lashes. Sometimes that worked. “Go talk to him, please?”

Zeke snorted and shook his head. “I know that look, and I don’t want to go talk to Stenley. What the hell am I gonna say to him? Let’s have an Oprah moment?”

Brendon tried to cover his chuckle with a cough, not that he thought his lover was buying it. Time to try a different tack. “Then I guess I can go talk to him and you can hang around at the cafe or something so he doesn’t feel like we’re ganging up on him. Hopefully, it won’t take long.”

When the Dead Speak has some delightful highs and bitter lows. It’s a well written book that I enjoyed reading. I love that the message of friendship and acceptance that was part of A Subtle...

This story has a good plot; the paranormal element gives it even more appeal. It was wonderful to see Brenden and Zeke from the first book again. They will probably always be my favorite couple of th...

Share what you thought about When the Dead Speak and earn reward points.