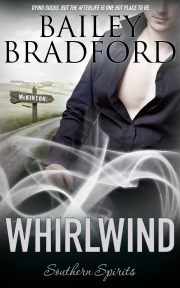 Book 8 in the Southern Spirits series

Dying sucks, but the afterlife is one hot place to be.

Stefan wasn’t physically perfect in life, and his search for someone to love him resulted in his murder. Now he’s been dead for years, and he’s lonelier than he ever was when he was alive. His physical problems might have vanished when his body ceased to live, but his spirit has to deal with the memories of the past.

Jordan and Gideon are friends who share eager guys when they can find them, but being in a war zone hasn’t allowed for that to happen often. One roadside stop puts an end to their lives. Jordan and Gideon are at a loss to understand what happens to them, why they stay behind when others go up into the light. Searching for answers, they head to Jordan’s hometown—McKinton, Texas—but a hell of a lot of things have changed in the decade and a half since Jordan left.

Namely, the arrival of one wicked, joyful spirit named Stefan.

Publisher's Note: This book has previously been released by Totally Bound Publishing. It has been expanded, revised and re-edited for re-release.

Ro looked horrified for a moment, his eyebrows scrunching together as he gawked at Stefan. “Why would I want to do that? I hated football when I was alive, and what would we use for a ball?”

“A ball,” Stefan said blandly. “Don’t tell me you haven’t learnt how to pick things up yet. You’re with Conner. You’d have to know how to grab corporeal things just to keep up with him.”

Ro scowled. “That still doesn’t answer the why part.”

“Because,” Stefan said as he waggled his eyebrows, “think of the way everyone at the park would freak out if they saw a ball shooting back and forth through the air.” It’d be hilarious…maybe. Or maybe not, since a lot of the townsfolk believe in spirits—ghosts. Stefan wasn’t interested in being exorcised. Again.

“Sounds like a great way to freak out someone and end up cast out of this world and into whatever comes next,” Ro muttered, crossing his arms over his chest. “Didn’t something like that happen before?”

How did Ro know what he’d been thinking? Stefan rolled his eyes. “Yeah, yeah, and it sucked. It was your grandparents who did it, wasn’t it?”

“I don’t want to talk about them.” Ro glanced around. “You know I still fear that they’re gonna pop up just to try to ruin my afterlife.”

“Conner would handle them,” Stefan informed his friend. Ro had to know that. Conner would never let anyone hurt Ro.

Ro flipped his long black hair. “Sure he would, but I don’t want him to have to. Anyway, I’m pretty sure they would hang around the other part of the family, not the heathen gay side.”

“Maybe.” But sometimes Stefan got so bored he wished someone jerkish would show up. All the spirits he knew were nice—and either straight or hooked up, like Conner and Ro.

“We could go see what’s happening at Sev and Laine’s place,” Ro offered, a hopeful light springing up in his eyes. “Conner’s off greeting newcomers.” Ro’s joy died down and his expression shifted into one of sadness. “How he knows when someone’s going to pop up is beyond me. And him, too, actually. He says he just feels this tug in his chest.” Ro shook his head. “That sounds creepier than us being dead in the first place. Oh man, I sure hope whoever does show up isn’t a psycho criminal. I always worry, but I don’t know why. It’s not like a psycho spirit could kill us all over again. I need to quit watching the news. It’s all bad shit. Why can’t everyone just get along?”

“That’s asking a lot of humanity,” Stefan scoffed. He thought about going with Ro and shook his head. “You go on. I’m in a weird mood and should probably just go off and pout for a while.”

“Are you sure?” Ro uncrossed his arms and reached for Stefan’s hand. Ro’s skin was warm and soft, his grip firm and comforting. “I’d love to have your company.”

Seeing Laine and Sev wasn’t a bad thing, but Stefan didn’t want to hang around another happy, loving couple. Laine and Sev were definitely that. They’d been together forever and still acted like they’d only just met and fallen in love. It was sweet, and caused an ugly spike of jealousy to rear up in Stefan. He hated that about himself.

“Nah, really, I need to just chill out.” Sleep, maybe. Stefan could sleep in his ghostly form just like he had in his live-bodied form. It helped to pass the time when he was bored stiff.

“You sure?” Ro asked again.

Stefan barely refrained from rolling his eyes again. “I’m sure. Jeez, go before I start thinking you’re afraid I’ll float off to the Great Beyond or whatever.”

“Sorry,” Stefan said immediately. Ro had almost lost Conner to the Great Beyond or whatever came after when Conner had gone chasing after a spirit. It’d been a close call. None of them knew what happened to them once they went up, up and away. None of them wanted to find out, either.

“Love you anyway,” Ro huffed, but the tone of his voice as he said it took the sting out of him not disagreeing with Stefan’s self-description.

“You too.” Stefan patted Ro’s back then stepped out of the embrace. “Go watch the lovebirds. I’m gonna head to the cemetery.”

“I don’t think it is. I like seeing the headstones with the long lives carved onto them. Makes me happy those people had a long time with their loved ones.” Stefan nodded. “Catch ya later!”

Stefan let himself float up a few feet then he shot up high and fast before angling toward the graveyard. He hadn’t been lying to Ro. He was glad for the folks who didn’t die young like he had—it gave him hope for his brother and Darren, as well as other people he cared about who were still living. Stefan didn’t want them to die, but if they did, or when they did, rather, he hoped they’d stay here on Earth with him.

As for being alive, he didn’t miss it. It probably made him a weirdo to like being dead a heck of a lot more than he’d liked being alive, but since he was dead, Stefan figured it was okay. Surely being a spirit in the afterlife entitled him to some quirks.

The fast paced, smooth flowing plot captivates readers with quite a bit of humor added by friendly ribbing and pranks among the spirits of McKinton. The well written scenes and details make it impos...

I loved the book. The characters were so fun and Stefan was so adorable. Plus, mentions of other characters made me want to know their stories.

Share what you thought about Whirlwind and earn reward points.