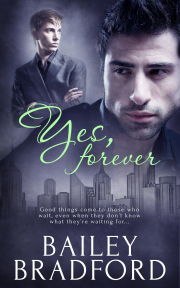 John’s said no in the past, but now he has a chance at forever—if he can move past his doubts and say yes.

John Weston’s misspent youth has left him a more cautious man, one who doesn’t dare take a risk. He works, comes home, and every day seems like the one before. It’s what he deserves—it’s all he deserves. That’s what he’s convinced himself.

Added to his past mistakes, John has struggled with depression off and on for years. He keeps to himself, but he might come to realize that his reasons for doing so aren’t what he believed them to be.

One man appears, and John’s going to have to figure out why he prefers to hide from life, and if he’s ready to reach for something more.

Benji Marks, with his beautiful eyes and bright smile, makes John want things he never thought he could have.

Nothing comes easy, and heartbreak is a risk that John must weigh as he tries to sort out who he is and why he’s made the choices he’s made in the past.

Publisher's Note: This book is also available as a five part serial.

San Antonio was home, but there were some days when John Weston wished he lived somewhere else. Somewhere cooler, with less humidity and perhaps not governed by a man determined to stomp all over John’s rights. When work was stressful, or on the nights he was so lonely he couldn’t sleep, John often fantasized about moving to a different city. He thought about San Francisco, or LA, New York or even Miami or Amsterdam. He didn’t know any more about those cities than the average person, but in his mind, they were bustling, gay-friendly places teeming with available, attractive men.

John wasn’t stupid—he knew the difference between fantasy and reality, but they were his fantasies. If he wanted to imagine himself lusted after by innumerable sexy men while he spent a restless night in bed, then that’s what he would do. Besides, when it came down to it, he wouldn’t leave San Antonio. His family was here, his parents, sisters and brother. Without their love and support, he’d have been lost a long time ago in the morass of depression and hopelessness that had once claimed him.

It was with their help that he’d been dragged, at first unwillingly but then gratefully, out of the mess in his head. It was with their love that he’d come to accept, as much as he could, that he had bouts of depression and likely always would. ‘Mental illness’—John hated those words, not because they indicated he was at fault, but because so many people attached other labels to them, like ‘crazy’ and ‘psychotic’. He was neither of those things, but he did have chemicals in his brain that at times misfired or became unbalanced somehow and sent him into a tailspin. Knowing it wasn’t his fault, that he had a disease like any other kind of disease people could get, didn’t really help. His family did. They reassured him that he wasn’t defined by those two words, any more than his father was defined by his diabetes or his mother by the breast cancer she’d survived. Without his family, John was sure he’d have been so very lost. Perhaps not a stereotype, but still, lost.

Thinking of his family made days like the one John had just had bearable. His boss had been on a tear, snapping at everyone. John hadn’t been an exception. Generally, Mr. Stiles was a nice enough man. A little standoffish, but John understood that since he was the boss and didn’t want to be taken advantage of, should he be too friendly with his employees.

The carpet designing company John had worked for since graduating high school was rapidly growing after years of struggling through the faltering economy. With the discovery of the Eagle Ford Shale in Texas, hotels, motels and apartments were being built at what John assumed must be record rates. They all wanted durable, attractive carpeting with vibrant patterns in some areas and soothing tones in sleeping rooms.

With the influx of oil company execs, oil field workers and their families, everything was close to booming in the area. Restaurants and other businesses were being opened in small towns that had only had a Dairy Queen before, if they were lucky, along with the usual mom and pop places.

After six years working at Carpets Galore, John had moved up the ladder and was now in charge of putting together the designs and actual sales. He’d come a long way from a grunt carpet hauler. But not far enough to escape Mr. Stiles’ temper when there were contracts verging on being unfulfilled because one of their carpet suppliers hadn’t shipped their order.

John shrugged as he walked out to his truck. The sun would set soon, but until then, it was hot—miserably so, as usual in mid-August. It’d be hot at night, too, but at least the sunlight wouldn’t be beating down on him, threatening to cook him alive.

The door handle on his Tundra was so hot that John halfway expected to see some skin stuck to it when he tugged the door open. He knew that he wouldn’t actually lose any skin to the handle but damn, it was uncomfortable to touch. He leaned in and stuck the key in the ignition, chiding himself mentally for not having splurged on the remote start option. He could have had the AC going already if he had.

The truck was John’s pride and joy. It was the first thing he’d really bought on his own. He patted the dash, even though it too was hotter than all get out, and got in the truck. Ice cold air blasted his face. John shut the truck door and sighed happily, glad for the weekend ahead. The seat was too warm for comfort, but the chilly air was perfect. The combination of the two sensations was sending his body into a tailspin—sweat breaking out on his back and neck while the front of him was beginning to get goosebumps here and there.

“This is nice.” He really did love his truck. John’s stomach growled and he closed his eyes for a moment, savoring the freedom of two days off. Other single people might be making wild plans, or exciting plans involving clubs and hookups—heck, even Craigslist and hookups—but John just wanted to unwind, maybe go hiking at Lost Maples or canoeing down the Guadalupe River. The beach would be great, too. There’d be a crowd almost anywhere he went to escape the city, but it’d still be nice to get away for a little while and be outside.

Besides which, he had friends he could hang out with if he wanted to. Most of them liked clubs or had paired up with a significant other, though, and John didn’t care to feel like the awkward third wheel. Although, maybe he would call and see if Henry wanted to hit up the beach or hike this weekend. It had been a while since John had got to hang out with his best buddy.

John shook his head. He needed to stop letting his mind drift—no easy task, but he managed. The parking lot was empty by the time he put the truck in gear and headed out onto the street.

Traffic on Interstate 37 was a mess, the usual afternoon commute hell made even worse by a wreck that everyone gawked at. John refused to look on principle—it irked him to no end that people slowed down to stare. He knew it didn’t make him better than the oglers, but he still felt a little spurt of self-righteousness that might have made him a dick. No one’s perfect. John wasn’t going to castigate himself over it.

It took him an hour to get to his apartment. When there was no traffic, he could get home in fifteen minutes without speeding. John was wrung-out when he parked his truck, his nerves pinging and his hands aching from gripping the steering wheel. Twice, he’d almost been hit by some idiot cutting in front of him, or trying to. The second time, the guy would have broadsided John had he not blared the horn. How anyone could have not seen his red Tundra was beyond him, but it didn’t matter in the end. He hadn’t been hit, and he didn’t have to drive anywhere else tonight unless he wanted to.

John got out of the truck and hit the lock and alarm buttons. The sun was almost set now, but he still felt like he’d be melting into the asphalt if he didn’t get inside. Luckily, the interior of the building was pleasantly cool. John wiped off his brow and waved at Mrs. Royal.

“Do you have plans for the weekend?” she asked, patting her short gray hair.

John caught the message quickly. “No, ma’am, not specifically, although I was toying around with the idea of hitting up the beach or something like that.” He squinted and hoped he looked surprised. “Did you…did you get your hair cut? Because you look more beautiful than usual, and I would swear your hair was longer yesterday.” He really couldn’t tell, but he liked Mrs. Royal. She was sweet and kind.

She patted her hair again and beamed at him. “Why yes, I did, you flirt. Mr. Marks even noticed.”

John didn’t have to fake his smile at that. “He did, huh? Well, well, what plans do you have this weekend?”

This story was a rollercoaster of emotions.

I liked the overall story. At times I felt these two would not be able to overcome their struggles and just live. We all make mistakes and stru...

Yes, Forever is not the grittiest book regarding depression I’ve read recently, but this is not a bad thing because it still gives readers a realistic view of what it’s like for someone living with...

Share what you thought about Yes, Forever and earn reward points.