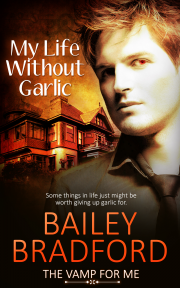 My Life Without Garlic

Book 1 in the The Vamp for Me series

Some things in life just might be worth giving up garlic for.

It was simple curiosity that led Augustin to the vampire dating site—he thought it must be a joke started up by a bunch of weirdos. Man, was he right—but it just so happens that those weirdos really are vampires, and when one shows up at his place, Augustin’s world is turned upside down.

First he’s got a psychotic vampire to deal with. Then he’s got one who is much more fun hanging around.

Except now that Augustin knows that vampires exist, he can’t be left alive. Or can he? When an alternative is offered up, Augustin doesn’t care for it, either. After all, he doesn’t want to be whisked off to some disgusting vampire den.

Tony’s the vampire next in line to lead the coven. He wants to be a fair man, and that means arguing against killing Augustin. If he’s also attracted to the sarcastic, adorable man, where’s the harm in that?

The attraction between Augustin and Tony is undeniable, but deny it is what they both try to do. Someone is going to have to bend or break.

Augustin Carmichael sat down at his computer desk. He set his plate, piled high with spaghetti and cheese, right in front of him. He went back to the kitchen and got the thick slices of garlic bread and a glass of red wine. The wine was a newer addition to his mealtime. Augustin didn’t really like the stuff, but he kept reading about how it was heart healthy and all. Since his dad had died at forty-three from a massive heart attack, Augustin was willing to try anything to avoid the same fate.

That had meant cutting down on the pasta and sugar and carbs and—well, too many of the good things in life, but then again, he wouldn’t have a life for much longer if he wasn’t careful. At thirty-five, he felt like he had a ticking time bomb in his chest instead of a heart.

His doctor chided him about it, too. Augustin was overweight, and his cholesterol was high. His blood pressure was borderline. It was scary shit, so he was making changes.

But he wasn’t giving up his pasta completely, and garlic was healthy as far as he knew. The marinara was home-made and sugar-free, so that had to count as a good thing to eat.

Augustin sat at the desk once he had everything together. He’d done his daily hour-long workout that morning. There was no need to feel guilty as he wound pasta around the fork.

He was not going to choke on that unnecessary guilt either, and waste a wonderful meal. The sauce hit his tongue and the strong flavor of the garlic overpowered the tomatoes and onions. It was perfect! Augustin moaned happily and promised himself another tasty reward in a week.

After he’d eaten a few more bites, forcing himself to do so slowly when he’d really rather have chowed down and shoveled the food in one bite after another, Augustin opened up his web browser. Surfing the ‘Net was as addictive as food was, so he tried to monitor that, too.

The news site he had as his home page came up. Augustin read a few headlines and muttered to himself. He was going to stop reading the news, damn it. It was all bad, and who needed that kind of downer?

Under the ‘Odd News’, though, he found some entertaining articles. By the time he’d read through most of them, he was munching on the last piece of garlic bread. He took a sip of the wine and fought against gagging. Maybe he’d get used to drinking the stuff warm, but he really, really wanted to add some ice and Sprite to it to make the drink palatable.

Obviously he was never going to be a wine connoisseur. He snorted. “Well, whatever. At least I’ll maybe not keel over any time soon.”

He gulped down the last of the liquid then set the wine glass down. An article he’d missed caught his eye and he chuckled. “Seriously?” Augustin clicked on the link. The page loaded and he laughed. “A vampire dating site? What the hell is wrong with people…?”

He chuckled some more as he read the hook, as he thought of it. “Blood-sucking singles, huh? Sounds dangerous to me.” It irked him when all he saw were pictures of women on the main page. “What about guys? Or gays? Are y’all excluding us?”

Then again, maybe the gays had more sense. Augustin thought of his friends Tommy and Georgie. “Okay, maybe not.” The rest of his friends, whatever their sexuality, were definitely above snooping around such sites.

Augustin moved the cursor over the ‘Sign Up’ button. It’d be a great prank to sign up Tommy and Georgie. No, that’d be a dick move, and he was trying to cut down on the number of those he made.

All the featured profile pictures were of women. Augustin pursed his lips. “Do you even do gay vampires?” He groaned. Not only was he talking to himself, he was going on like vampires were real.

He clicked on the ‘Sign Up’ button just out of curiosity. They didn’t really ask for much information. Was that all there was to a profile? What about the zillion questions real dating sites had?

“People really fall for this shit?” He opened a second page and went to a website that issued temporary email addresses. They were only good for ten minutes so he had to hurry.

It was curiosity that had him filling out the profile form. It was boredom, too. Mainly boredom. He had no idea what he’d do, or if he’d ever use the account for anything more than a comparison dating site. He’d been intending to sign up at GayLove4You.com since his love life had been abysmal for— Eh, he wasn’t going to count the months. At least it wasn’t down to years yet.

And, he could write about the whole comparison on his blog. Maybe he’d get a few more followers so he’d have a nice half-dozen. Apparently he just wasn’t that interesting.

So far the site didn’t ask for much, just a username, email, what gender he was and what gender he was seeking, birthday, password… He hit ‘Enter’. After a few seconds, he got an error message. “What do you mean something is wrong? I filled it out right, morons.”

He did it again and received a message that the website was over capacity. Mind boggled, Augustin leaned back and frowned. “You have got to be kidding me!” Paranoia prickled under his skin. “Is it because I said I was male seeking male?”

He bent back over the keyboard, typing in his information again, except altering his search from male to female.

Another error message came up, but he figured out his ten minute email address had expired. “Shit.” He set up another one and created another profile. It got an error message too. “Well, at least I know y’all aren’t bigots, but come on. There can’t be that many people on there!”

He could be a little obsessive. Augustin knew that about himself. An hour of creating false email accounts and trying to sign up at the vampire dating site and he began to question his own sanity. Why was he even bothering? He sure as hell didn’t want to date anyone from a site like that.

This book rocked, hands down. I spent most of the time laughing my ass off. The snark and smartassery is insanely hilarious. The interactions among not only Tony and Augustin were funny, but also with...

Funny and quirky- I loved this book. Ms. Bradford has the makings of a unique and peculiar paranormal series. One which takes everything we know about vampires and twists it to add humor...

Share what you thought about My Life Without Garlic and earn reward points.