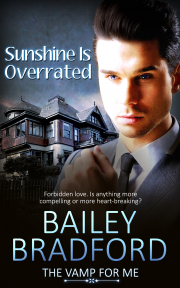 Book 3 in the The Vamp for Me series

Life with vamps is never easy.

Abernathy Meyers is already mated to a vamp, Zebulon. It’s just too bad that Zebulon doesn’t give a darn about him. Abbie’s stuck with the man for eternity—or until they die. Some days, Abbie thinks that can’t happen soon enough. He’s tired of being treated badly, yet he doesn’t really want to make his earthly exit yet.

Because he’s longed for another man—another vampire—for years. Forbidden love—is anything more compelling, or more heart-breaking?

There’s a twisted past, a hidden story linking Abbie, Zebulon and the coven leader, Claude.

Claude lives with a fear of turning to dust at any moment. It isn’t reasonable, but he can’t shake it. He’s let his own fears impede his potential happiness, and instead he puts the needs of his coven first, ignoring his own. But if he’s deliberately blind to one particular human’s needs because that human is a mate to another vampire, then is Claude truly leading to the best of his ability?

It’s a tough question for him to answer and soon, he’ll have to make a choice that will affect him and Abbie, forever.

Abernathy Meyers left his bedroom, relieved that darkness had faded and morning was up to bat. With Zebulon conked out in the coffin, Abbie could relax and not dwell on his personal situation.

He scratched at the bite mark on his neck. Abbie hated that Zeb always marked him in places where hiding the bite only served to make the damn thing more noticeable. He’d have to wear a turtleneck that went three-quarters of the way up his neck to cover it. Living in the desert wasn’t conducive to turtlenecks, and anyway, Abbie didn’t have any.

When he reached the kitchen, Abbie was already feeling a lot happier. There was a familiar voice that had him rushing through the doorway.

“Abbie!” Augustin leaped up and almost toppled them both with the fierce hug he gave Abbie.

Abbie slapped Augustin on the butt after giving him a hug in return.

“Ouch!” Augustin wiggled that voluptuous backside and fluttered his lashes at Abbie. “I’m not into that kinda thing, sweets.”

Abbie snorted. “Too bad. Tony could use a few good spankings.”

“Ha!” Augustin cackled and hugged him again. “I am so glad you’re up!”

“I’m glad you’re back.” They released each other. Abbie couldn’t stop grinning. Sure, he was friendly with the other human mates here, but Augustin and he had really hit it off. “So, you got in last night? I thought you’d make Tony court you for another month or so. Damn, I lost the bet.”

Augustin scowled. “You bet on us?” He turned and glared at the other people gathered in the kitchen. “Seriously?”

Every one of them nodded.

Augustin huffed and started bickering with her.

Abbie couldn’t help but feel like things were going to get better. In the rational part of his mind, he knew that wasn’t true. Zeb wanted him as a mate as much as he wanted Zeb. The only thing keeping Zeb from turning him against his will was the certainty that Claude would kill Zeb for doing such a thing.

But Abbie knew, if he ever got the chance, Zeb would either kill him outright or turn him. Then they wouldn’t need each other anymore.

Both of them were unwanted parasites.

Abbie hummed and glanced at Augustin. “I didn’t even realize the arguing was over.”

Abbie tried not to twitch or poke at his nose to see if he had something unpleasant dangling from it. Instead he carefully splashed oil over the pair of eggs he was frying while leaving the yolks intact. “Sunny side up, right?”

“You do love me,” Augustin sang, doing the lashes thing again.

Abbie burst out laughing. “Man, you must have had a great night. You’re full of it this morning.”

“Oh, baby, I was definitely full of something all night long,” Augustin crooned.

Abbie ignored the pang of envy. “I’m really glad you’re back. And I’m happy for you and Tony.” He used the spatula to remove the eggs from the pan. After he’d set them on a plate, he looked at Augustin. “You’re positive he’s who you want?” Abbie asked quietly, his cheeks heating with embarrassment. Surely the question gave too much of his own situation away.

Something that could have been sympathy, or pity, flitted over Augustin’s expression, but it was gone in a flash. “Yeah, I’m am.”

Abbie nodded and ignored the weird silence between them. Augustin was waiting for him to confess or explain, and Abbie wasn’t going to do either. “I don’t know how anyone eats runny eggs. I like mine scrambled and not the least bit gooey.”

“You like yours burned and rubbery,” Porter called out. “That’s why you have to drown them in that hot sauce shit.”

Abbie turned and waved the spatula at Porter. “Just cuz you’re a wuss about having some spice doesn’t mean I am.” Oh, he felt like a big ol’ liar for that one. It’s true enough for food, for God’s sake. Nothing else was being discussed at that moment.

But Abbie would swear Augustin knew.

Out of all of the books in this series, this one is by far the best. I believed in the connection between Abernathy and Claude. The sass and the humor from the other coven members was all still there...

There was plenty of excitement to go around and it certainly kept me flipping pages until I finished the book in one sitting. Sunshine is Overrated is another great addition to The Vamp for Me serie...

Share what you thought about Sunshine is Overrated and earn reward points.

Joyce: Welcome to HEA, Bailey! Please tell us a bit about your new release, Sunshine Is Overrated, which arrives on Oct. 20.

Bailey: My latest release is Sunshine Is Overrated, the third book in The Vamp for Me series.