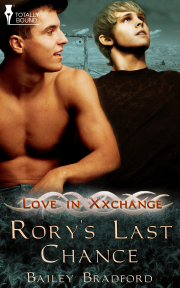 Book 1 in the Love in Xxchange series

Chance Galloway thinks walking into the Xxchange might just be the biggest mistake he's ever made, but one stranger who seems to know just how to touch Chance is going to make it a night he'll never forget.

Chance Galloway is used to being alone. Once a wild and voracious player, he became a loner after a traumatic event in his past tore his world apart. Older and wiser, years of loneliness and a moment of weakness drive him to seek another's touch. The only problem is, the club he chooses to visit is filled with PYT's—pretty young things Chance simply doesn't find appealing.

Rory Calhoun has his own baggage that haunts him. Still, he gives in to curiosity and decides to check out the local club. Inside he spots a man who fires up every fantasy Rory's ever had. The only problem is, despite a quick, enthralling encounter, the stranger makes it clear he isn't interested in PYT's, a label Rory knows would be slapped on him in a heartbeat if the stranger ever saw his face.

Rory has one unexpected opportunity to make Chance see him as a man, and he's going to grab that opportunity, and Chance with both hands.

Publisher's Note: This book was previously released at another publisher under a different name. It has been revised and re-edited for release with Total-E-Bound.

The noise blaring in the Xxchange was almost obnoxious enough to have Chance turning away from the bar and heading back to his truck. How anyone could call the clattering racket in the place music was beyond him, and that was without taking into account the caterwauling that someone was trying to pass off as singing. Sounded more like two bobcats going at it than anything he’d ever considered singing. Nah, the cats had more talent, to be honest.

He let his eyes adjust, determined to give this a shot, because it’d been way too long since he’d got laid and he needed this something fierce. Problem was, he’d long ago grown tired of bathroom blowjobs and one night stands. Maybe he’d just grown up—then again, maybe not—he was out trolling. Not the same, he decided. When he was younger, he’d fucked for the fun of it. This, tonight, wasn’t going to become a habit, or a challenge. It’d just been too long and something inside him yearned for the comfort of another body close to his for more than the time it took to get off.

“Sappy fool.” Chance glanced around the bar, taking in the bodies grinding together on the dance floor and the forms huddled in pairs or groups in dark corners. God, he felt old—he was old compared to most the people here. No way was he going to get out on that dance floor and flop around or dry-hump until he jizzed his jeans. And he was for damn sure not going to put on a show in some corner, or a table, or a booth.

This whole idea was stupid to begin with. He wasn’t interested in a twink, which seemed to be the majority of the bars’ patronage—he didn’t have anything against them, simply wasn’t his thing. He’d always preferred his men built more like himself, not body-builder cut but firm rangy muscles and rough around the edges, and definitely closer to his own age.

Yeah, this was not the place for him. Chance started backing out, noticing that a couple of cute young things were staring at him—too cute, too young. Looked like a good hard fuck would break ‘em. He shook his head to let them know he wasn’t interested, but it only seemed to have the opposite effect. The two pretty boys were soon making their way across the bar in Chance’s direction, determination evident in their every move. Memories Chance would rather keep suppressed swirled to the forefront of his mind—there was a reason he didn’t care to mess with young, pretty-looking men. He narrowed his eyes at the two men, hoping they would take the hint.

“Like spoilt kids who can’t stand being told no.” Chance didn’t care who heard him. Matter of fact, if he got really lucky, one of those little boys would be able to read lips. He’d give them a hand signal but he was pretty sure they’d just take it as an invitation. His pride wouldn’t let him back out and run now—he’d feel like a wuss. Chased off by two boys—well, they were boys to him, and it was not going happen. He’d drop them both if they got grabby on him. Probably make him feel like a puppy-kicker, but he would deal with it.

“Why don’t you let me help you out here, cowboy,” a low voice rumbled in Chance’s ear as a pair of strong arms wrapped around his waist, pulling his back up against a firmly-muscled chest. He savoured the feel of corded strength surrounding him, the pinpricks of lust that shot through at each point where their bodies pressed together.

Hard to miss the press of an engorged dick that close, and if Chance was any judge of that particular piece of male flesh—and he had to believe he was—it was quite an impressive dick that nestled against his ass. His own cock took only a beat before firming right up and pushing uncomfortably against the zipper of his jeans.

“Jesus.” Chance shot his cock a glance, surprised at the immediate response. That hadn’t happened in a while—he couldn’t remember the last time he’d perked up quite so quickly. A soft chuckle tickled his ear and rumbled from the chest behind him into his back, vibrating throughout his body. “Looks like those boys decided to give up the chase,” that deep voice purred, all sex and fire and smug masculine strength. Chance watched the scowls flitter across the boys’ faces before they turned and walked off.

“Huh. Guess so.” Chance started to turn only to stop when the hold around his waist tightened. He didn’t know whether to be more turned on or irritated all to hell. When soft lips started nibbling along the side of his neck, finding their way to the sensitive patch of skin right behind his ear, Chance gave it all up and let out a low moan. God, when had anyone, including himself, taken the time for such a thing?

“Them boys not your thing, cowboy?”

Absolutly awesome love story. I loved how Rory decides to win Chance over.

...a well-written, sexy story...Blazing hot and passion filled sex that is guaranteed to set your e-Reader on fire!

Share what you thought about Rory's Last Chance and earn reward points.