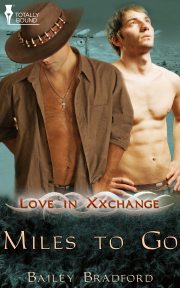 Book 2 in the Love in Xxchange series

Max Jenkins watched enviously as the love between his employers, Rory and Chance blossomed. He never thought to have someone of his own to hold until Bo shook up Max's world and made him question everything he believed he knew about himself.

What might seem like an impossible dream for two wounded men can be a reality if they'll only believe—in each other, and themselves.

Max Jenkins has been the foreman on Chance Gallagher's ranch long enough to know love between two men can be a powerful thing. Despite his rigid upbringing, Max has watched Chance and his partner Rory, has seen the deep and abiding love they have for one another, and Max has found himself thinking about things he'd never acknowledged before. When Max's friend, Bo Daughtry, is almost killed in a violent attack, Max realizes he has some decisions to make. Years of fear and ignoring his own needs make it difficult, but for the love of one man, Max will fight himself and Bo's doubts and insecurities.

Reader Advisory: This story is part of a series but can be read as a standalone title.

Evenings in the bunkhouse should have been peaceful, but Max kind of hated them. Too much time alone since he was the only employee here at the Galloway Ranch. Well, technically Rory was the other hand, but since he and the boss had hooked up and got all moon-eyed over each other, Rory had packed up and moved into the big house.

Which left Max alone most evenings unless he was invited over for dinner with Rory, Chance, and Rory’s sister Annabelle. Since she hadn’t been at the ranch long at all, and it’d been a goodly amount of time before that since Annabelle and Rory had seen each other, Max turned down most dinner invites. Best to let family have time together—and maybe he felt a little like the odd one out.

Luckily everyone believed him when he’d tell them he was tired or wanted to watch some show on TV. Truth was, sleep was hard to come by, always had been, and as for watching TV, well, he tried but sometimes all those people laughing and loving on there just made Max feel more alone.

“Well, guess I’m in the mood for a big ol’ pity party,” Max muttered as he stepped into his bedroom. Lord, I don’t even want to be in my own company if I’m gonna be a whiny bastard. Max snorted and started undressing, nearly landing on his butt as he tried to pull off his boot. Rolling his eyes at himself, he hobbled to the bed and plopped down on the edge. Bending over, he plucked the boot jack out from under the frame and dropped it on the floor. That little piece of wood made getting his boots off so much easier.

After a cool shower chased away the lingering Texas heat that seemed to have embedded under his skin, Max dried off and put on his boxers. Jeans and a ratty cotton shirt were next. He decided to forgo socks. It was still rather warm in the evenings and keeping his feet cool helped keep the rest of him the same. Max would have loved to have sat around in his boxers, but with Annabelle living on the ranch now, he never knew when it was safe to just let it all hang out. That girl tended to blow in like a blonde-headed tornado, not caring if Max might be stark-ass naked.

Not that he ever was, other than when he got cleaned up, but even then he wouldn’t have put it past Annabelle to just throw open the bathroom door if she wanted to talk to him. Thinking about the possibility made Max’s skin so hot he bet he fairly glowed, and not in a good way. He’d flat-out die of embarrassment if something like that happened; Max couldn’t imagine someone seeing him in the buff. Even when Rory had lived here, Max had been careful to keep his stuff covered, and not because Rory was gay. Max didn’t care about that. He was just...shy, which was probably stupid considering he was well over forty.

Max realised his mind was jumpy tonight, bouncing all over like a toddler who’d sucked down a bag of sugar and capped it off with a quart of caffeinated soft drink. He needed to settle down, and he needed to eat. His stomach was gnawing right through his backbone. He headed into the kitchen and opened the refrigerator, rubbing his rumbling stomach as he looked over his options for dinner.

Eggs seemed the easiest; if he was cooking for a full crew he’d have put more effort into it, but it was only him. Max reached in and grabbed the carton. He added a stick of butter, some shredded cheese that he’d have to examine closely before using, and a pathetic looking green pepper. He’d just set the food down on the counter by the stove and was fixing to go back and check the expiration date on the milk when the phone rang.

Figuring it was Rory or Annabelle, or maybe even Chance calling to nag at him to join them, Max muttered as he walked over to pick up the phone. Before he could even get a word out, a light tenor came through the line.

Max frowned and pulled the phone away from his ear an inch or so. Someone was awful perky. The man’s voice sounded vaguely familiar, and like a smack to the head, it jostled his brain into gear. He kind of knew that voice.

“Bo?” Max knew it had to be the blond haired man he’d met up at the big house a while back. Bo Morris, Chance’s former fuck buddy.

Share what you thought about Miles to Go PRINT and earn reward points.