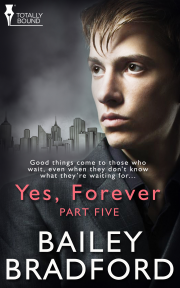 Making up his mind to get what he wants—who he wants—and going after it are two entirely different things.

Struggling with depression and adjusting to new meds, John finds his resolve to convince Benji of his sincerity. It's hard enough to drag himself out of bed each day, and the medication makes him sluggish, which doesn't help.But it also begins to stabilise him, to ease back the depression and help John to see what he wants and what he's been lying to himself about. The things people do and tell themselves to help them cope can also confine and constrain them. John wants no tethers save the love of one man.He'll need to come clean with himself, and with Benji. Talking is so much more difficult than fucking, but John will do whatever it takes to bring him and Benji together.

The final installment. It's great to look back over the story as a whole and see the growth and changes in John as he really takes control of his life.

I have been a fan of this serial from the beginning. I have enjoyed watching John and Benji's relationship grow from just being friends into something more. In Part 5, it has a more serious tone...

Share what you thought about Yes, Forever: Part Five and earn reward points.