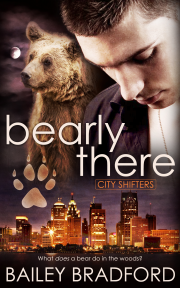 Book 1 in the City Shifters series

One surly bear and one bunny boy…what could possibly go wrong?

Jagger Osterman is having a bad day. In fact, he’s not the slightest bit impressed with 2015 at all. His job is on the line, and it’s not like he loves being a marketing wunderkind, but he has to do something to pay the bills. If he had his way, he’d just vanish into the mountains and live out his life as the black bear he yearns to shift into. Unfortunately, Jagger doesn’t have the time to let his beast run. He has responsibilities that he can’t walk away from.

Kevin Kelly could tell Jagger a thing or two about bad days, bad years, and just out and out bad luck. He made the mistake of smarting off to a curandera years ago and hasn’t been able to shake the curse she put on him yet. There’s not an area of his life that hasn’t been screwed up in one way or another. As a pronghorn shifter, he’d be okay on his own in the wild. Sure, there’d be predators, but Kevin had come to realize the worst predators were the human kind.

But he can’t shift. He’s been solidly bound to human form since being cursed.

Two men, both trapped in their own ways. They’re about to find out that freedom comes in many forms.

It was going to be another one of those days. So far, 2015 had been filled with them.

“Jagger, the Montemayor case is on the line. They hate the ad campaign idea. Hate it.” Debbie growled the last two words out as she tossed the file on his desk. “Assholes. Screw professionalism here. They’re just being jerks because they want a high-quality ad at a bargain-bin price.”

Jagger picked up the file and opened it. It was a brilliant ad campaign he’d planned, if he did think so himself. He was good at his job, though more and more, he found himself disillusioned about it. Crap like this doesn’t help at all.

“What is it, specifically, that they hate about it?” he asked, glancing up at Debbie. With her blade-sharp cheekbones and Nordic good looks, she could have been a model. Would have, but according to her, she was too heavy and she wouldn’t starve herself for anyone. Jagger didn’t get the too heavy part, but he was aware that society had warped visions of both male and female beauty.

And he was glad he had Debbie on his team, because she was one tough, smart person.

“The cost, of course,” she seethed. “They don’t want to pay three million for a successful and innovative campaign. They want something similar to this but for less than half the cost.”

Jagger wanted to throw the whole damned file away. “Well, that’s gratitude for all our hard work, huh?”

“Yeah,” Debbie scoffed. “After you brought them back from the brink of bankruptcy and doom three years ago and Sonny Montemayor swore he’d be indebted to you and your brilliance forever. Asshat.”

“It’s business.” And Jagger hated it. “What is an asshat, anyway?”

“Don’t give me any shit, Jag,” Debbie warned. “I know you’re even more pissed off than I am over this.”

Jagger didn’t bother to deny it. Debbie had worked with him for seven years and she knew him well. “Have we tried reaching Sonny?”

Debbie snorted. “Oh yeah, several times. He’s miraculously out of the office every time, and his cell goes to voicemail. Cowardly bastard hasn’t returned any of our calls directly. He’s had his assistant pass along messages. It’s like he’s reverted to a fourth-grader.”

“Seen it before when someone becomes successful and wealthy.” Jagger used a finger to trace a path down the numbers for the ad’s costs. “There’s no way to do this any cheaper. If he wants a whole different campaign for his organics, then it’ll be equal to what he’s willing to spend. We’re not carrying the costs for this.”

“Renner won’t be happy,” Debbie pointed out. “He just about shit a pony over the cruise ship campaign. As if we could have predicted that whole debacle. Then with the Fortuna company dropping us for that new ad agency? Yeah, Renner will not be happy if we lose this client.”

“He won’t be happy if we eat the cost on it, either,” Jagger muttered. “God damn it. I need to talk to Sonny, or someone who can sit down and go over other options. That’s not going to be his assistant.”

“You might have to go all stalker-like on him and hunt him down in person.” Debbie sat in the chair across from him and took a pen out of her suit pocket. “Hand me some paper.”

Debbie preferred to work the art for her ideas out by hand first before moving on to the more complicated techniques. Jagger passed her a notepad he had in the top drawer. “Have at it. I’m just going—” Movement outside his office window caught his attention and he frowned. There were definitely people approaching his office.

Shit, he’d hoped no one would remember. As stressful as the office atmosphere had been lately, there was more to think on than Jagger’s birthday.

But maybe he was wrong, and whatever was going on had nothing to do with his birthday.

Debbie looked up at him, then twisted around to peer over her shoulder. Her smile in profile warned Jagger that he was about to be embarrassed at the very least.

“Come on in!” Debbie called out.

“Don’t—” Jagger started, but the door was flung open and his jaw dropped as he stared at the blond-haired man wearing a pink bunny costume.

“Just be glad we only paid for the singing telegram and not the strip-o-gram,” Debbie said as the blond stepped right into the office.

“Well now,” the bunny man drawled as he cast his hazel gaze on Jagger and smirked. “Is this the birthday boy? No one told me he was so handsome.”

Jagger snapped his mouth shut and leaned back in his seat. He was probably a nice, bright shade of red, but he’d be damned if he’d let himself be any more embarrassed than he already was. He crossed his arms over his chest. “Debbie, maybe you could move to one side so you’re not blocking the view.”

Bearly There is a different take on shifters with curandera’s, curses and the search to end the curse. It also takes you on a journey of family, the good, the bad and the ugly and just how much energ...

This is a cute little shifter story about finding love, being true to yourself and believing that which cannot be touched...Recommended for a light read on a rainy afternoon.

Share what you thought about Bearly There and earn reward points.

Other books in the City Shifters seriesView Series Page