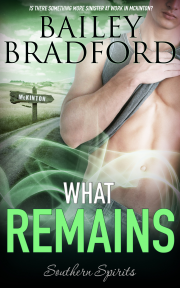 Book 6 in the Southern Spirits series

Severo and Laine thought they had it all. They had great friends, each other—and the spirits of McKinton, TX.

Until Sev gets a call from his sister asking to visit. He's been the family pariah for most of his life. This sudden offering is something Sev had never even dared to hope for. Laine is suspicious but supportive. Then their world is altered when all the spirits in McKinton vanish on the same day.

Missing spirits, a coven of Wiccans, and a sister and her family all hit McKinton at the same time. Laine doesn't know who has stolen the spirits, but he's going to find out.

Was it the well-meaning Wiccans? Or is there something more sinister at work in McKinton?

Sheriff Laine Stenley stood outside squinting against the bright morning sun. A sharp, biting wind slapped against him, cold enough to sting his cheeks and have him pulling at his jacket. He lined up the tab then proceeded to zip the heavy material shut.

Octobers in Texas could be tricky things, weather-wise. One day it would be sunny and in the seventies, and the next, like today, the temperature dropped so fast and the wind kicked up and all a person wanted to do was find a warm place to hide away.

If he had a choice, he’d be home in bed with Severo, his partner of over three years. Just thinking about all that smooth, honey-brown skin pressed against him was enough to warm Laine more effectively than his jacket had. He closed his eyes and let the memories from earlier this morning work through him. Sev, smiling, his celadon-colored eyes heavy lidded with sleep, his full lips stretched in a sultry grin. Flashes of taut, dark nipples and ridged muscles, silky black hair and nimble fingers, a firm, rounded ass and a hard, dripping cock—everything about Sev still called to him.

There’d been no lessening of the desire between them, no doubting their love or commitment. The years had sped by so quickly once Sev had come into his life. Laine figured he’d blink and be standing here, a whole decade gone by, and still he’d feel this all-encompassing love for his partner.

A little fear niggled at him, telling him things couldn’t go on as they had been. It was tempting Fate or God or someone way up the food chain, being this happy.

And I’m just a melancholy, moody fool. Laine shook his head and tugged his Stetson lower, shading his watering eyes. One of these days he was going to break down and buy some sunglasses before the Texas sun fried his retinas. Sure enough it must have already cooked a few brain cells, making him all contemplative and, though he hated to admit it, superstitious. He couldn’t shake the unease caused by his guilt over being happy. And that’s what it was, Laine knew it. Sev was always on him about feeling responsible for everyone, trying to convince Laine he wasn’t—but he was, in a way, and his failures cut deep.

A bright yellow Miata turned in the parking lot, as if summoned by Laine’s thoughts of guilt and responsibility. He watched as the driver parked. Rich Montoya got out of the vehicle and Laine waved at him.

“Did you lose your trucker?” Laine called out, smiling slightly at the way Rich lit up with the mention of his lover.

“Nah, Chris is at the house visiting with his mom and a few of her friends. Coven. Whatever.” Rich grimaced as he approached, and if Laine wasn’t mistaken, there was a ruddy flush crawling up the man’s neck.

“Thought you got along with Miriam.”

Rich’s cheeks darkened. “I do,” he said, his shoulders tensed. “It’s just weird, having a Wiccan High Priestess for a mother-in-law. She and a crew—well, some of her coven, I mean—just did some extra special blessing thing for us. I figured why argue, it couldn’t hurt anything.” He shrugged, glancing down as he scraped the toe of his shiny boot over a crack in the sidewalk. “Chris said she was bringing the High Priest, too. They want to bless the Hawkins Senior and Youth Center.”

The way Rich muttered that last bit nearly made Laine chuckle. He swallowed it down, aware of how uncomfortable Rich was and what the man was asking without saying. “When do they want to do it? I don’t think Carlin and Virginia will have a problem with it, but I’d need to clear it with them first.”

Hopefully it wouldn’t be during the ribbon-cutting ceremony or something like that. McKinton was a great little town, a lot more tolerant than it used to be, but some of the residents might freak over having a Wiccan High Priestess and High Priest dancing around— Laine narrowed his eyes at Rich. “They aren’t going to be dancing around naked or anything like that, are they?”

Rich paled, his normally warm brown skin going an unattractive shade of gray. He gulped and muttered, “God, I hope not.”

Laine arched an eyebrow at Rich. It was getting harder and harder not to snicker. “Are you planning on participating in the ceremony?” Laine might just go along to keep an eye on the whole deal himself instead of assigning a deputy the task. Maybe he’d bring Sev along, too—Sev would make sure Laine didn’t put his foot in his mouth or tease Rich too much.

Of course, if there was dancing involved, Sev would probably be right out there in the middle of it. Especially if it was naked dancing. That didn’t do anything to discourage Laine from the idea of bringing his partner at all.

This book was a great addition to the southern spirits series. I love the spirits in this series so was upset when they disappeared as I love the interaction between them and the living in the previ...

Share what you thought about What Remains and earn reward points.