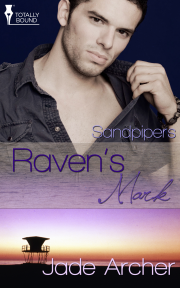 Book 2 in the Sandpipers series

Sometimes the strength to fight the past lies in the love and friendship of the present.

Mark Carter has taken care of himself and those around him since he was a teenager. But with his younger brother and sister now packed off to college, he finds himself suddenly alone. Throwing everything he has into his new position at Sandpipers Restaurant leaves little time for anything else. And that's just fine by Mark. Then Raven stumbles into his life and everything changes. Mark can't help wanting to know more about the mysterious man—which is easier said than done. Raven is painfully shy, a single parent and stutters, especially when he's nervous. But Mark is determined to get to know the warm, intelligent man he glimpses beneath the quiet exterior. The question is, will Raven let him?

Raven finally has a chance to start again. He's determined to put the past behind him and do whatever it takes to create a normal life for his young son, Ryan. Unfortunately, it's not as easy as it sounds. He doesn't have much acquaintance with 'normal', and the past has a way on intruding on the present no matter how hard he tries to escape it. Can he trust Mark with his secrets? And more importantly…should he?

Mark wiped his hands on a clean dishcloth and cast a professional eye around the kitchen of Sandpipers Restaurant. Dave put the finishing touches to the fruit salad, Andy whisked batter for pancakes, and Brody had already started on the clean-up. Everyone looked busy, but their movements were organised and controlled. The heat from the ovens, the clatter of pans and the sound of fast, efficient mixing filled the space. Yet it was an industrious, productive cacophony that soothed something deep inside Mark—a need for order and direction.

Unfortunately, he couldn’t relax and lose himself in the rhythm of the kitchen. Not yet.

"Did you get the prawns shelled and deveined, Brody?"

They’d added prawn omelette to the brunch menu this week. It would be a disaster if they were somehow forgotten in the rush.

"The pastries all ready to go, Dave?"

As Mark turned his head, Andy fixed him with a dark look and continued to whisk the pancake batter vigorously—as if daring Mark to even ask if he’d forgotten anything.

Mark knew he was probably coming across as an overbearing asshole...again. But he needed to check everything was ready. As the executive chef, it was his head if things went wrong.

Allowing a small nod of approval, Mark started towards the doors that separated the kitchen from the dining area. Experience had taught him good preparation now meant less chance of things descending into chaos later. If he came across as a fussy prick while making sure everything was done right, so be it.

Fortunately, everything in the kitchen looked tight and ready to go for another busy Sunday morning brunch. But Mark knew he wouldn’t be able to relax until he’d done the rounds.

"I’m going to check out front. Finish up and take a break before the rush, guys."

"Will do," Brody called as he dumped another dirty bowl in the clean-up area.

A snort of laughter at Dave’s antics was Andy’s only acknowledgement. Which was fine—Andy was taciturn, but a damn hard worker. And that was all that counted in Mark’s book.

As he pushed his way through the doors, Mark had to admit they were a good team. He’d caught a lucky break picking up the head chef’s position here six weeks ago. No prima donnas. No bullies or egotistical assholes making everybody’s life a misery. They all just got on with the job. It was a nice change from some of the kitchens he’d worked in.

Entering the dining room, Mark took a moment to check everything out on the ‘elegant’ side of the kitchen doors. The wait staff were all bustling about in a last minute rush to put the finishing touches to the room, but no one appeared flustered or distressed. There was just the steady dull clunk of cutlery and glassware being laid on crisp white linen and a low babble of chatter punctuated by the occasional burst of laughter. Everything seemed to be under control and on schedule out here too.

A band of tension he hadn’t realised he’d been carrying around eased across his shoulders and the tight, wound up feeling at his core loosened slightly. Wandering through the room—continuing to examine the last minute preparations with a critical eye as he went—Mark finally allowed himself to relax. It looked like they were ready.

I loved, loved, loved Raven's Mark!...a well written story that will pull at your heart strings while making you want more. It is a definite must read...

The characters are exceptionally creditable in this heartwarming episode...Jade Archer has created an amazing romance with compassionate characters. I thoroughly enjoyed Raven's Mark.

Share what you thought about Raven's Mark and earn reward points.

Other books in the Sandpipers seriesView Series Page