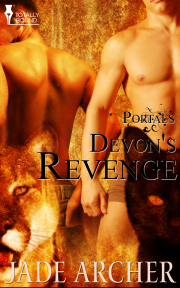 Book 2 in the Portals series

Devon never wanted to be free. He never wanted to leave the safety of the harem. Forced out of the only home he's ever known, he's cold, hungry and…angry for the first time in his life. Revenge needs to be very sweet.

Faced with an impossible choice, Devon threw away his only chance of returning to his Master and the sheltered life of a pleasure slave. Now, abandoned and abused, Devon is struggling to find his way alone in a strange new world—Earth. Being a stray certainly isn't easy, and replacing his Master is proving almost impossible. Then he meets Nate.

Nate isn't looking for a mate. He certainly didn't expect to find him in a club about to go down on another man! But something about Devon calls to him like no one ever has before. Now if he can just make sure Devon isn't the most dangerous kind of shifter—the kind that would do anything to return to their master—perhaps they can work on exploring the mutual attraction that's simmering between them, ready to explode.

Unfortunately, there are more challenges still ahead for Devon. More for Nate and Devon to face than learning secrets and earning trust with a new mate. There are enemies moving in. Some they never knew existed, and some that still haunt Devon's nightmares. And they're ready and waiting to take any chance of a happily ever after away forever.

“You stupid slut!” Master Gailin screamed as he slapped Mirra’s cheek and sent her sprawling across the cold flagstone floor.

Trembling in shock and fear, Mirra barely resisted the urge to curl into a ball and screw her eyes shut—a futile attempt to make it all go away, but still very tempting nevertheless.

She couldn’t believe the Master had found them. She’d thought the disused root cellar would be the perfect hiding spot. So far from the main living area of the castle, it was almost in the catacombs and nearly lost to living memory. It had taken her weeks to find it. Yet somehow they had still been discovered.

Covering the side of her red, throbbing face with a trembling hand, Mirra crawled back to the small wicker basket in the centre of the little stone room she had chosen so carefully. She cowered over the woven rim protectively, but with a deep sense of foreboding.

While she didn’t make a sound, the two tiny kittens inside—little more than bundles of black and brindle fur—weren’t so circumspect. They mewled pitifully, giving voice to their distress as they huddled together against the side and tried desperately to reach her.

They were so frightened. The Master’s anger—something she’d managed to shelter them from since their birth nine days earlier—was overwhelming. And Mirra knew just how they felt. Her own terror clawed at her insides—demanding she get away and hide somewhere dark and safe. She wanted so badly to grab the kittens up and run as far away as possible. But she couldn’t. There was no escape. Master Gailin would find her. Master Gailin always found her.

She couldn’t even risk touching them to offer comfort in case it made the situation worse. But then, as Master Gailin stepped up to tower over them—his dark eyes flashing with rage, his thin face white and drawn tight with anger—Mirra knew it probably couldn’t get much worse than it was right now anyway. She stayed still and silent regardless, long years of training and experience locking her in place.

“Did you think you could hide this from me?” Master Gailin roared, his fists clenched tightly by his side as his entire body vibrated with fury. Turning, he paced away furiously.

Mirra simply hunched her shoulders—instinctively trying to make herself as small a target as possible. She knew better than to try to defend herself. All she could do was keep her eyes carefully lowered in submission and hope the Master’s tirade would burn off some of his anger.

The hardest part was not to comfort and console the terrified kittens. All she wanted was to pick them up, cuddle them close and gently stroke their soft, new fur. Tears burned her eyes, the pain of denying her instincts lodging in her throat and making it hard to breathe. But she kept her trembling hands to herself.

This is bad. Oh! This is so bad. She cinched her arms around her thin waist and barely resisted the need to begin rocking herself.

Her mind worked frantically. Had she been careless and betrayed the kittens somehow? Or had she been betrayed by someone in the household? Was it one of the other cat shifters, jealous of her position as current favourite amongst the harem slaves? She would gladly give the ‘honoured’ position to someone else, she thought miserably. How could someone betray her little family?

Panic hit her hard and fast at the thought. If she had been betrayed, what else might they have told the Master? Could her mate be in danger? Through sheer force of will she stopped herself from looking over at the tall, silent warrior by the door, but it was almost painful to deny the impulse—her mounting terror for her lover nearly overpowering her.

Somehow her growing fear must have communicated itself to the kittens, because she suddenly felt two raspy tongues bathing her forearms. Hanging onto the wicker edge precariously they had managed to clamber up the side of the basket and now offered tiny wet kisses—as if trying to ease her worries—before they both tumbled back in.

Oh! My poor babies, she moaned softly to herself, crouching down lower in a desperate attempt to hide them and their innocent antics.

Abruptly, the Master stopped pacing—his long, flowing robes billowing out around him. Arcane symbols of power glowed faintly over the material.

...exciting second book...filled with action, mystery and exceptionally sensual lovemaking...I look forward to the next episode.

...fast-paced and intricate...paranormal creatures, magic, and a modern day setting intricately blends into a unique and captivating series

Share what you thought about Devon's Revenge and earn reward points.

Other books in the Portals seriesView Series Page