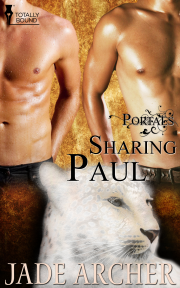 Book 3 in the Portals series

Three men when the world sees only two. One desire—to be loved and accepted. All they need is a miracle.

Paul and Joshua's life has never been easy, or even easy to explain, but they've always had each other. Two distinct entities sharing the same body—the body of an escaped cat shifter slave rescued and brought to Earth as a child. They're lifelong friends, lovers and soul mates. But Joshua is slowly dying—unable to sustain the psychic link that binds him to Paul. They desperately need a miracle. Unfortunately, miracles seem to be pretty thin on the ground these days.

Then one night they stumble on Matt as he's being beaten by a group of thugs in a park. He's human, he's a mess and he sets off every protective, possessive instinct the pair have. Could rescuing Matt be the answer to their prayers, or just another complication in an already far too complicated existence?

Meanwhile, there are forces at work trying to sow seeds of confusion and dissent. Forces that would eat away at all the cat shifters of the Bayside pride have worked so hard to gain.

Can Paul, Joshua and Matt discover their miracle before it's too late?

“Please. Be reasonable, Mr Wittman. Mr Ashton is a very wealthy man. Surely we can work something out.”

“No.” Paul stared down at the twinky little personal assistant, or private secretary, or whatever the fuck he called himself, and crossed his arms over his chest.

He knew exactly how intimidating he looked—with his thick, muscular arms emphasising his broad shoulders and six-foot-four frame towering over the much smaller man. And honestly, he knew it wasn’t the poor guy’s fault he worked for an asshole. An asshole who had been thrown out of The Cat Club one too many times for getting messy—violently messy—for Paul to even consider letting him in again, no matter how much money the prick had. Unfortunately, at least for Twinky, Paul didn’t give a toss right now. He wasn’t in the mood to deal with this sort of crap tonight.

“Please reconsider. I’m sure he’ll promise never to let something like this happen again.”

“You mean like the last time he promised not to start fights in my club? Pardon me if I don’t put a lot of faith in Mr Ashton’s promises. The answer is still no.”

“He’s never going to accept that,” the man continued, with more mettle than Paul had given him credit for. Paul was actually pretty impressed despite himself. “What am I supposed to tell him?”

Paul didn’t let his increasing respect for the man in front of him sway his decision any more than the fact the man was cute as all hell.

“You can tell him to go fuck himself for all I care. When I say someone’s banned, I mean they’re banned. No second chances. No get out of jail free card. Just fuck off and go find somewhere else to be a dickhead.”

Paul steeled his heart when the cute little blond nibbled anxiously on his lower lip.

“I think—” The man looked around, almost as if he was trying to work out where to go now. “Can I speak to the manager please?”

Apparently Twinky really did have bigger balls than Paul realised. The little guy had squared his shoulders and raised himself right up to his full five-foot�four-odd height with a rather astonishing display of backbone as he stood up to Paul. Pity it wouldn’t do him any good.

“Go ahead. Nate’s right over there by the bar.” Paul pointed out Nate—his boss and friend—who was in charge of the club, knowing full well Nate was even less likely to let the guy's boss back in. ‘Mr Ashton’ was a bully, and Nate hated bullies with a passion.

Paul watched the slightly nervous looking man hurry across the club towards the bar, but quickly lost interest when Nate started shaking his head emphatically—just as Paul knew he would.

Leaning back against the wall of the club, Paul cast his eyes across the now somewhat subdued club patrons milling around. A few die-hard stalwarts and the occasional lonesome loser were all that were left of the energetic Friday night party crowd this late in the evening. Or early in the morning as the case may be. And in less than an hour even they would be gone.

Rolling his shoulders to try to relieve some tension, Paul barely suppressed the urge to start moving restlessly from foot to foot. Now that he wasn’t occupied with fucked up rich pricks who assumed the world existed to kiss their asses, he found his mind wandering to thoughts of Joshua.

Joshua was resting at the moment, but something was very wrong. It had been for a long time now. Paul could feel Joshua’s fatigue and lethargy battering at him. It was driving him absolutely insane not being able to go and check to see if he was okay. Again. Right now. But he knew he couldn’t risk drawing attention to them by ‘dropping out’ of the real world. They’d worked too long and hard to fit in here as part of the pride. Well, as least to the extent they were ever likely to fit in anywhere. He wouldn’t go back to the bad old days when people stared at them and cubs were taught to avoid them because they acted weird sometimes.

So here he stood, in a dark, smelly bar, watching the drunks and deadbeats and counting the minutes until he could kick their asses out the door. The last sixty minutes of his shift could not go fast enough.

a psychological characteristic with an interesting twist...a fascinating saga with a dash of humour...emotional drama that I greatly enjoyed

This story is as unique as it is poignant. Most people would look at the idea of two separate identities existing in one body as crazy. It was understandable how people looked funny at Paul as he zoned...

Share what you thought about Sharing Paul and earn reward points.

Other books in the Portals seriesView Series Page