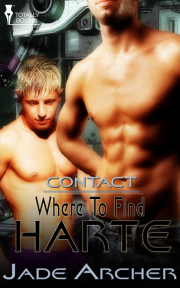 Where to Find Harte

When you're a run-away slave, the very last person you should want to make contact with is a bounty hunter. Pity Harte can't seem to keep his hands off the man.

Harte is in trouble. Big trouble. And the only hope he and nineteen other cat man slaves have of surviving is to get a message out about what is really going on in the secret medical research facility they're being held at.

Unfortunately, the next to no chance Harte had when he ran away looks like a completely lost cause now he's been captured by the infamous Logan McCabe. If only the man didn't look like a walking wet dream he might be able to work out how to get out of this mess.

Logan has always prided himself on his professionalism and dedication to doing a good job, every time. Falling for a target and reneging on a contract isn't covered under either. It's simple, not something Logan has ever considered doing before. Until Harte. Now Logan finds himself putting his heart on the line, regardless of his commitments. A pity the gorgeous man of his dreams doesn't seem to have any qualms about crossing the line and grinding his misplaced affection into the dust.

Between stubborn bounty hunters who won't listen, a lab full of homicidal medical personnel, a system rife with abuse and injustice and a rather inconvenient internal time bomb threatening to end his life, Harte really is in a world of trouble. One that might not include the happily ever after he's been hoping for.

Reader Advisory: This book is part of a series, but may be read as a stand-alone title.

The forest was quiet and still. Too quiet. The booming, throaty calls of the walfrin were all gone now. The chattering and squawking of the myriad native bird species were suddenly silent. Even the high chirping sounds of the insectoids had vanished. It was as if the rapidly cooling afternoon air had suddenly frozen and everything stood poised and waiting. But it wasn’t the coming of a spring thaw that they were all anticipating.

Something was out there. Something the rest of the forest wasn’t used to being around. Something that didn’t have the first clue about how to stay hidden and unobtrusive as it moved through the thick vegetation of Gerilan.

Logan crouched in the undergrowth and waited patiently. It wouldn’t be long now, he thought as he concentrated on the small break in the trees ahead of him. Soon his hunt would be over.

It was a pity really—the hunt was his favourite part. Well, except for the getting paid part of course. But unfortunately, his prey was woefully unprepared and totally inept in the thick, jungle environment. It had been a short, completely unfulfilling pursuit. Like so many he had taken on recently.

Gods, he hated the Mebian system. There was just something wrong about the place. But a job was a job, and he prided himself on being a complete professional. That and the fact the pay was just too damn good to refuse.

Pushing the stray thoughts aside, he ran through what he knew of his target. Admittedly, it wasn’t much, but the owners had told him the runaway was training as an agricultural scientist. He was probably used to flat, arable land, fields of carefully tamed golden strogrom and laboratories.

Logan stifled a derisive snort. This place would have come as a very rude shock. He wondered if the little cat regretted running yet. It might make recapturing him a hell of a lot easier if he did.

What makes them think they can make it out here anyway? he mused absently, as he ignored the foot long growellin slug crawling over his boot. The small proximity alert curled around his ear feeding him detailed information about his surroundings had already let him know it was there. It was a harmless, completely vegetarian species and just passing through. Not worth giving his position away for, in other words. Now if it had been a ferrallin slug…that would have been a completely different story.

Still, it did make him wonder. This forest was absolutely teaming with critters—some harmless, some definitely far from it. Why would anyone voluntarily run into it? He literally had years of experience and training in survival and combat to fall back on, and he never came here lightly.

Logan shook his head at the sheer idiocy and ignorance it would take to run away here without extensive, thorough preparation. Even with all his high tech equipment, tracking scans and an arsenal worthy of a small army, it had still taken him almost a full day to reach a viable intercept location. The terrain was just that unpredictable and inhospitable. He’d been forced to park his Hyperlight space cruiser nearly twenty-four clicks away because he hadn’t been willing to risk trying to get closer.

He frowned slightly at the reminder that they would be forced to spend the night out here. It was getting too late to try to get back now. But, while staying out in the forest was something he didn’t relish, he could handle it if he needed to. The runaway, on the other hand, was damn lucky to have survived last night out here on his own.

Logan really hadn’t expected to be able to track him with the bio-scanner. It seemed far more likely that the man would have already been inside one of the other life forms around here! But Logan had managed to find him—the proverbial needle in the strogrom mound. All in all, the little runaway really was a pretty lucky cat actually.

4.5 out of 5! In the creation of these men, Jade Archer has imbued them with so much character that they're people to whom I can, and eagerly do, respond. And all I can say about that is �Long...

4.5 out of 5! I was delighted to know there is at least one more story being worked on for this series. Jade Archer has created wonderful characters...enjoy this latest release.

Share what you thought about Where to Find Harte and earn reward points.