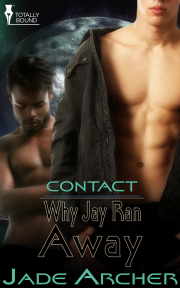 Why Jay Ran Away

When you love someone you give them your heart. But if it turns out they may literally want it - run like hell! This time there won't be any contact without one hell of an explanation!

Jay loves Nic unconditionally. Completely. That is until he accidently overhears something he shouldn't. Something that suggests Nic is involved in a terrible scheme to use other cat clan members in the worst possible way.

Now Jay's on the run. He's cold, hungry, terrified and heart-broken. But could there be more to what he's learnt about Nic than meets the eye? Is there any chance he could have made a mistake? And even if he has, can Jay ever forgive his lover for his lies?

Reader Advisory: This book is part of a series, but may be read as a stand-alone title.

Jaycen took a deep breath as the hoverlator doors slid open to the executive partner’s floor of the building. He knew there was no way of avoiding these final few steps onto the plush, wellorin weave carpet. But he still hesitated as long as possible.

Finally, the car itself began to get impatient with him.

“Selected location achieved. Would you like to select a different destination?” the synthvoice asked primly.

“No thank you,” he replied instead.

“Then please alight from the vehicle and have a nice day,” the synthvoice requested officiously.

Fat chance of that, he snorted, but quickly took a few steps into the deserted corridor as the hoverlator’s doors closed and it whisked away.

Great, even the artificial intelligences in the Mebian system were dictating to him now, he realised despondently.

Sighing, he hurried down the deserted corridor. He had bigger things to worry about than uppity AIs. Things that definitely weren’t likely to wish him a good day. Things that were best avoided, if possible.

Keeping his head down, he tried his best to appear invisible. Thank Ion for his nondescript, dark brown hair, he thought anxiously. It was such a rarity among his people, but a true godsend here. If he kept his pointed ears flat against his head and his contract bands hidden under his shirt sleeves, he could almost be overlooked as a slave. That was a pretty good thing throughout the Mebian system. In this office, it was almost vital.

Clutching the data pads he was carrying a little closer to his chest, he tried to slow his rapid breathing. Act calm. Appear unafraid. Look as if you're expected somewhere. He ran through the mantra he and the other contract slaves at Drake and Associates lived by over and over in his head. But it did nothing to help soothe his frayed nerves.

Suddenly, two up and coming lawyers—reputed to be as aggressive out of court as in—stepped into the corridor, and he froze in fear and indecision. They were deep in conversation, animatedly discussing some recent courtroom stunt one of the fully incorporated lawyers had pulled and didn’t appear to have noticed him yet. But looking around, he realised there was nowhere to hide and running would only draw attention to himself. His only option was to press himself flat against the wall and wait to see what happened.

Breathe, he warned himself silently.

Turning his eyes down, he stared intently at one of the data pads he was holding, as if studying something important on its lifeless, blank screen. He stood quietly as they approached and remained utterly motionless as they passed, feeling as stiff and tense as the formisteel digging into his back. But the only thing he could really do now was pray with all his heart that they wouldn’t turn on him.

When the pair continued on their way and turned the corner at the far end of the corridor without even looking at him, as if he didn’t exist, he breathed a heavy sigh of relief.

Safe, he thought. At least for now.

Jade Archer's Contact Series is quite phenomenal...Relatively short, chock full of emotional depth and characters to fall in love with and root for; what more could a reader ask? Absolutely nothing!...

Share what you thought about Why Jay Ran Away and earn reward points.