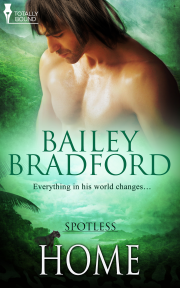 Book 3 in the Spotless series

Solomon wanted nothing more than to stay at home and raise his siblings, until he’s kidnapped and everything in his world changes.

Solomon survived being abused by his father. He took care of his many siblings during that time, and continued to do so after he’d been rescued by his half-brother Steven, and Steven’s mates Cole and Shaun.

Now Solomon’s grown up. He’s still raising his family, and he wants to keep everyone right there, safe and with him.

Then he’s kidnapped, and he’s taken away. He’s got a secret that helps him escape his captors. That, and one of the jaguar guards who is supposed to be trying to capture him again turns out to be his mate, while the other guard is a woman who’s fed up with the cruelty of the clan who sent her after Solomon.

Azil has known only subservience all his life. The jaguar clan he’s from is warped, but he doesn’t know that. It’s just the way things are. It takes a taste of freedom, and finding a man who believes in him, to help free Azil from the chains of his past.

But someone wants to make sure neither he nor Solomon gets a happy ending.

Reader Advisory: This book contains references to past physical abuse and sexual assault.

Publisher’s Note: This book is part of the Spotless series and is best read in order. This series is linked to the Leopard’s Spots series.

“I don’t want to help with the dishes,” Rhea said, stomping her foot. With her bottom lip pushed out and those big blue eyes of hers, she got her way entirely too often.

If her current tendency to throw a hissy didn’t get curbed quickly, then there’d be a world of trouble from her in another few years. Solomon pointed toward the kitchen. “I suggest you help with the dishes like you’re supposed to if you ever want to see your Nintendo 3DS again.”

Her pretty eyes rounded. “You wouldn’t!”

Solomon arched one eyebrow at her. “Care to bet your 3DS on that?”

Rhea stomped her foot again. “You used to be nice!”

“So did you,” Solomon told her, keeping his voice level. His intention wasn’t to hurt Rhea, only to make her aware of how she was behaving, or misbehaving, as it were. Parenting was hard. Parenting sixteen siblings? Sometimes that was a nightmare—not that Solomon would ever walk away from his responsibilities.

“I think she should have dish duty for the next month.”

Solomon just barely kept from stomping his own foot at Steven’s suggestion.

“I hate you!” Rhea yelled before pivoting and running into the kitchen.

“Not helping,” Solomon snarled as he turned to Steven. “I had it under control.”

Steven held both hands up. “Calm down. I was only trying to help. You’re right. I shouldn’t have butted in. It’s just…” He sighed heavily and rubbed his brow. “She used to be so sweet, and now she’s… That.” Steven gestured in the direction of the kitchen. “I don’t get it. It’s like aliens took over one night while she was sleeping.”

Solomon chuckled and felt his irritation drain away. “She’s not the only one who’s had fits about stuff, Steven.” The younger kids had been more prone to such things than the older ones, like Erdwin and those around his age. “I think they’ve forgotten most of the bad that was done to them, and they’re probably as close to normal as any kid can be. Hence, the fits. Most parents have to put up with them.”

Cole and Shaun joined Steven and Solomon, with Cole shaking his head. “My dad could just look at you and make you behave.”

“Your dad is the most powerful shaman in existence,” Solomon pointed out. “And his mate is creepy.”

Cole barked out a laugh.

Shaun giggled but bobbed his head.

Steven grunted and crossed his arms over his chest. “Cliff isn’t such a badass.”

Cole hissed and lightly thumped Steven on the back of his head. “Language.”

“That means you get to do all the laundry tomorrow,” Solomon gleefully pointed out. That was the rule—curse and you had laundry duty. With so many people living in one residence, laundry was a never-ending cycle of hell.

“If you cuss again, that’s two days,” Shaun warned. “And trust me. You don’t want two days of laundry duty. It kills the soul.”

Solomon was amused by Shaun’s dramatics. “You should start up an acting troop. Think of it—you could put on shows when the pack gets together for ceremonies. Oh!” Solomon bounced on his toes. “You could re-enact Remus and Cliff’s big fight with the evil shaman!”

Shaun slapped a hand over his own heart. “Oh, my dream come true! To be on the stage—” Then he ruined his performance by guffawing like a lunatic.

“Maybe we spoil them,” Steven said, returning to the original issue.

Solomon wanted to argue that they didn’t. Lying wasn’t something he was good at, however. “I want them to have everything,” he admitted. “Starting with better behavior for some of them, so I suppose we need a family meeting.”

Steven slid an arm around Solomon’s shoulders, speaking as he did so. “First, we strategize.”

“Yes,” Solomon agreed. They’d learned to make sure they presented a united front and all when it came to discipline and rules, although Steven did on occasion screw that whole thing up. It was his natural tendency to lead, to be the boss or alpha or whatever, Solomon knew that. He also knew it wasn’t in his own nature to let someone else run the show, not when it came to family. “We should get Kylie, Erdwin, Vanessa and Jora, too,” he added. Now that those four siblings were eighteen, he believed they should be involved in the parenting if they wanted to be.

Shaun patted his back. “Now who’s trying out for drama king?”

Steven gave him the stink eye. “I’m not acting. That’s heartfelt dread I’m showing there. And I still can’t get over Erdwin being eighteen already. He looked so little when I first met him. Are you sure you had his age right?”

Solomon snorted at the familiar question. Steven claimed Erdwin had to have been ten at the oldest when they’d all been rescued, but the truth was, Erdwin had been malnourished and it’d stunted his growth. Fortunately, five years of good food and safety had fixed that. “You know he’s eighteen now. Stop stalling. We’re doing this family chat. Besides, it’s not so bad, having more people weighing in on…” Solomon didn’t finish. It was harder having more opinions bantered around. “They should get a say. That’s what we agreed originally.”

“We were idiots,” Steven said bluntly. “Why did we think, oh hey, we’re doing all right raising this herd of kids—let’s make it more challenging by letting each one that turns eighteen have a say in raising the others? And why didn’t anyone tell us how stupid an idea that was? Everyone argues!”

If they’d had proper parenting themselves, they might have done things differently. Solomon doubted it, though. After all, Cole had had a good upbringing with Remus as his father. Cole hadn’t spoken out against their plan.

Cole shrugged as if he knew what Solomon was thinking about. “Seemed like a good idea at the time.”

They split up to find the four so they could have their meeting. Cole asked Remus and Cliff to come watch the younger kids, much to the delight of the children and their babysitters.

Everyone knew Cliff was the biggest kid of the bunch.

Solomon watched the big, scary-at-times shaman spin Mett like he was a toy. “You go right ahead and tell him he’s grounded. I’ll be here laughing at you.”

Steven nudged him on the arm. “You don’t think I could take Cliff?”

Solomon didn’t see any right way to answer that honestly.

This couple just exudes lots of intense desire and happiness that grabs the reader and pulls them in.Solomon and Azil both capture the heart with their emotionally gripping pasts. Spine tingling tension...

The sweet romance and Solomon and Azil's simple joy being together is obvious, and their story is a delight to read. The action and suspense of the story is equally exciting and comp...

Share what you thought about Home and earn reward points.

While writing under tight deadlines—which I prefer—I still manage to get distracted by The Shiny. It happens. A lot.

The Shiny can be anything from a thought I have, to someone coming in and chatting while I’m trying to work, to needing food because I’m ready to eat my laptop. I get distracted from the realities of day to day life by writing. I also have the attention span of a toddler hyped up on sugar at times, and therefore can’t listen to music as I write.

What do you like to do when you’re not writing?
Well, I write a lot. Besides at least one book a month, I also run a free story on my blog with thrice-weekly installments. It’s all fun to me. But, I like to try new recipes, and I take frequent road trips. I’ve never been good at staying in one place for long, so it’s not uncommon for me to pack a bag and hit the road. I also love to hike, which I do as often as possible. Some day I’ll get to hike the Appalachian Trail. It is going to happen.