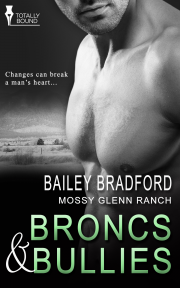 Frankie never let anyone close, until Duke refused to give up on him.

Frankie Freemont knows everyone at the Mossy Glenn thinks he’s a jerk for breaking things off with Jody. Letting people get close to him just isn’t something Frankie does. And older men? No way. Frankie doesn’t do that daddy thing so many younger guys seem to like.

Which is why he can’t understand his reaction to Duke Edmonds. Duke has always made him nervous for no reason Frankie can figure out.

Duke suffers a concussion, and Frankie suffers the consequences of a bad choice he makes. With his family wanting him for only one thing—money—and Duke slowly breaking down his defenses, Frankie doesn’t know which way is up.

Duke is determined to prove to Frankie that he’s a good man—they both are. Duke’s worked hard to overcome his youthful past. He’s still ashamed of being a bully years ago, and does everything he can to make sure he never makes mistakes like that again. Being a better man is hard at times, but Duke’s spent his whole adult life doing so.

Now he and Frankie have to decide what they want, and how to go about getting it. That means making some changes that can break each man’s heart.

It’d been too long since Frankie Freemont had had a little girl sitting on his lap. He missed his five younger sisters something awful, especially the youngest one, Merry. She’d only been two when he’d left home five years ago.

So to get to hold Jody’s little girl Prissy, who was almost three, well, that was a real treat. Plus, Jody sure needed the help. Frankie could see that. He knew Jody well, in the Biblical and regular sense. With the latter, better than Jody knew him, Frankie would guess. Jody was young and scared and had just found out he was a daddy the day before.

Then of course Frankie had had to make it a bit more stressful for Jody by cutting off their mutual fuck buddy sessions, because there was no way Frankie was doing a dad. Guilt weighed heavy on Frankie, but he’d deal with it. Jody would be better off with someone else anyway. He needed serious and Frankie didn’t.

“You got you some pretty hair, Prissy,” Frankie said to the little girl.

She turned big blue eyes on him. He saw the wariness there. Well, no wonder. She got dumped here with a daddy she never met and is surrounded by a bunch of strangers, poor kid.

“You like this here porch swing?” he asked her.

Prissy’s bottom lip quivered and Frankie prepared himself for some bawling. She surprised him by leaning her head against him and cuddling. “Yeth.”

Her lisp was cute, and once again it made Frankie long to see his siblings. “You can call me Unca Frankie,” he told her, knowing then and there she was going to have him wrapped around her little finger. She just settled into him like she knew he was good folks. Frankie didn’t think he was, but he would never in the world hurt a kid. God knew the world was going to hurt them enough as time went on.

“You want me to tell you a story?” Frankie asked Prissy. When she nodded, he continued. “There was this goofy boy, all elbows and kneecaps and sass. He had a bunch of little sisters, all pretty and sweet. But there was one, the littlest one. Her name was Merry and she really was the happiest, laughingest child. So sweet, you know?”

What was he doing? Frankie pulled himself out of his memories. There were some stories he didn’t need to be sharing with other people. He could turn his current one into fiction easily enough so as not to disappoint Prissy, though.

“Merry was a princess,” he continued, staring sightlessly out at the ranch. “She was kind and sweet—well, I said that already, didn’t I?”

Frankie chuckled and spun out a silly story about unicorns and tangled manes. As he did so, he used his fingers to work out a few knots from Prissy’s hair. He’d let Jody do it properly later, with a hairbrush.

Except he figured out that Jody didn’t know jack about brushing a little girl’s hair and Frankie ended up volunteering for hair duty. Part of him wanted to hate doing it, because damn, it hurt to interact with Prissy. Mostly, he told himself to get over it because Jody and Prissy both needed his help.

And, after the way he’d just dumped Jody, Frankie couldn’t deny that he felt like the biggest asshole ever. Jody hadn’t deserved to be hurt.

I knew it would happen, though. Knew it when I started messing around with him. He’s too innocent when it comes to sex and those kind of guys always get clingy. Thank God we didn’t fuck-fuck, or it’d be a lot worse for him.

When Frankie got a chance during his lunch break, he snuck off away from the other cowhands and called home, something he didn’t do often.

Frankie leaned against the barn, the sun warming him pleasantly, his hat shading his eyes. He listened to the rings, and knew after the fifth one the call was going to voicemail. It was tempting to hang up—he hated talking to machines. If he didn’t, his mom or Garret would see that he’d called and worry that something was wrong.

So when the pre-recorded message came on, Frankie waited for the beep then spoke quickly. “Hey, Mom, I was just calling to see how everyone’s doing. All’s good here. I’ll send a card this Friday. Love y’all.” He hung up, feeling like a dork, certain he sounded like one, too.

Frankie looked up at Duke Edmonds, who was standing not a dozen feet away. He hadn’t even heard the big guy approach. “Yeah, you found me. Now I’ll count and you go hide.”

“I’m fine,” Frankie said, putting on his best smile. He started to saunter back to the outdoor table where everyone else was sitting. Duke made him nervous, not that Frankie had ever let it show. The man was older than Frankie by who knew how much, but he was undeniably good-looking in that weathered cowboy way.

And he was nice—congenial, he guessed it was called. But those steel-gray eyes sure seemed to peer right into Frankie’s soul, and since he wasn’t sure he had one of those in the first place, Frankie preferred to stay clear of Duke.

There was probably some sort of daddy hang-up there too. Frankie had no problem admitting he had issues with his sperm donor—and that was all the fucker’d ever been. Some hotshot Svengali who’d seduced a naïve seventeen-year-old girl. That’s how his mom told it, and Frankie had no reason to doubt her.

Duke settled in stride beside him. “Things okay with you and Jody?”

Duke shrugged. “Y’all were seeing each other, I thought, but—”

“Jesus,” Frankie muttered. “We were just blowin’ off steam. Ain’t like we were married or anything. And what the hell? Gossip moves faster than the events it’s about. How does that happen?”

“Ain’t nothin’ anyone said. Just felt some weird tension between y’all this morning. Didn’t mean to pry.” Duke veered off toward the corral and Frankie watched him for a second.

He didn’t even remember Duke being in the bunkhouse earlier, but of course he would have been.

Despite the fact that Duke hadn’t done any such thing, Frankie couldn’t help but feel scolded. It was his own conscience blasting him for being a shallow slut. I never promised Jody nothin’ but an orgasm when we got together those times. He knew I wasn’t interested in more, and he never said he wanted anything deeper.

What would I have said if he’d asked for more? As if Frankie really had to ponder that question. He’d have been gone so fast his heels would have left singe marks on the floor. Jody was a good kid and all, but Frankie wasn’t up to the emotional ties the guy needed to set down.

I’m a shallow fucker. Frankie wished he were different. He slowed down as he approached his fellow workers. Were some of them looking at him like he was something lower down the chain than pond scum?

Could he blame them if they were? What kind of man dumped a scared fuck-buddy who needed every friend he had?

I highly recommend this book (and this series) if you like hot sexy cowboys, older men/younger men, life issues, some angst a touch of drama, some twists, a bit of a tearjerker, smokin’ hot sex and a...

Rest assured, Bradford managed to rip my heart out and ground into the dirt as per usual in this installment in the Mossy Glenn Ranch series. Thankfully, she put it all back together again by the f...

Share what you thought about Broncs and Bullies and earn reward points.

Clint is the king of westerns for me. This won’t be the only time he’s on the list. He’s so crochety and worn-looking, he just makes an awesome cowboy.

What was the inspiration for this latest novel?

Redemption. People can change. It might not happen very often, but it is possible. Duke was a bully when he was a kid. He turned that around and has been trying to make up for it for a long time. Forgiveness, self-growth. Frankie hurt Jody without an outward show of regret, really, and he had to deal with that and the repercussions from it.