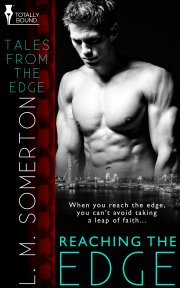 Book 1 in the Tales from The Edge series

Reader Advisory: This book contains scenes of D/s, including chastity play, and references to past rape and current PTSD. There are also non-consensual plot elements with an aggressive former Master which include kidnapping, bondage and the forcible insertion of a butt plug.

I love Ollie and Joe! They are so good together and compliment each other so well. I liked how they start out getting to know each other and then are thrown together more because of circumstances. I enj...

When Joe meets Olly, sparks fly, wills are tested and ultimately, they each find what they were searching for - understanding and love. Poor O...

Share what you thought about Reaching the Edge and earn reward points.

You live in a small village in the English countryside, so how much do these surroundings affect your inspiration?

I haven’t used my village as a setting yet, though it has potential! I do use places that I’ve been — often my favourite parts of the country. I used Cumbria in Mountain Rescue and Exmoor in The Portrait, both very special to me. The Edge series is set in London and North Yorkshire, so full of contrasting landscapes…