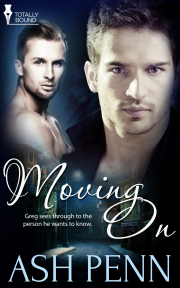 Cody’s trying to move on from an abusive past relationship. New neighbour Greg is the ideal man to show him how.

It’s moving day for Cody and his sister Justine. Cody’s hoping for a fresh start in a new town. He wants to remember what it is to be young, single and alive. Most of all, he wants to move on from a toxic relationship that’s resulted in crippling panic attacks, which severely limit his ability to live his life as he wishes.

Greg Foster’s boyfriend left him six months ago and he’s still recovering from the humiliation and pain of their break up. When he introduces himself to his new neighbour, he senses an instant attraction to the aloof young man who can barely meet his eye one moment, yet is ready to jump into bed with him the next.

Cody soon realises his mistake in sleeping with Greg. The man isn’t one-night-stand material, and it would be unfair to lead him into something more. Cody doesn’t feel capable of having a relationship. He’ll certainly never love anyone again.

Despite Cody’s constantly shifting moods, Greg sees through to the person he wants to know. All he has to do is convince Cody to give them the chance to find happiness in each other.

Reader Advisory: This book contains scenes that allude to past experiences of physical, psychological and sexual abuse.

Damn Justine and her romance addiction. Cody straightened and turned around. A quarter of the way up the flight of stairs below stood a guy—an athletic, older guy dressed in a pair of running shorts and a thin, sweat-stained T-shirt.

“I got it.” Cody squatted then set about gathering up the errant books. He’d come across as hostile. Justine wouldn’t be pleased. She’d made him promise to begin their life here on friendly terms with the neighbours. She said a smile or two towards an offer of friendship would help with his recovery. Cody had no idea if there was any truth in the theory, but she’d read half the self-help manuals available on Amazon, so she should know. Just as well those kinds of books hadn’t tumbled to the floor. Titles such as Surviving Domestic Abuse hardly made for good first impressions with the new neighbours, if this guy was one of them.

“You sure?” The guy bounded up the rest of the steps on the toes of his rather well-worn trainers. “If that’s your van outside, you’ve got a fair way to go before you’re—”

“I said I got it.” As a frown creased across the guy’s forehead, Cody attempted to relax his jaw. Justine had warned him about how he should keep his moods to himself. New home. New start. He was supposed to be making an effort here. “Thanks all the same,” he added, with a terse smile.

“Well, the offer’s there if you need me.” The guy’s tone remained friendly enough. “I’m a couple of doors down. Number twenty-six.” When he raised a hand in gesture, Cody glimpsed sweat dampening his armpit.

Cody used to jog, but had never had the drive or determination to work up much of a sweat. This guy must sense his weakness already. Why else would he have offered to help? He looked a few years older, but kept himself in far better shape. He probably assumed Cody sat at home all day reading racy romances. He would be fifty per cent right. Maybe even seventy-five.

Cody straightened and pushed at the box with his foot. “They aren’t mine.” He wanted, if nothing else, to put that possible misunderstanding to rest. “They’re my sister’s. She just popped to the shop for some drinks. The lift’s broken and shifting these boxes is thirsty work.” The words came out in a rapid stream, but Justine would be proud of him for making the effort to initiate a polite conversation, even if most of the words belonged to her.

The guy scratched at thick, chestnut curls peppered by wisps of grey. “The lift here tends to do that at least twice a week.”

“Weird. We didn’t see that written down anywhere in the agency details.” Cody smiled, trying out Justine’s theory, and the guy smiled back. His dark eyes twinkled, and Cody warmed to him instantly.

Well, maybe not quite that instantly. Cody stared at the hand, before slipping his own into his jeans’ pockets. “Cody.”

Greg lowered his arm. He wiped his palm down his shorts, but the sweat wasn’t the reason Cody declined the hand. One step at a time, Justine said. Making small talk with a neighbour was progress enough for one day.

“You want to come in to mine for a drink?” Greg asked, just as brightly as before. “I have water. Or a cold beer.”

Cody shook his head, and focused on the box of books. He couldn’t meet the guy’s eyes a second time. “I said I’d have half this done by the time Justine gets back.”

“Ok, right. In that case, give me two minutes to get rid of these.” Greg pulled off his headphones and unclipped an iPod from his shirt pocket. A waft of the man’s earthy scent seasoned the stale air as he passed. Cody savoured the aroma before exhaling. He squatted to pick up the box.

“I did say I could manage,” he called after Greg’s retreating back.

Greg spun around while jogging backwards. “You want this done by the time your sis gets back from the shop, right?”

“All right,” Cody decided. He straightened then hefted the box to waist level. Once again he tried a smile. Once again his smile was returned. This time, tenfold. Maybe there was something to Justine’s theory after all.

“Where the hell do you think you’re going with my stuff?”

Greg Foster paused with a large box marked ‘bedroom’ resting heavily in the crooks of his bare arms.

The blonde pony-tailed young woman who’d yelled at him from halfway down the street sprinted over and blocked his path into the building. She planted her feet in the doorway and her arms either side of the frame, like a human security gate.

Dressed in a blue sweatshirt and faded denims, with a Tesco Express carrier bag dangling off her arm, there could be no mistaking Cody’s sister. Sharp featured, even sharper tone, but Greg recognised Cody in the cool depths of her blue gaze that added around two hundred pounds worth of stubborn to her slight frame.

The relationship that builds between the two men is wonderful.It really teaches you to remember everyone is worth being loved and is ok to lean on close friends for comfort!

I found the story sweet and lovely.  A nice bed time story.

Share what you thought about Moving On and earn reward points.

Sex definitely isn’t easy to write. The main emotion I experience when writing those scenes is frustration. Sex scenes need to be incredibly sensory to evoke the ideal response from the reader, and the difficulty is in creating new and fresh descriptive prose. I approach sex scenes exactly as I do any other. The only difference being I need silence rather than background noise, and I prefer to work at a desk rather than on the sofa.