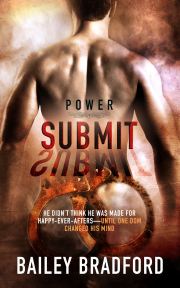 Book 2 in the Power series

Larry didn’t think he was made for happy-ever-afters, until one Dom changed his mind.

Life takes twists and turns one can never predict. When one of those twists turns out to be a Dom Larry is attracted to, Larry’s secretive life and hidden desires threaten to come bubbling to the surface.

But for that to happen, he’ll have to learn to trust someone.

Two men, neither of them expecting the connection that bursts to life between them, are about to learn the power in true submission.

Publisher's Note: This book was previously released elsewhere. It has been reedited for release with Pride Publishing.

Seeing Hank so sappy and in love with his Dom and soon-to-be husband left Larry in a state of depression for almost a week. Not that he let anyone know he was such a petty little shit, and he was happy for his bestie. Hank deserved his happiness. Larry had even pushed him toward it months ago, goading Hank to approach Thomas, the Dom Hank had been ogling.

So Larry wasn’t sure why he felt so down about it all. ‘Live in the moment’ was his motto most of the time. But not when he had to make trips back to where he’d grown up.

“Jeez, no wonder I’m a mess.” Larry tried to shake off his funk. He’d been stuck in that hellhole for the last few months and had just returned home. That was the true source of his moodiness. The past was clinging to him like a bad rash and he needed it gone.

Larry didn’t want what Hank had. It was preposterous to believe such a relationship would work for him.

He wasn’t envious after all, and was just confusing his emotions because Larry didn’t examine those things that often.

All he cared about was that he was clean, that he lived in a clean home—apartment, if one wanted to get technical, but it was his home.

After he’d showered and gotten dressed, Larry was ready to go to work. His volunteer position at Jen’s Soup Kitchen was one thing Larry always looked forward to. Yes, it was depressing to see so many people in need, but helping them and at least trying to make a difference were two things Larry lived for.

And not even his best friend Hank knew about it.

Then again, Larry hadn’t ever been good at letting people in, and bragging about doing a good deed seemed like a skeezy thing to do.

The stroll to the soup kitchen took almost half an hour, but Larry enjoyed the sunlight on his skin and the gentle breeze, though he could have done without the exhaust fumes.

There was already a line forming at the shelter, although breakfast had just been served. Larry waved to some of the regulars, relieved to see Mrs. Eddison, one of his favorites, sitting on a bench in the shade.

“Hey, Mrs. E, how’s it going?” Larry asked as he stopped in front of her. She looked healthy for someone in their late seventies, with few deep wrinkles except the crow’s feet around her eyes. Her laugh lines were reminders that she was a happy person despite her circumstances.

“Larry, I’m glad you’re home,” Mrs. E said, smiling at him. She patted the bench. “Sit down for a moment. You don’t have to help with lunch yet, do you?”

“I always have time for you,” Larry replied, taking a seat beside her. “Did your door get fixed?”

Mrs. E tutted. “I told you not to spend the money on that. The chair under the doorknob—”

“You deserve more than a chair under a doorknob,” he cut in. “Everyone here deserves more than they have.” And it broke his heart.

“Including you, son?” Mrs. E patted his leg. “You saved me from being homeless with that grant you found, and you’ve kept up repairs when something’s gone wrong with the house. Don’t you deserve better than to be alone, or to have to go back to a place you hate?” She sighed. “What did your idiotic parents do to you?”

Larry’s throat went tight and he made an unfortunate squelching sound when he tried to swallow. Leave it to Mrs. E to get right to the heart of it all.

“You’ve gone back before, but never for this long,” she continued. “And maybe I’m wrong, maybe you have wonderful parents. If so, I apologize. But I can see your pain, son.”

Larry wanted to jump up and run into the soup kitchen, or back to his apartment—anywhere away from the questions Mrs. E was tossing his way.

“Ever since you chased those thugs off years back, you’ve watched out for me,” Mrs. E said. “Who watches out for you?”

That was an easy question to answer. “I do.” Larry cleared his throat then plastered on a bright smile. “I’m a tough guy.”

“Never said you weren’t.” Mrs. E gave his leg another pat. “There’s more to life and living than being tough.”

Sometimes there wasn’t. Larry nodded rather than argue or explain. “I’m glad your door is fixed.” And he was glad he’d used a chunk of his savings to keep Mrs. E from losing her house, not that she ever needed to know about that.

If she’d had enough money to splurge on dinner guests, Mrs. E wouldn’t have been a visitor at the soup kitchen. Larry would have helped her out more, but she refused to knowingly take any money from him.

He did know her weak spot. “Well, I’ve been craving some Pho. If you’d like to share some with me again sometime, that’d be great.”

Mrs. E’s pale blue eyes lit up as she clapped her hands together. “Oh, you! You know I can’t say no to Pho!”

Larry stood then bent to kiss Mrs. E’s cheek. “No one should say no to Pho. I’d better get to work.”

“You’re a good man, Larry. Anyone who doesn’t see that isn’t worth bothering with,” Mrs. E said. “You’ll always be a son to me. You know that, don’t you?”

Larry’s eyes burned worse than when he had to chop up onions. It was nice to know someone in the world cared for him like family.

Share what you thought about Submit and earn reward points.

Other books in the Power seriesView Series Page