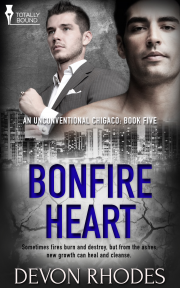 Sometimes fires burn and destroy, but from the ashes, new growth can heal and cleanse.

Thierry Alexander is the deputy mayor of Chicago, a city he loves but can’t save on his own from the corrupt political system. His assistant and lover, Eduardo, is also known as Cesar, the head of the underground resistance movement. He has been working behind the scenes for years and finally gets what he needs—enough information to get the US government involved and take down the criminal elements strangling the city he loves.

But they need to act fast because legislation is about to be enacted that will give rise to social and ethnic purging in Chicago. Not knowing who they can trust, they will have to put their faith in one another and risk everything to save a city.

Thierry Alexander grimaced inwardly as he rounded the corner and saw the mayor coming straight toward him, though he had enough presence of mind—and practice in concealing his true emotions—to keep his facial expression from giving him away.

“Alexander, good. I’m glad I caught you before you left.” The salt and pepper hair was perfectly sprayed into place as always, and the mayor was dressed for success in an expensive suit. From his outer appearance, he was the picture of benign political authority. But Thierry knew he was anything but the benevolent, people-oriented leader that the media was coached to portray.

“Mayor,” he greeted. He sensed Eduardo, who had been walking at his side with his rolling garment bag on the way downstairs to the car, stepping away unasked to give them privacy. That was to be expected. The mayor made no secret of his disdain for Thierry’s assistant, and would likely have ordered Eduardo to leave them.

“Walk with me.” The mayor didn’t wait for a response but led the way slowly down the hall.

People gave them a wide berth as they proceeded.

“All set for your trip to New York and Boston?”

“Yes. Just heading down to the car now to catch my flight,” Thierry hinted.

“It’ll wait for you.” Apparently the mayor wasn’t always as oblivious as Thierry had hoped. “I’m guessing that our Immigration Bill will be a topic of conversation after hours,” the mayor got straight to the main point of the conversation.

Thierry gave a brief nod. “That’s to be expected. It’s a big move for Chicago.” Which was a major understatement.

The Bill was being touted as a step forward, allowing more freedom of movement for classes of people who’d traditionally had a hard time affording the travel papers, or who had been disqualified from moving around the city—or out of it—for one reason or another. However, Thierry and Eduardo had heard whispers behind the scenes about it having a more nefarious purpose. No leopard changed its spots that quickly…unless it was deliberately camouflaging itself. The political system in Chicago was beyond corrupt—it was dangerous. And the United States had very little say in what happened in the city. It would take almost an act of war to get the US to intervene in state affairs.

“I trust you’ll be a good ambassador as usual, particularly for the Bill and its benefit to the people of Chicago.”

“Of course,” Thierry automatically agreed. That was his job, after all—being a genuinely good public face on the rotten body of Chicago’s governance.

It turned his stomach.

He could feel his legendary patience slipping. A hint of movement to his right—Eduardo was evidently anxious to get him away from the mayor as well. Whether it was because he didn’t want Thierry to run late or because he sensed his impatience was a toss-up.

“My apologies, Mayor, but Deputy Mayor Alexander needs to—”

“Fine, fine.” The mayor gave Eduardo a slight sneer that put Thierry’s back up.

He swallowed down his distaste, transferred his briefcase to the other hand and held out a hand to shake. “Thank you for your time, sir.” He hated having to toady to the slimeball, but the only way to stay in a position to possibly do anything about the city’s blight was to play along. It was a dance of mutual need and distrust between Thierry and his few allies, like Eduardo, and the rest of the damn power players in the city.

With one last hard grip, the mayor let go of Thierry’s hand. He barely kept from wiping it on his pants, then tipped his head in a goodbye before striding down the hall, Eduardo at his side.

This was amazing and I had so much fun with it. Of course, I was on the edge of my seat waiting to see what happened next. I loved it and want to start reading the whole series once again. It gave...

Bonfire Heart brings the story full circle.  The machinations that the “resistance” went through to Read more reviews

Share what you thought about Bonfire Heart and earn reward points.