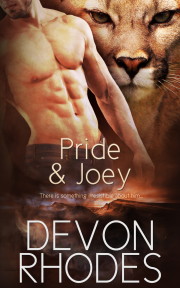 Vance thought his pride meant everything to him…until fate sent Joey into his lair and into his heart.

Vance has grown up the odd one out in a macho and very insular pride of lion shifters. Differences like enjoying the cool fall weather are bad enough—his pridemates would kill him if they learned he was gay. Still, his pride is all he knows. He’s never even met a shifter of another type…until he discovers an unconscious cougar male in his lair.

Joey is on the run and wants to keep Vance at arm’s length, especially since someone very close to the lion is at the root of all his troubles. But there is something irresistible about Vance, something that has Joey wanting more than he has ever dared to dream.

When their lives are threatened, Joey must choose whether to sacrifice himself, or try to live and keep Vance close…for the very short remainder of his life.

Publisher's Note: This book has previously been released by Pride Publishing. It has been revised, expanded and re-edited for re-release.

Joey slid into his favorite clubbing pants, wincing at how loose they hung once he fastened them around his hips. He remembered having to go through a lot of effort to wiggle into them in the spring. He would have to pay attention to how low his pants slipped now that they weren’t skin tight. Angling to the side, he checked out his ass in the mirror, relieved that he still had a booty, just not as nice as before.

Good thing, since he was going out to shake what his mama gave him for the first time in forever.

He put on his low boots and snorted at the thought of his mom in conjunction with dancing. They weren’t close—few cougars were. She was different from most females, though, in that she was very career-minded and had only one offspring. Typically cougar shifters had many half-siblings, which helped to alleviate the fact that their parents usually had territorial issues with staying close to their children. Indeed, Joey had no idea who had fathered him and if his mom knew, she hadn’t ever said. It probably wouldn’t have occurred to her that he would even want to know.

After gathering his wallet and phone, he let himself out of his simple apartment and locked up behind him. From experience, he paused at the top of the stairs to make sure he had his balance before starting down. He’d developed vertigo of late. So he had a firm grip on the handrail, even though he really felt good today, which was why he’d decided to go out this evening.

That grip was what gave him a fighting chance when a large man vaulted up and over the edge of the stairway from the darkness below. Reacting on instinct, which was screaming that the man meant him harm, Joey followed suit in reverse. He swung himself up and over, dropping to the sidewalk below, gravity ripping him free of the other shifter’s grip.

Out of the frying pan…

“Thanks for coming out of your den and making this easy.” The other, even larger shifter—lion, maybe?—had been waiting for him below, and this time Joey didn’t have anywhere to retreat. He braced himself to fight, but a third, unseen assailant slapped a noxious cloth over his mouth and nose and held it there.

Joey stared at the huge blond lion in front of him, burning the smirk into his memory as the first guy rejoined his friends. He felt the prick of a needle in his arm and the lights began to go out.

He really felt like crap today. Joey let out a groan as he began to turn over. Good thing he hadn’t gone out dancing like he’d—

He reached the limits of something bound around his wrist and ankle, which halted his progress, and he abruptly recalled his circumstances. He had left his apartment and had been—what? Abducted? Really?

Not raped, thankfully. His pants were still on, though they’d stripped off his shirt and boots. Not beaten either, though he was super sore. He really had to pee and now that he was awake and aware, he was incredibly thirsty. So he’d been here for a while—a day or two? Wherever here was.

Some farmhouse, by the look of it. Definitely not a modern dwelling, and not in the city, either. He couldn’t hear any traffic or noise of any kind. And it was dark—super dark, like you just don’t get in an urban area with light pollution. The somewhat incongruous frilly curtains were parted, and he could see stars in the night sky but very little artificial light.

He strained to listen for anyone nearby, and that was when he heard the murmur of masculine voices. The deepest one he recognized—the man he’d almost landed on when he’d vaulted over the railing. An alpha voice, even when speaking softly on another floor. Cougars didn’t have the pride structures of other species, but that didn’t mean Joey didn’t know an alpha when he heard one.

What he didn’t know was why they were bothering with him. He worked from home, kept to himself and just went about his life. Sure, this year had been weird since he’d come down sick, but even that hadn’t put him in contact with that many more people. He had no clue who he could have pissed off to the point where the lions had planned to take him, because it definitely sounded like they’d been coming for him, what with the comment about him making it easy. It was true—even three shifters would have had a much harder time taking Joey if he’d been locked up on his home turf.

Why the hell had he decided to go out anyway?

After testing his bindings and finding that they held fast, Joey tried to get comfortable. All he’d wanted was to be around people for a change. Most cougars were very solitary by nature, and he generally was, but he sometimes craved interaction with others. And, well…he was a healthy male and he hadn’t gotten laid for a long time. Hadn’t been up to it for months until the fateful night he’d decided to go out.

Getting kidnapped had taken care of that craving, though not in a good way.

He tried not to tense as he heard footsteps coming up the stairs. A few of them creaked, even though the person was obviously trying to be quiet.

The door moved and, again, a creaky hinge sort of defeated the purpose of opening it slowly. Joey rolled his eyes. He couldn’t see any advantage in playing possum, so he took a bit of satisfaction in the slight jump that the man gave when he met Joey’s gaze. It was the first man—the one who had been on the stairs. Joey relaxed even further. At least it wasn’t the alpha. This guy he could probably take if he got a chance to get free.

A minute later, all three lions made the formerly spacious room seem small.

“Get him up, Lare. Last thing we need is him pissing all over and leaving cougar scent behind.”

With all three of them looming over him and how weak he was at that moment, there was no way Joey could make a break for it. So after his bindings had been released he passively allowed the two followers to roughly tug him up, out into the hall then into a bathroom. The quiet one stayed with him while he was on the toilet and even let him wash his hands afterward then gulp down about ten of those little shot-sized paper cups full of water from the tap.

“That’s long enough,” the red-haired one—the one Joey thought of as the weak link—ordered, pounding on the door. Lare—Larry, maybe? Strong But Silent didn’t have a name apparently. That one rolled his eyes, then beckoned Joey. He seemed reasonable enough, but Joey didn’t want to test him.

I loved the tense nature in this story. It kept me intrigued and engaged to know exactly what happened. The twists and turns just kept on coming.

This short story packs a lot in and made me wish it was one of a series, as Brady needs his story telling too! Set over a short period of time, but fitting with the shifter dynamics, we are treated to a...

Share what you thought about Pride and Joey and earn reward points.