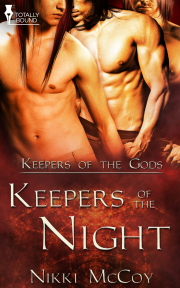 Keepers of the Night

Book 3 in the Keepers of the Gods series

Through the aftermath of one God's lust for power, three men must find the courage to love and forgive if they are to survive the ruthless schemes of a Goddess bent on revenge.

Malen and Turek thought they had found completion when they found each other. Despite the pain of their pasts, they were able to form a bond built on trust and forged in faith. When the call came to once again rise up against the cruelty of Mikel, the son of Death, they were among the first to answer-to battle alongside their friends and defend their race. It was when Mikel's reign of terror had been brought to an end, however, that their true battle began.

Xilonen was a man on the edge of desperation. Throughout his tortured life, he'd dreamt about finding and pleasing his mate. But when the time finally came and he met the two men destined to be his for all eternity, his dreams were brought to a shattering halt. Forced to betray his Gods, his kind, and his mates, Xilonen went on the run. But soon he found that he alone could not protect his brother, Shayne, from the cunning plans of their mother, the Goddess of Night. He needed strength, guidance and courage.

He needed Malen and Turek.

Now they must find it within themselves to move past the pain of betrayal and lies to the love and faith that could bind their hearts. But will they find it in time to stop Night from stripping Shayne of what she had so heartlessly taken from Xilonen…his innocence?

In the early morning light, the familiar terrain of the Sierra Blanca mountain range came into view. Snow was just beginning to melt from the treetops and animals were emerging from their winter shelters to greet the coming of spring. The greenery of the forests was a welcome change from the constant glare of city lights and haze of pollution that cloaked the stars at night. But there was no relief to be found in the tranquil atmosphere. He was beginning to think there never would be until their search was over...and even then only if it was successful.

Anger seethed and broiled in his gut. At this point, he was ready to kill the very man they were trying to save. For months they’d been travelling almost nonstop. Malen had lost a family he’d been a part of for centuries and turned his entire life upside down.

And for what? A brat who obviously didn’t want to be found, much less helped. For the third time that morning he cursed his rigid sense of responsibility.

It was like they were chasing a shadow in the dead of night. One that was purposefully eluding them, for reasons he hadn’t the slightest clue about. And yet he knew he couldn’t give up. By some maddening twist of fate, he and Turek had been given another mate—a man born with the unique qualities that should complete them. However, those qualities had yet to be revealed to him.

Yes, Xilonen had prevented the slaughtering of an army of Keepers gathered to defend their race, of which Malen and Turek had been members, but he’d done so at the needless expense of others’ lives. Then there was the question of his involvement with Mikel, the half-God who had started the rebellion. During the final battle, it had appeared as though Xilonen had given the defenders an edge by distracting Mikel and his men. If that were the case, however, why had he fled the scene afterwards instead of owning up to his actions?

Things just didn’t add up where his second mate was concerned.

Frustration rivalled his anger and he wondered just what in all the Gods he was doing chasing after a halfling who wanted nothing to do with him. But he knew why. A picture of the man who plagued his thoughts and dreams popped into his mind.

Xilonen was everything and nothing he would have envisioned in a mate. Physically, he was breathtaking. Lean and finely boned with a sinuous layer of muscle underneath pale flesh. Above full lips and a straight, pert nose was a set of thickly fringed eyes coloured the most striking shade of electric blue that Malen had ever seen. His long, silken hair had often fallen across his face the times Malen had seen him, hiding it as though to add mystery to his delicate features.

All of this beauty, however, was distorted by a veil of distrust and a fuck-you attitude. Malen understood that everyone was entitled to physically portray themselves in any way they felt comfortable, but one couldn’t help but get the distinct impression that Xilonen looked the way he did in order to repel others. Malen’s mind also couldn’t keep from wondering what kind of person hid behind that two-toned black and red hair, the multiple piercings, and black, gothic-style clothes.

And would that person ever want to get to know him and Turek?

Malen shook off the painful tightening in his chest. He couldn’t afford to let his emotions get in the way. He would find his second mate and keep him safe until the threat to his life passed. What Xilonen chose to do after that was completely up to him.

Thirty minutes later, Malen pulled into the garage and cut the engine to his Harley. Turek was already off his bike, saddlebags in hand, and waiting for him by the door. Malen gathered his own luggage and kissed his mate briefly as he entered their cabin. He threw his bags carelessly onto the couch then made a beeline for the stairs leading to the den below.

"Where are you going?"

"I’ll be up in a few," he said without looking back. "Just need to take care of something first."

Like the pent-up frustration that was riding him hard. A whisper of strained energy from Turek brushed his senses as he rushed down to their gym. He knew he wasn’t being fair to his mate. Turek was suffering just as much as he was. They were no closer to finding Xilonen than they’d been from the start, and the stress of racing to get to the man before someone else did was beginning wear on them. But at that moment, he didn’t trust himself to keep a lid on his personal doubts.

Grabbing a pair of loose shorts and a tank top from a small dresser in the corner, he quickly changed and pulled his hair into a band at the nape of his neck. The cold, padded bench felt good against his heated skin. It was easy to fall into the familiar rhythm of his workout. Thoughts were lost to the burn of muscles being pushed beyond their endurance. Sweat trickled down his temples and between his shoulders blades and still he pushed harder. When exhaustion hit, he wanted it to be deep and consuming.

One period of rest without the constant stress of responsibility. That was all he was asking for.

It was while he was on his back, arms stretched out to his sides with a cap barbell in each hand, that he felt the front of his shorts pulled down and a streak of hot moisture swipe the tip of his cock. Malen dropped the weights and lifted his head in time to see the mischievous glint in Turek’s caramel-coloured eyes before they were covered by his mane of light brown waves. A low hiss escaped Malen’s mouth as scorching heat engulfed his cock in a single move. Blood pooled to his groin and the sudden swelling of his dick had him gasping for air. His mate’s throat muscles began to work the sensitive head mercilessly.

Just as swiftly, Turek came back up. The suction of his mouth was so tight that Malen’s cock had no choice but to obey its demands. It lengthened and filled to its full girth until the lips that surrounded it were stretched wide. Another swipe of the tongue across the weeping slit and those lips were once more buried in the coarse hair at his base. Malen resisted the urge to thread his fingers through the other man’s soft hair. One touch and he wouldn’t be able to restrain himself from taking over—assuming control as he set his own furious pace.

Turek was extremely submissive in the bedroom. So much so that Malen had to constantly monitor his aggressiveness. Watching his mate bend to his will—hearing him beg to be taken harder, rougher—was the strongest aphrodisiac he’d ever experienced. With his long, sculpted body and coiled strength beneath golden skin, Turek exemplified everything he’d ever wanted in a lover and a partner.

The occasions on which his mate asserted himself sexually were different but no less stimulating. They also took place only when Turek was trying to prove a point...and whatever that was this time, Malen knew better than to rush the man into making it. Not to mention the fact that he didn’t want to. Some people chose fighting to get their arguments across. Turek chose displays of love.

I thought the author did a great job with both his personality and emotions. I could really feel for what he'd gone through and the pain he's suffered. I also like his little brother and enjoyed...

Share what you thought about Keepers of the Night and earn reward points.

Other books in the Keepers of the Gods seriesView Series Page