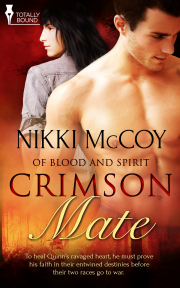 Book 1 in the Of Blood and Spirit series

A war is brewing. One that could end everything unless two men can learn to trust their hearts and break the barriers that separate them.

A centuries-old feud has pitted Ba’Kal—shifters—against Vam’kir—vampires. Quinn has suffered the pain of the ongoing contention in ways that no man ever should. Once the respected son of the Vam’kir king, his life was forever altered the day his father realized a truth of which even Quinn was unaware.

As the Ba’Kal ruler, it is up to Manning to seek justice for the vicious attacks the Vam’kir have perpetrated against his kind, but his very beliefs are called into question when he discovers that his mate is also his enemy. To keep Quinn safe, he must learn to trust in the impossible—that love might exist beyond boundaries—for failure means the end of his future and that of the rest of his race.

Manning stepped into the terminal from the portable walkway and took a moment to acclimatise. New scents of body odor and cologne assaulted him and the clamor of bustling life rang in his ears, but the floor was firm and steady beneath his boots. After the past six hours of confined air travel, that was all that mattered.

“Oh, sweet mother of solid ground, how I’ve missed you,” Tailor blurted beside him.

Manning looked down at the prostrate form beside him. Tailor was doubled over and rubbing his cheek almost obscenely on the thin, checkered carpet. Passengers still filing from the plane behind them craned their necks to stare at the spectacle, giving the man a wide berth as though his behavior might be contagious.

With a sigh, Manning rolled his eyes as his friend continued to murmur sweet nothings to the floor. “Are you done yet?”

“Just give me one more second.” Tailor caressed the carpet a little too fondly for Manning’s peace of mind then stood to his full six foot three inches of height, rifling a hand through his long, golden hair. “Okay, I’m good.”

Cain shook his head and, with his wide frame, began clearing a path through the throngs of people rushing around them. “Seriously, man, do you have to do that every time? You’re a fucking bird. The sky is your natural habitat. What’s wrong with you?” The words were muttered under his breath, too low for anyone but them to hear.

“It’s unnatural to fly with a man-made set of wings. And you can’t tell me you don’t feel the same way.”

Cain grunted but didn’t comment further. Not even Manning could argue with Tailor’s statement. Being separated from nature with no option but to endure cramped spaces more than thirty thousand feet above ground level for hours on end was more than a little unsettling. With earth-bound spirits, air travel was especially brutal on Manning and Cain, but they had no other alternative. For two months they’d been traveling with haste to every shifter community in the United States, and Manning was beginning to think going overseas was inevitable.

His feline bristled instantly at the idea, its rumbling contentment at being grounded dissipating in the face of its ire. Manning fought down his own frustration in an effort to calm his spirit. They both understood the time constraint they were under, but that didn’t lessen the strain of the objective.

“Tailor, get the car. We’ll meet you out front.”

Tailor gave a nod then veered off toward the car rental station while Manning and Cain took the stairs down to the baggage claim area. After gathering their luggage, they walked outside to wait, grimacing at the cloying Sacramento heat that settled over them. Manning stifled a silent prayer that he would be able to return to the cool, welcoming shades of the forests surrounding his community after this. He didn’t want to build up his hopes only to deal with the pang of disappointment if this trip turned out to be just another failed attempt at his goal.

After several minutes, a fire-engine red BMW convertible pulled up in front of them and Tailor jumped out of the driver’s seat. He spread his arms wide and broke into a huge grin. “Beautiful, right?”

Manning and Cain shared a look between them.

“What? It was all they had left, I swear. Damn people preferring their modest, economical cars. I was lucky to get this one. You’ll thank me later.”

While Tailor jogged around the vehicle to put their bags in the trunk, Manning slid into the passenger seat and watched Cain stroll to the other side and barricade the driver’s door with his body.

The big man held out his hand expectantly when Tailor came back. “Hand over the keys.”

Tailor gaped then snapped his mouth shut. “I paid for this ride. There’s no way I’m letting you drive it.”

“You should’ve thought about that before you insisted on driving the last car. It’s my turn now.”

He voiced a string of expletives that drew more attention than his earlier ritual of supplication then got into the back seat and didn’t quiet until Cain was navigating through lunch-hour traffic on the highway. Manning dialed through the radio stations absently and stared out at the sea of smog and overcrowded buildings through his window. He wondered with no little irritation how the hell the residents of the city didn’t suffocate in their own prison of technology and concrete walls. What little nature that did exist had been manufactured as well. Sparsely constructed parks and golf courses were more a tribute to what had once been a fertile land than places meant for relaxation.

A loud harrumph to his left pulled his attention away from the window. Cain’s gaze dipped to the radio console then met his again.

“Shit, sorry, man.” Manning hit the power button, silencing the rap music that had been blaring from the speakers, and scrubbed a hand over his face. “Where are we going this time?”

Cain assessed him shrewdly before answering. “The community is about an hour east of here. We’re meeting the Alpha’s daughter at a café then following her to meet the rest of the pack.”

“And when is our flight out of here scheduled?”

“One week from now.”

Manning shook his head. “Make it sooner. I’ll meet with the pack after I’m done discussing our plans with the Alpha and his Betas. Our business should be concluded in a few days. No unpacking this time. We’re getting in and out. Clean and simple. Contact the communities in England and Africa, and let them know we’ll be going there after we hit up Texas. Purchase the tickets before we leave here and see to it that Australia is the last stop on our trip overseas. If I recall correctly, the Alpha of the community there has eight daughters. I want to put off that nightmare for as long as possible.”

The corners of Cain’s mouth turned down in a disapproving frown. “Your father would be disappointed if he heard you talk like that about finding your mate.”

Manning ground his teeth at the soft reprimand. His father was at home, in pain and awaiting a death he wouldn’t take because his only son hadn’t found a mate yet. Manning wanted nothing more than to focus on taking revenge for his mother’s murder first then start a family later, but he couldn’t, not before ensuring the continuance of his line. “There isn’t time to make with the pleasantries and deal with the bullshit of convincing every unmated female I meet that she’s not the lucky winner.”

“And when you find her, how do you think she’ll feel about being impregnated then left at home while her mate is gone for months at a time?”

“Are you saying I shouldn’t seek justice on my mother’s behalf?”

Cain’s barrel chest heaved with a long sigh. “No. I’m saying your mother wouldn’t have wanted you to sacrifice the joy of finding your mate for the sake of producing heirs and taking revenge. With the way you’re going now, you might not even be able to convince your mate to bond with you. It can’t be forced, you know.”

Manning snorted. “I don’t think I’ll have a problem in that area. All the females I’ve met so far are practically fighting over the privilege to become the mate of the new Jaes’din.” In truth, Cain was right, but Manning just couldn’t see any other options than the one he was taking.

The plot is an exceptionally fascinating mystery romance combination.

This steady to fast paced and smooth flowing plot keeps readers captivated with a fascinating new world with some interesting elements that make for a refreshing change.  The well written scenes and...

Share what you thought about Crimson Mate and earn reward points.

Other books in the Of Blood and Spirit seriesView Series Page