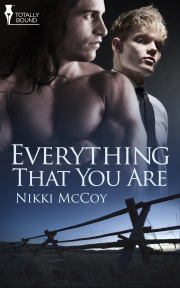 Everything That You Are

In a foolish moment of pride and fear, Michael cast aside his destined mate, leaving Kaden to suffer the brutal consequences, but he will risk anything, even life itself, to make amends and win his mate's love.

Born of the union between a werewolf and a mage, Kaden was forced to hide his existence and power from both species. But when a stranger crossed his path one night, he was tempted to risk his heart and life to meet this man. They were not alone, however. An alpha witnessed Kaden's harsh rejection and kidnapped him immediately afterward, subjecting him to years of torture and manipulation of his power.

Michael, a newly made alpha, had never been attracted to men, so when he discovered that his mate was male, shock and fear caused him to make the worst decision of his life. He spurned Kaden and the love the younger man offered. Ridden with guilt and loss, Michael went back to search for his mate only to find him gone.

After four years of scouring the countryside for Kaden, fate brought them back together, but Michael finds that winning Kaden's heart is not his only challenge. Kaden's kidnapper will never give up his obsession with the young beauty, but neither will Michael. Will their love be strong enough to defeat evil and the burden of past mistakes?

Michael followed his friend into the nightclub and immediately cringed at the assault on his senses. Loud music blared from speakers placed strategically into the corner panels of each wall. The air was cool but held the scents of alcohol, tobacco, and too many desperate bodies squeezed together, trying to find release, if only for a few hours.

The crowd was full of both young and middle-aged gay and lesbian people, which surprised Michael. He’d expected to find nothing but a bunch of spoilt brats with too much of their parents’ money to know what to do with.

Nick had insisted on celebrating Michael’s ascension within the pack with a little bit of ‘sexual variety’, as he had so delicately put it the week before. Apparently, Michael’s stale sex life of heterosexual one-night stands with no emotional involvement was getting to the man, although why, he had no idea.

Nick was determined to see if the reason for his emotional detachment was because he hadn’t been looking in the right places...or at the right sex. What Nick didn’t understand was that not only did Michael need to find a female to have pups with, but he also wasn’t ready to be tied down in a relationship yet, even if he had just been proclaimed the new Alpha of his pack.

Kids and chains and further obligations could come later. For now, he was going to enjoy his freedom a little longer. Tonight, however, he would go along with his friend’s antics, if for no other reason than to indulge him.

He walked with Nick to the bar, ignoring the lust-filled glances of men as he passed by them. He did, however, notice several attractive women he wouldn’t mind taking home for the night. Unfortunately, they were wrapped around other females he didn’t think would be open to sharing.

“Beer?” Nick yelled over the rumbling blast of music as he flagged down the bartender. With their advanced hearing, it wasn’t necessary for them to compete with the blare of the noise around them to hear one another, but it was a human bar, and such things were the norm in these places.

“Make it a scotch. I have a feeling you’re going to try to get me laid tonight and I’m not sure I want to be completely sober for it.”

Nick shot him a devilish grin and ordered the drinks before saying, “Has a guy caught your eye already?”

Michael snorted. “No, but I’ll bet plenty have caught yours.”

Nick laughed and introduced him to a couple of his friends who were sitting socialising around the bar, then paid for their drinks and led them to one of the open tables lined up against the far wall. Michael finished his drink in one gulp and flagged down a waitress for another before casting his gaze out over the sea of undulating bodies crowding the dance floor.

He tried to keep track of the couples that came over to greet Nick, and politely blew off the few men brave enough to ignore his air of nonchalance and approach him for a dance. After a while, he began to lose interest. He had long ago decided the whole club dating scenario was a bit too tedious for his tastes. He much preferred his partners to come to him.

That’s when he saw them. In two large cages with wide-spaced bars, suspended from either side of the ceiling at the far end of the club, were a man and a woman dancing almost obscenely to the rhythmic beat of the music. Their movements were graceful and hypnotic, but it was the man in the cage to his left that caught his attention. His lithe form moved like liquid and the definition of his toned muscles was clear to see even from this distance.

The transparent mesh shirt that ended at his abs and black, leather shorts were adorned with chains that crisscrossed his chest and thighs and emphasised the wide expanses of pale skin that were showing. Michael realised he was holding his breath, much like he had while watching professional ice-skating or the ballet on the occasions his mom had tried to force culture on him.

He slowly let the air from his lungs and felt the hardening of his cock as he continued to be riveted.

The man was captivating.

And Michael was hardly the only one to notice. There was a small gathering of men surrounding the base of the cage, which hovered about three feet from the ground. The younger ones were trying to emulate his moves while casting furtive glances his way. The older ones were either swaying slightly or not bothering to move at all as they blatantly ogled the young dancer.

Michael hadn’t realised how caught up he’d become in the scene until he started at the feel of a hand on his elbow. He turned to see Nick with a knowing smirk on his face.

“We’re here to take advantage of the available people, not the sexy advertisements on display.”

Michael managed to pull his gaze away from the spectacle long enough to give his friend a confused look and ask, “The advertisements?”

Nick looked back over to the figure in the cage Michael had just been transfixed by and grinned. “Yeah. Those people up there get paid to dance and attract the crowd that comes in here every night looking for sex on a stick. I gotta say, though, that guy does his job very well.”

Michael had already focussed his stare back on the man, who was now kneeling down to unhook the bottom latch of the door to the cage. “Yeah, he does. Where is he going?”

Exciting, loaded with action and filled with surprises...Nikki McCoy has penned a book that should be highly recommended for those of us who love stories with paranormal aspects, MM loving and suspenseful...

Share what you thought about Everything That You Are and earn reward points.